A sick cria at Beck Brow. 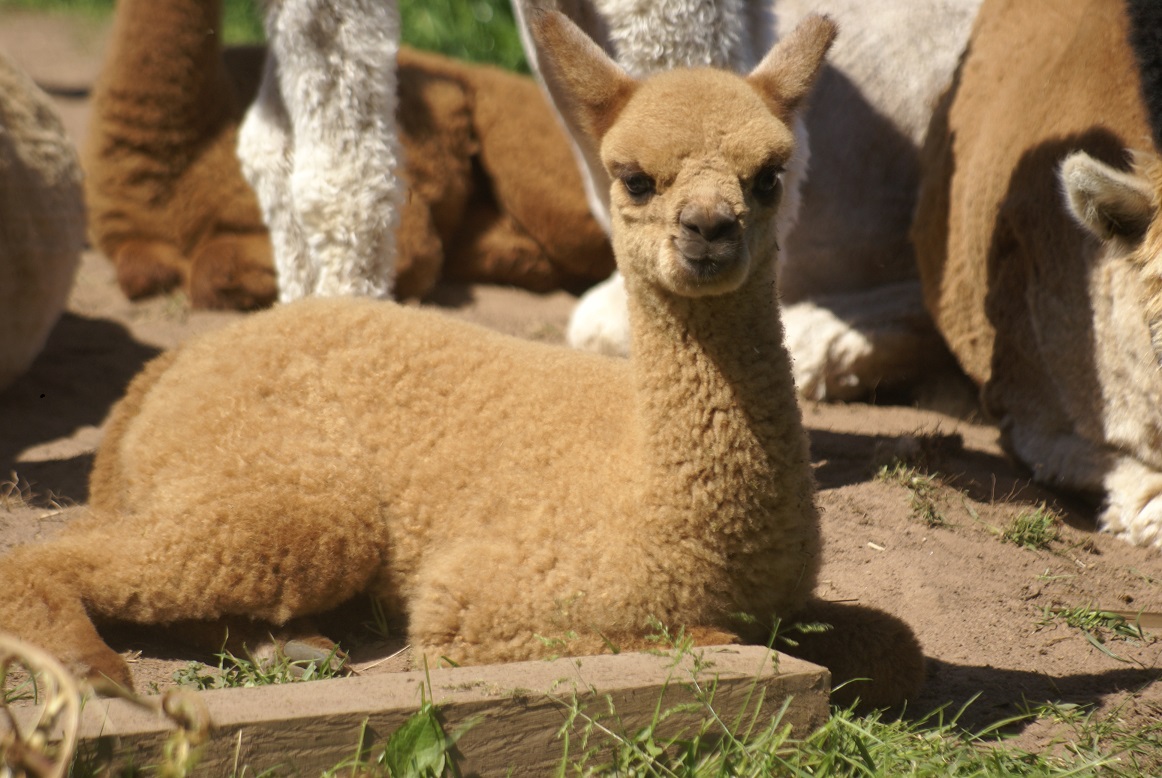 Where does the time go? When Paul decided to work at Beck Brow full-time, one of my missions was to blog more consistently, but we seem to be busier than ever. We always seem to end the day with a list of jobs for tomorrow! It does rather remind me of a fairground in full swing at the moment, and whilst we haven’t ventured on to the roller coaster (yet), we have alternated between the waltzers and the dodgems. Just when things looked to be back to plain sailing we have a sick cria crisis…

Furze Park Elvira is the sweetest female and so proud of her Explorer daughter. She lost her first cria at 3 weeks of age to an infection, so this cria is especially special.  Little E (we haven’t formally named her) had great weight gains from birth and was up to 16.5kgs at five weeks of age. A beautiful female with a fabulous fleece.

It was a warm afternoon 11 days ago, when I noticed Little E drinking a lot from the water trough and I warned her to be careful of getting colic (she didn’t listen). Four hours later, Paul did the evening rounds and noticed that she was hanging her head slightly…not colic…but very subtle signs of neurological deterioration. Further investigations revealed signs of infection (red gums, eyes and pyrexia). We started her straight away on a broad spectrum antibiotic (one which would cross the blood/brain barrier). She was also given vitamin B1 and an anti-inflammatory. The next morning we called the vet as we were concerned about her hydration status, as she had stopped nursing and was refusing a bottle (she was still drinking water from the trough). She was now hanging her head and was showing signs of avoiding light (she hung her head in a bucket). Fearing Meningitis we prepared for the worst, but decided to keep fighting, unless we felt it wasn’t in her best interest. The vet introduced an additional antibiotic. This was prescribed for 10 days, but I don’t think she believed Little E would see the course out.

We have been on her case from dawn to dusk. It’s been tough, there have been times we nearly gave up, and she is not out of the woods, but Little E is still here and even did a little skip on the way into the barn this morning. Our biggest problem now is getting some weight back on her. She is down to 13kgs. Initially, because she lost the ability to suckle and we struggled to get enough calories in. Then she has had an upset stomach (possibly due to antibiotics) and has also had some coccidiosis. Annoyingly, we had dosed her with the Baycox equivalent when she took ill (stress can allow cocci to take advantage) and this obviously hadn’t worked. She has now had Vecoxan. This morning she took 100mls of milk from the bottle willingly. She picked at the food in the trough and had hay in her mouth. I hope I don’t jinx her…but I have hope…I have prayed for this little one so much. Please can we be off the dodgems now and back on  the waltzers!

For those who are interested (and we are not vets so not advising) as well as antibiotics Little E had probiotics and also yoghurt; Vit B12 as well as a lot of Vit B1 in the acute stage, AD&E and phosphate, selenium and latterly Combivit. She also had Kaolin. After the initial 2 days of anti-inflammatory administration, it was decided the risk of stomach ulceration was too high as she no longer appeared to be in pain. 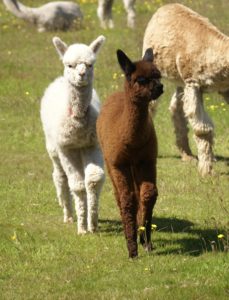 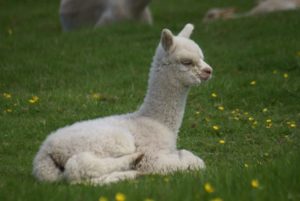 Paul has been a great help with Little E, which has allowed him to be given a verbal warning, rather than his cards yesterday. We are so busy with drive-by stud services most days, when we get the chance we need to make sure we service our own females. So some mornings its non-stop matings before clients arrive (different males). This year I decided to stick closely to my plans of who to mate with whom (some years I change because a male has already been used and I want to get on…or some other poor excuse). Thus as I saw Paul lead Black Sabbath away from Havannah…there was a piercing NOOOOOOOOOOOOOOOOOOOOOOOOOOOO…I said mate Chaska with Black Sabbath not Havannah. Argh. Havannah has had a fabulous brown female with Samurai. This mating was definitely to be repeated. The two females have ear tags so Paul’s usual excuse is not allowed. Lets hope she sits next week…or maybe Paul has made a fantastic breeding decision!! Poor Paul, he is off to the the BAS AGM today for some light relief.

Paul did have a day out last Tuesday, as he made the long journey down to Bozedown Alpacas in Reading. Leaving home at 7.30 am and returning at 8.45 pm; he brought home with him a V.I.P and his companion. If we had had a red carpet, I would have rolled it out…Yes, Bozedown Blaze of Glory has arrived and is looking magnificent. We are delighted with our decision to have Blaze cover our Explorer daughters. He is the man for the job. Although, bless him, he is only two years old and was rather shy about performing in front of strangers. We have given him a few days to settle in (and to decide he likes the girls more than he likes his friend Republic – we had to have Republic there to watch). He is now working well. More excitement. More waiting. More wishing our lives away. 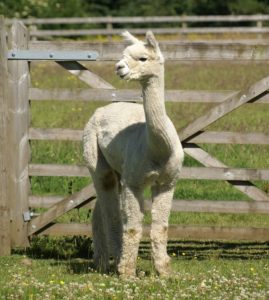 Getting the young boys working can be a challenge, and often requires a bit of teasing from an experienced male mating nearby, and an experienced female who sits immediately. However Rubic took to his stud role immediately. Working at his first introduction to a female (who didn’t sit as readily as hoped) with no sat nav required (if you get my meaning). What is particularly impressive is that he worked this well at 21.5 months of age. However, he had spent the whole of his life having the unwanted attention of Bees Knees, so was probably just pleased to change positions!

Delphi’s cria (Mykonos) was slow to gain weight initially. He was born prematurely and Delphi was a little short of milk. We had been topping him up morning and night, but he started to refuse our offerings. He also started to gain weight, yet Delphi didn’t appear to have any more milk. We had given him a soapy enema (never underestimate how much of a problem constipation can be, crias stop drinking and can quickly get dehydrated) but that couldn’t account for it. Then we saw him…the little tea leaf…helping himself to the very generous milk bar belonging to Celestrial. Celestrial is such a star, she is always topping up, cria. Last year was the only year that she didn’t and By Design was 49 kilos at 6 months of age. I have also seen him stealing from Bedazzle, who is a maiden. He was having a fight with her own cria, who was trying desperately to get him off her milk supply (luckily she has good weight gain). 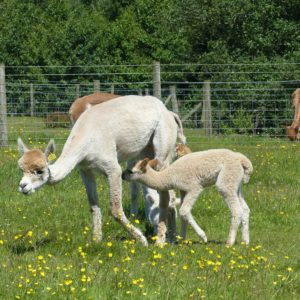 We have 22 of our own cria on the ground. Ten female and twelve male. We don’t have much white this year, as a number of our white x white matings have produced beige and fawn. However, we did get our second white female yesterday (from a fawn dam). Solstice (dam of Hey Now and Hey Baby) produced a beautiful Crusader daughter. Who was trying to stand before her back legs were out, and has never stopped racing about since. At the moment she is Beck Brow Ready Steady Go. 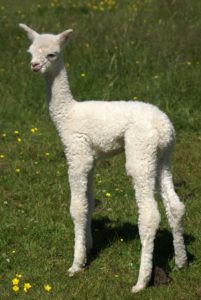 Anything Goes has had a light maybe white male with Explorer: 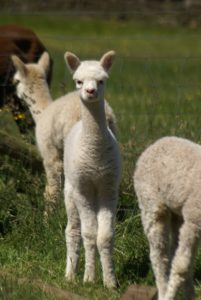 April has had a lovely blue black male (who has been rolling in the dust). The Black Sabbath x St Patrick combination has worked it’s magic again. His owners have named him After Dark. 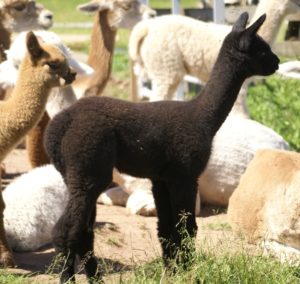 I let the young cria group into the paddock with the blown down shelter today, of course the first thing they did was roll in the dusty area where the mats had previously been down. Below is Havannah’s daughter looking especially dusty (sire; Samurai) 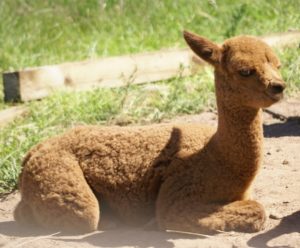 This might just be my favourite cria of the year. However I admit she does not do well in front of the camera. Bedazzle x Crusader have produced a fabulous light fawn female… 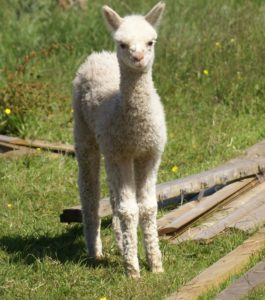 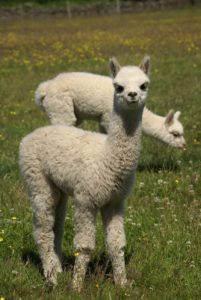 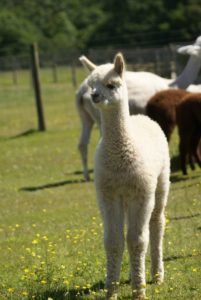 No prizes for guessing who is the sire of Tutu’s cria…a fawn male who is the image of Samurai. Havannah and her daughter Tutu birthed at the same time. We were so busy trying to save Little E, we had two cria sitting kushed when we went to check (Paul had only checked an hour earlier) 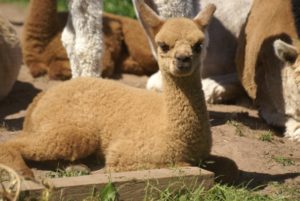 Tutu and her cria (sire; Samurai)

I have to admit to be rather taken with Cool Dude (Suri). He is such a cheeky chappy. Dam; Mystique. Sire; Aslan. 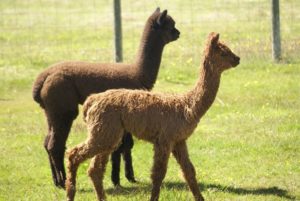 We have a lovely fawn female from our oldest dam. Sonata is 13 years old and her cria has one of the best weight gains. Sire Goldmine. We have named her cria So Sassy. She is such a character. 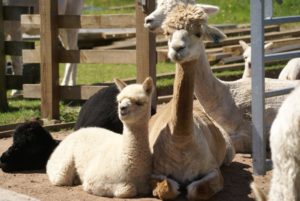 Sonata with So Sassy

Sonata is the dam of Glamour Girl, who has produced a full sister for Vidal. We have called her the Stylist (keeping to the theme). Sire; Goldmine. 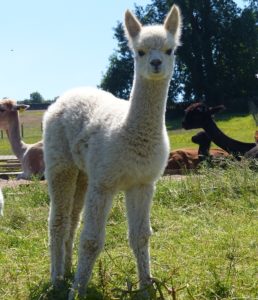 Honaria x Explorer have produced a beige (possibly white) male. This is a full brother to the championship winning family; First Edition, Bottoms Up. Bedazzle and Ditto. We have named him Encore and hope we can repeat the success of his siblings. I have repeated the mating ( a no brainer) and hope I can replace Ditto. This was a difficult decision, as we have not released any of this line. Ditto has an amazing fleece, with an impressive 2.5kg blanket. She will be mated with Blaze of Glory this week. Exciting prospects for her new owners. 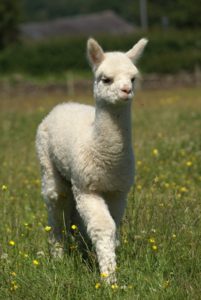 Campari has the most lovely Samuria brown boy, so very dark he just turns out as a blur in the sunshine. You will have to take my word for it…he is looking good! Sunset also has a very dark brown female who is the photo with Little E.

I have been writing this blog in between checking on the birthing paddock and looking after Little E…I have just skipped back to the house. Not only did I get another 150 mls of milk into her at 10am. I have now witnessed her suckling from  Elvira…proper  sucking and for a reasonable length of time. We already have a female called Hallelujah, otherwise…. 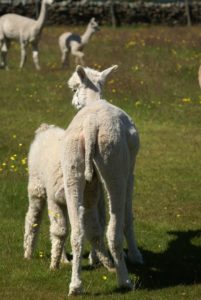