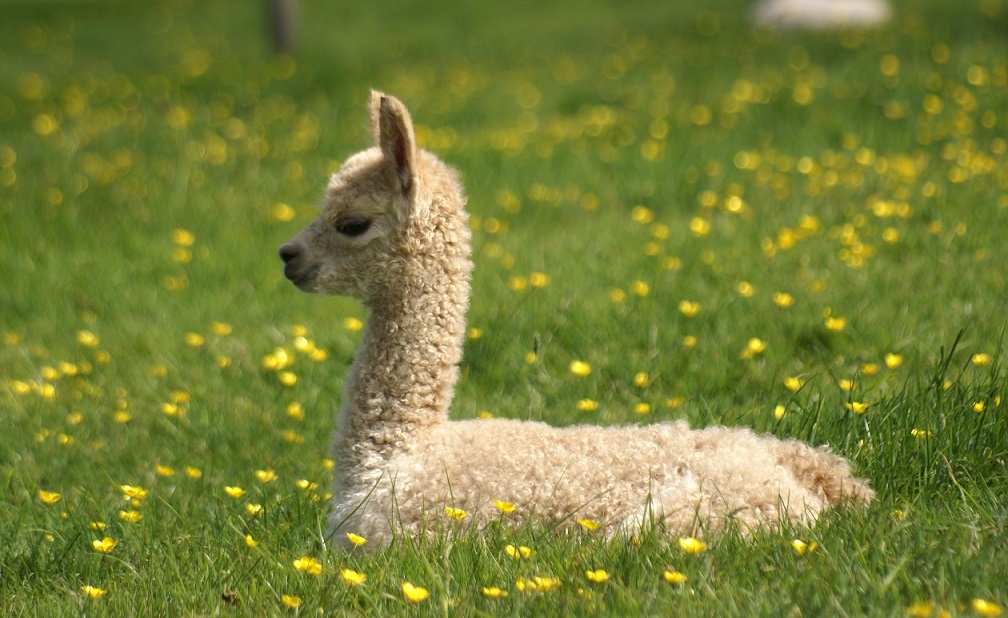 What a crazy week at Beck Brow Alpacas…but we have somehow survived.

The madness started on Monday morning. For the second time this year, I woke in the early hours, and decided to check the maternity paddock. And amazingly, for the second time, we had a female about to give birth…Snooty Boots does have a bit of history (she had Jimmy Choos at 5am) but excelled herself this year with a 4am birth! This of course had to be on the day we were about to start shearing…well it wouldn’t have been a problem, apart from the fact the cria was dysmature. Down on his pasterns and not strong enough to feed, it was all hands on deck to ensure we gave him the best (by that I mean I had Paul get out of bed too…that’s all the hands we have).  Boots has produced championship winning progeny every year, and this little fella is full brother to National Fawn Champion Female; Beck Brow Kiss Me Quick. Thankfully he was happy to take cow’s colostrum from a bottle, and with vitamn B1 injected, he soon brightened enough to kush.

Well, when I say soon, it was in time for Lucie to birth at 7am. A quick check of her bag, and she didn’t appear to have much milk. Thus more bottled colostrum. So we now have three cria to bottle feed whilst shearing (the cria belonging to Pheonix, born at 3.30 am last Saturday, was also a bit dummy and never looked for milk from her dam). As we had changed shearing dates from Saturday, we also had no help, other than Mum and Dad who kept us fed and watered and watched the birthing paddock (thank goodness for all the homemade cake as we needed the sugar to keep going). We were racing all day with so many feeds and fleeces. With so much going on, the naming of Boots’ boy as  Beck Brow Gee Whizz, was an easy choice!

Day 2 of shearing, and thankfully we have Debbie to help, and no births. We are still bottle feeding all three. With shearing over by late afternoon, Debbie stayed to help ‘milk off’ Boots and Pheonix, to keep them in milk. With three of us to help,  we managed to get Pheonix on her side. We expressed some milk and attempted to latch her cria on. No interest shown at all in suckling. We rubbed lots of milk around the teats and let them out. Dam and blast. The cria is now 3 days old and we are starting to loose hope. Then hallelujah we spot the cria feeding. Success!

Another couple of days and Gee Whizz was away and feeding. He is thriving really well and like all Goldmine boys is a proper mischief. Lucie’s milk also came in and her cria is going solo. 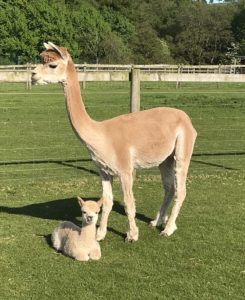 We have now got to Friday, and have caught our breath, when Ep Cambridge Aria goes in to labour. Aria (white) was about to have our first Beck Brow First Edition (white) cria of the year. You can imagine our excitement when she produced a beautiful mid fawn female. Just what we ordered! However, sadly the excitement wasn’t to last. Our young maiden Beck Brow Flirtation was also in labour. We had been worried about Flirtation, as she came off the shearing table unable to walk properly (we though a trapped nerve) but was okay the next day. Possibly unrelated, but she gave birth to a still born male (dead at least a couple of days). A very good looking light fawn male (also First Edition). So we have had the joy. Then the upset. The harmony?…We took Flirtation’s cria away (sometimes we leave them together) as she didn’t bother with it at all. Although we hadn’t noticed immediately…there was actually a very good reason for her lack of interest…she had a cria…she had Aria’s cria. Unbelievably Aria (who is a wise 10 years old) has let her share. They both feed and look after the cria,  who is, unsurprisingly, fit as a butcher’s dog. I think Aria believes she has an unpaid nanny, for in the hot weather I noticed her doing a lot of sunbathing, whilst Flirtation did most of the feeding and running about. What an amazing outcome after such potential sadness for Flirtation. Got to love you Aria x. 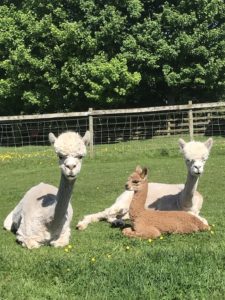 On Saturday we had some family visiting and were walking around the farm, when someone pointed out a newborn cria. A newborn cria in the ‘not due to birth yet’ paddock. Bozedown Delphi had had a premature male. A little beauty of a boy but weak. More cows colostrum (thank goodness we have a good supply in the freezer – I though our farmer friend had been over generous but we are running out). More vitamin B1. 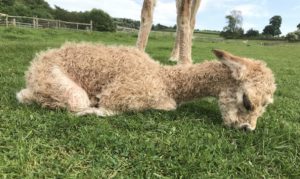 Whilst Paul is looking after the newborn, we carry on with our plan of taking some of the young boys for a walk. Vidal (our multi-championship winning light fawn male) is always first choice for such tasks, but as I go to catch him, I notice a great big gaping tear on his shoulder. Thankfully our vet has done a good job of stapling the wound and he is on a course of antibiotics. In the meantime Delphi’s cria was taking quite a lot of work, with small regular feeds. A big thank you to Paul who did most of the night feeds (we don’t feed during the night unless they are weak). I think getting up t0o often in the night was taking it’s toll. 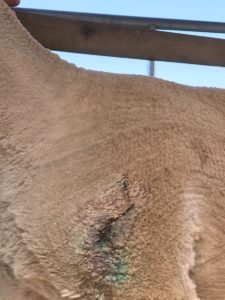 Beck Brow Vidal with his staples (before cleaning yesterday) 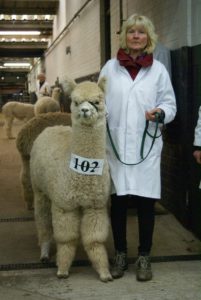 Sunday, Paul is still feeding Delphi’s cria, who will only take 50 mls per sitting. I get up to do the early maternity paddock watch, and find Spring Farm Josephine in labour at 6am. Fortunately an uneventful birth, and a light fawn Suri male (yes nothing bar Suri males again!!). This was followed at 10 am by Beck Brow Parisien (a dark fawn female owned by Robyn and Craig) who produced a blue black female from Black Sabbath. Just time for a sandwich before Beck Brow Hallelujah produced us a healthy white male by Crusader. All this and 25 degrees. We are running around poking cria to get up to drink. Then it was the turn of Beck Brow Bedazzle, who waited until 4.45 pm to produce the most beautiful beige female, with the most incredibly bright and curly fleece. Weighing only 6 kgs, we did wonder how she would go, but Bedazzle is an excellent maiden dam, and had her drinking within the hour. The cria is a bit floppy eared and soft on her pasterns, but doing well. This cria, by Crusader, is top of the cria fleece leader board for us so far. 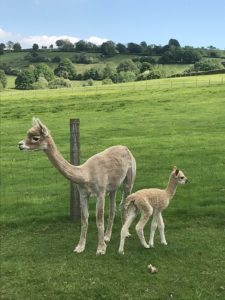 Bank holiday Monday, more sunshine and more cria. I noticed that Vidal’s dam was in labour at morning feed. This was a one I was looking forward to. A repeat mating to Goldmine. Were we going to get another Vidal?…not quite…we got a female version…another beauty…and another who needed colostrum as was slow to get going. We have never had a year like it. Pregnancies that are full term and over, and cria who present as if slightly premature. We are blaming the dreadful late winter weather. She did however get latched on that evening (again we gave vitamin B1). We have named her Beck Brow The Stylist. Our second birth of the day was Beck Brow Applause. A maiden who did an amazing job, feeding her cria before even passing the placenta. A handsome white male sired by Explorer. Then the highlight of the day Delphi’s cria was feeding from mum. so overall a great result…phew! 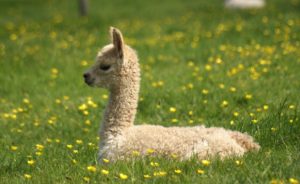 We have 20 cria so far (15 are ours) getting near half way. We are so pleased with the drop so far and with many of our top females still to birth. We just need to make time to do so matings, or we wont be having many next year! 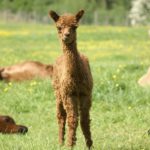 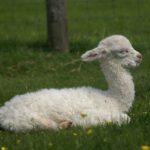 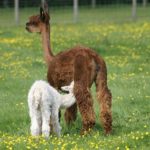 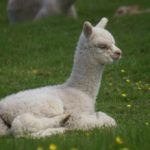 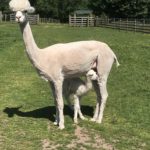