It’s a Wrap-Blaze of Glory and Haylage! 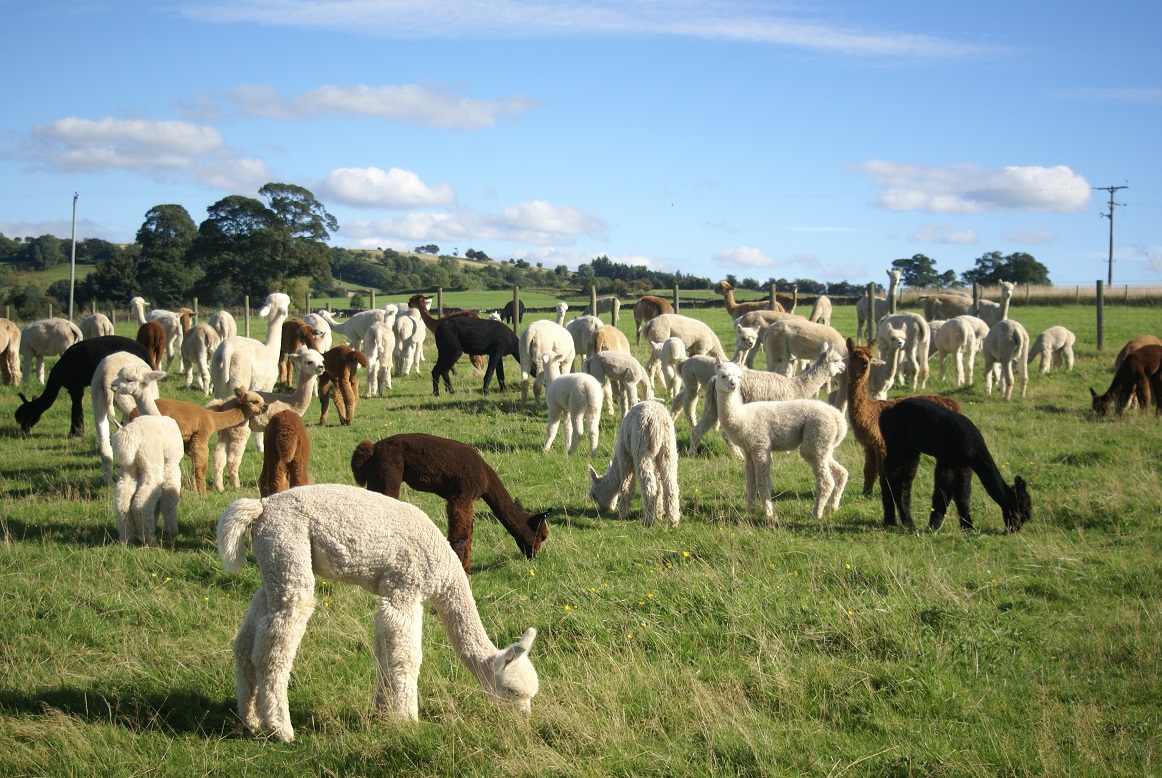 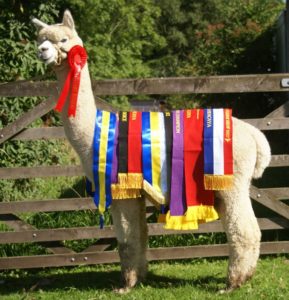 I am a firm believer in the saying ‘make hay whilst the sun shines, in other words make the most of any situation whilst it lasts. Thus when we say we have had our busiest summer yet, we are certainly not complaining . It’s hard to believe that Paul ever had time to go out to work, as the two of us have been kept fully employed on the farm. Folks keep asking Paul how he is enjoying it…I only hear the answer he gives when I am standing next to him…but its always positive (in a Paul kind of way i.e it isn’t exactly positive more not negative).

Although, making hay whilst the sun shines is a bit of a sore subject here, as we have no hay. Yes. I know it has been the hottest summer since I was a toddler, but our grass wasn’t long enough before the heat wave, then post heatwave it forgot to stop raining. We have made haylage so not a massive problem, but some small bales would have been useful.

We spat-off the last of our females today and thankfully had 100% rejection. Three females were only on their ovulation spit-off so fingers crossed. We will test them next week, but we have finished our matings now so they will be left open if sitting. Thankfully Beck Brow Snooty Boots spat at her pregnancy spit-off. Boots has so far produced us champions every year; Jimmy Choos (at stud at Inca Alpaca), Fair Play (now owned Old Felton Alpacas) and Kiss Me Quick (National fawn female champ 2018 – staying at Beck Brow!). Her son this year is also top quality (Gee Whizz). Boots has been mated to Beck Brow On The Money (multi-championship winning brown male).

If my calculations are correct, we have mated 158 females this summer (this is a lot of time listening to orgling ringing in your ears). Forty eight of those belong to us, so we will be hoping for a similar drop to this year. We have at last got a female spitting off to Gilt Edge Kudos (sire: Ep Cambridge Invictus). Aged only 2 years it did take him a while to get the hang of staying on the job. A recording of First Edition orgling in his ear eventually did the trick.

We have sold a lot of alpacas over the summer, which means even with our 2018 births we will still be around the 100 alpacas on farm, possibly just under. We have released some top stock this year, not least of those being Beck Brow Ditto (sire: Beck Brow Explorer). Ditto is from one of our best female lines. She is full sister to: First Edition (multi-supreme champion and standing at stud at Beck Brow); Bottom’s Up (Multi-Supreme Champion); Bedazzle (multi-champion and dam of our best cria of 2018). This was a difficult decision as not only is she a champion herself, she is pregnant to Bozedown Blaze of Glory (National White Champion Male 2018). If Ditto doesn’t produce a top draw cria then I will throw in the towel! Congratulations to Angela and Stuart of Acton Hill Alpacas. Great purchase. 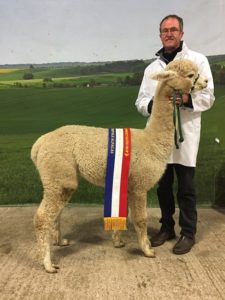 Talking about Blaze of Glory (c/o owned with Bozedown Alpacas); On Tuesday we decided, as the wind was down, we would get some photos of him in his sashes. It has to be said that he has a lot of broad ribbons to his name. If fact more awards than would fit easily on his back. Expecting him not to be too keen on all the sashes (as is the norm with ours) I put them on as quickly as possible, in no particular order, and started snapping. It soon became apparent that I could have taken some time, arranged his accolades in a much more organised way…for Blaze loved the posing. Standing stock still until WE decided we had had enough rather than he did…love everything about this boy.

Today was cria weigh-in day. Every Friday all of the babies get on the scales. We find this is the best way to pick up any problems quickly. Most commonly a little weight loss can be a sign of coccidiosis in the cria at few weeks old (we have treated only a few so far). All had good weight gains today. All the cria have now had their second Lambivac injection. We changed our regime this year and gave the first injection at 3 days (if well) and the second at 3-4 weeks. We had no issues with this at all. The weanlings will then be changed to Bravoxin 10 in December (2 doses).

On Monday we had the vet visit for some pre-movement Enferplex blood tests (on sold animals) and for some castrations. This was to be the first time we had used our newly purchased alpaca chute for the castrations and it worked a treat. The alpacas quickly relaxed once restrained, and it was over in no time. We also had two injection site abscess drained. We have rarely had any abscesses, but Glitterati had developed one on each shoulder at the site of Oxytetracyline injections. We are flushing these daily with Hibiscrub until completely clear, then we will leave to heal.

Regular readers (yes I know in order to have regular readers…you need to write a regular blog…at whichI fail), anyway some of you may recall that we purchased the Fawn Supreme Champion from the Australian Alpaca Spectacular in 2017. We had travelled to Australia with the intention of choosing a fawn stud male to join our herd. We had no thoughts of buying a female. That was until we saw the magnificent Forest Glen Champagne Moment.

On our wish list prior to our travels to Australia, had been a fawn Softfoot Maudib son, but upon arrival at the show we discovered that due to a run of sales, none were available. Thus we were delighted when were given the opportunity to send Champagne Moment to Softfoot to join their ET programme with Maudib. However as is the way with animals, things don’t always go to plan, and as is often the case with maidens, Champagne did not respond to the ET process. She has had a natural mating with Maudib and is now at 90 days gestation. As the owners of Softfoot are no longer going to be running an ET programme, we will now look to get her to the UK when the borders open. In the meantime we are very grateful to Ann, Bob and Natasha at Kurrawa Alpacas for agreeing to have her stay with them (along with our fawn male Ambersun Spinners Gold) until they can travel to New Zealand. Hopefully we will see them at some point in 2019 (post birthing) along with the lovely Gilt Edge Serenity (white female). 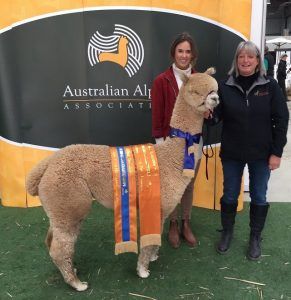 As per usual at this time of year, I spend too much time enjoying the cria. If take the camera I can pretend to pass this off as record keeping! Although it does appear that it is the same cria who get in the photos every time…we have some posers for sure…(please click on photos to enlarge)

Quietly cheeky is Beck Brow Mykonos, well he is sired by Goldmine so he was always going to have personality. His dam is the beautiful Bozedown Delphi (sire: Bozedown Achilles). As anticipated the combination of Goldmine and Achilles has resulted in a very fine, bright, soft handling fleece and a very pleasing head type. 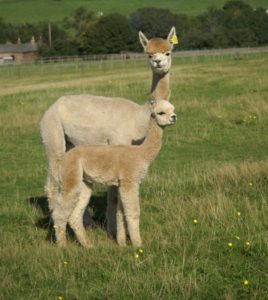 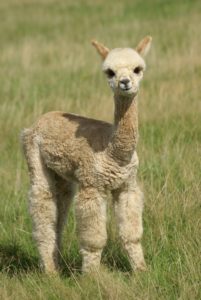 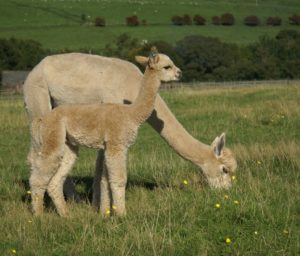 Beck Brow Explorer has been rather generous with giving us male progeny this year. Fortunately Beck Brow Love Struck aka Little E (dam; Furze Park Elvira) his only daughter of the year, is doing well after being so ill. She is now 20.5 kgs. Some way behind what she would have been at this stage but she is gaining well. 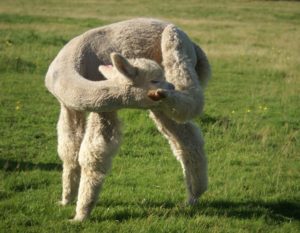 We do have a standout cria of the year (no point pretending we don’t have our special ones each year). Her name is Beck Brow High Jinx. Her dam is Beck Brow Bedazzle (sire; Beck Brow Explorer) sister to the aforementioned First Edition (Eddie), Bottom and Ditto. Her sire is Kurrawa Legend Crusader of Beck Brow. It is a struggle to get a photo which does her justice, hence of photo of her nursing where the density and organisation can be seen without opening the fleece. With ultra fineness too, we are looking forward to seeing her fleece grow back. 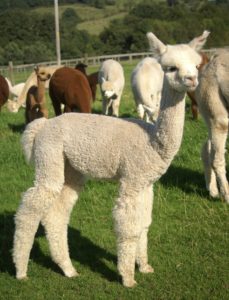 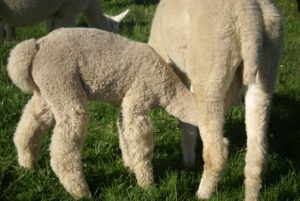 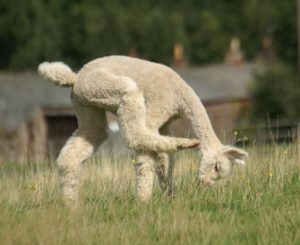 Timbertop Goldmine of Beck Brow has again produced some lovely fawn cria for us. The standout at the moment is Beck Brow Gee Whizz who is full sibling to Beck Brow Kiss Me Quick (National Fawn Champion Female 2018) 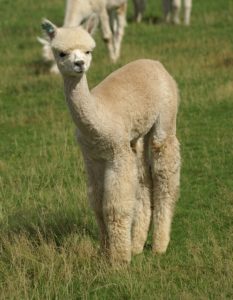 Also sired by Goldmine; The Stylist who is full sibling to multi-championship winning Beck Brow Vidal and So Sassy who is also closely related. Beck Brow Got The Moves (dam: Inca Garland) is our youngest cria. 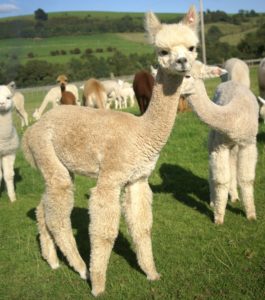 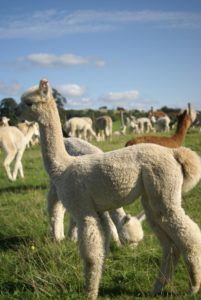 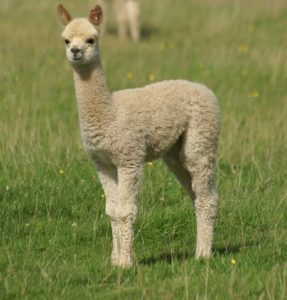 Beck Brow First Edition has produced some very stylish cria for us (but most appear to have missed the photo call!) 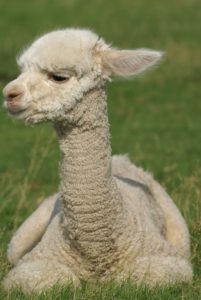 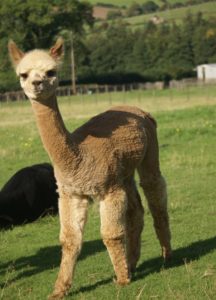 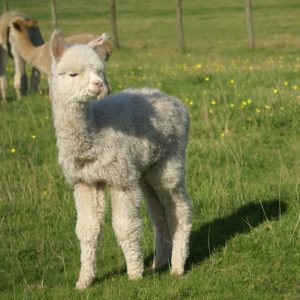 Some of the rest…. 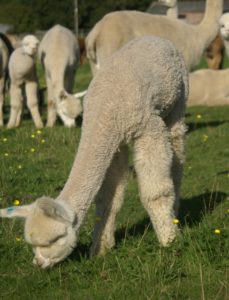 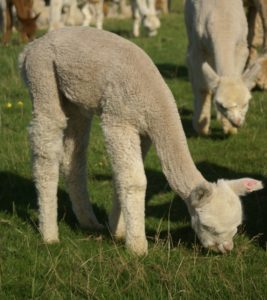 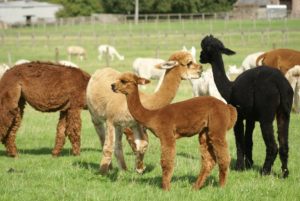 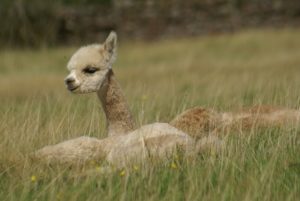 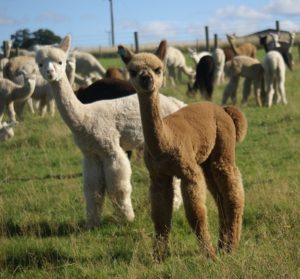 Beck Brow Spellbinder, whose dam is Bozedown Magic Charm is another male that we are keeping a close eye on. 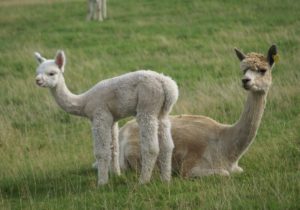 Not every mating decision works out just as we would wish (well it would be too easy if so!). Bozedown Celestrial is the dam of Beck Brow By Design, who we believe to be our best female born on farm. She is sired by Beck Brow Explorer. By Design has two full sisters who have both excelled in the show ring. So with such a good track record from that pairing I decide to change the winning formula (why oh why?). Celestrial was mated with Crusader and they have produced a female with an outstanding fleece, extremely dense, fine, organised throught out and…with coloured primaries. She is beige and has dark skin. We will have fun trying to get darker with the same fleece traits. However Celestrial is again pregnant to Explorer. 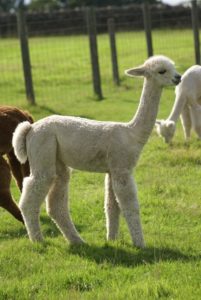 Someone who never seems to feature is our black female Beck Brow Best Shot. Her dam is Beck Brow Sunday Best a black champion winning female and her sire Ep Cambridge Gunsmith. 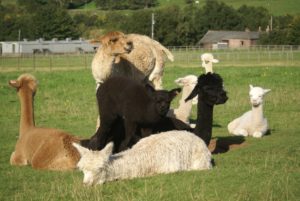 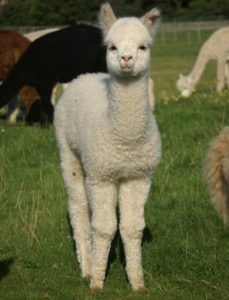 Beck Brow Hit for Six. A half brother to On the Money and Back of the Net, Hit for Six is sired by Samurai (a change from Goldmine). His dam is our best brown female Bozedown Campari. 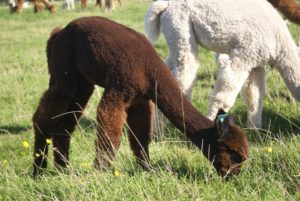 Last for this blog; Beck Brow Encore. Dam Morden Hall Honaria and sired by Explorer, Encore is a full brother to the aforementioned First Edition and siblings. 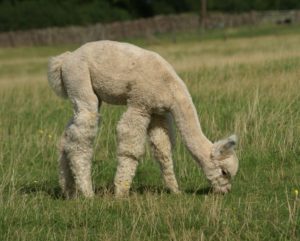 I am off out. I have a skip to fill. I am excited. It has taken a lot of persuasion to have this skip on the property. Okay you probably wouldn’t understand, but when you live with someone who likes filling sheds with things they may need sometime never…a skip is an achievement. Lets just see if I am allowed to fill it!