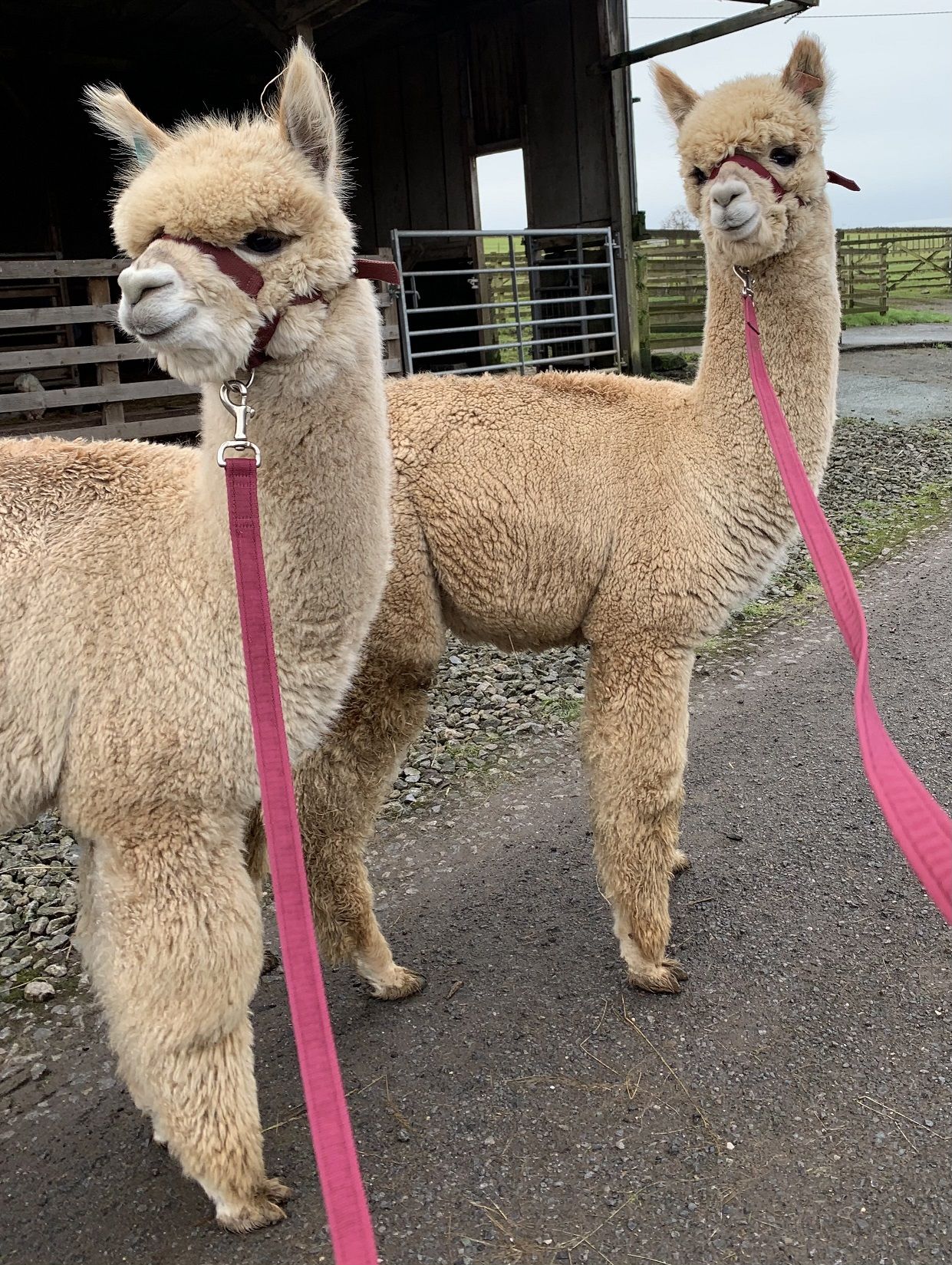 Far from true of course, because work on the farm has continued very much as normal. Snow and ice have kept us busy filling up haylage racks, mucking out and keeping water troughs accessible. I am not complaining as I do love the snow and a welcome relief from the mud. The weanlings are thriving on lots of  haylage and dried grass to make up for the lack of the real green stuff (click on photos to enlarge) 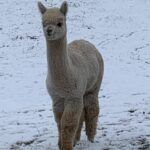 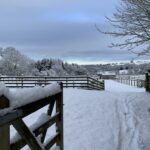 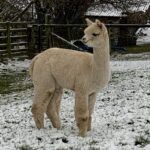 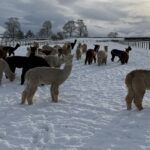 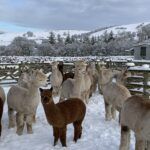 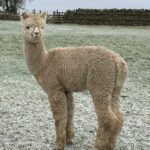 We have missed the halter shows, and whilst we supported the fleece shows, the halter shows are as much about meeting fellow breeders, seeing their alpacas, and socialising, as they are about winning ribbons. It will be an amazing BAS National Show in 2022 when we will see over 600 alpacas together again after two years without a National Show. At least this year we haven’t spent weeks trying to decide on our show team only for it to be cancelled. Limited by places available and too many candidates for our show team there are always a lot of decisions to be made. The ritual of the whiteboard, with possible candidates switching from ‘definite’ to ‘possible’ to ‘definite’, is going to be a miss this year! 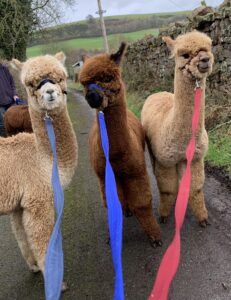 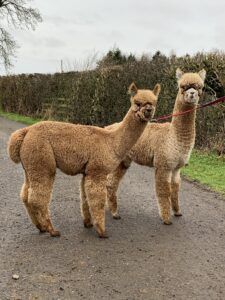 Thus, halter training is a bit slow with no March deadline to meet. All the weanlings (47 so far) have had their halters on and didn’t seem to mind at all, but today was the first time they have ventured out. Our excuse is that it has been either too slippy, too much snow, or its raining! I have a feeling they are going to an easy bunch this year, they are all very chilled. The Bozedown Blaze of Glory progeny are as sweet-natured as he is himself. They were, however, the cry babies at weaning, whereas, the Beck Brow Vidal progeny immediately took charge of the weanling group and never looked back. I love to see the personalities within the herd coming through. Just four left to wean at the end of the month. Based on personalities it was two Vidal progeny who were chosen to be first out along with two Blaze boys. They all behaved really well but Beck Brow Purrfectly Poised is going to be Chief of Training she would have been on the train to Carlise restrictions allowing. 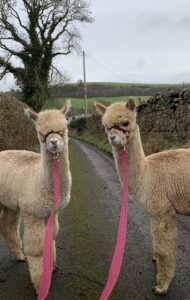 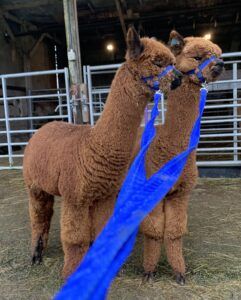 We still weigh the weanlings (and nursing cria) every week. My favourite day is currently Fridays. The only routine treatment we give is Baycox and oral Cydectin the day before weaning. Outside of this, we rely on weighing (or body score condition) to monitor, combined with our own testing of faecal egg counts. Last Friday was weighing and injecting AD&E and the week before was weighing and mineral drench. Looking forward to Fridays for excitement has a whole new meaning during lockdown!! 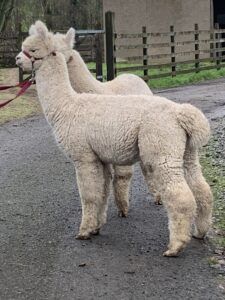 The herd are getting shorn on the 12th and 13th of April this year. Near enough a year to the day since the last annual shearing. Although it’s earlier than our pre covid years we decided last year that it was far better to be shorn pre-birthing. We have ordered in plenty of straw and have good accommodation to house all to acclimatise if the weather is cool. We also have coats of all sizes should they be required (none last year). Our first UK birth is due on the 15th of April but my bets are on the 1st of May (everyone hangs on forever early spring). Last night I totted up how many pregnant females we have on-farm. The answer was 70 until I realised 4 females hadn’t had their final spit-off nor been scanned. Scanned this morning and all 4 positive!. The planning has gone in for an additional barn so hopefully, that will be starting soon (ready for us to fill it!). We have 44 cria due in April and May so we are expecting a busy month or two. Our first birth of 2021 is actually due any day now…not in frosty Cumbria…but in Victoria, Australia. 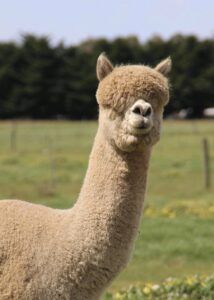 Sadly we will be having one less birth than expected. Despite having access to the paddocks at all times, our alpacas choose to spend most nights in the barn in winter (haylage being the main attraction). Thus, they are always in to greet us first thing. Paul immediately noticed that something was wrong and found one of the girls had aborted twins, prolapsed and lost some blood.  We immediately rang for the vet (who had difficulty gaining access to the farm due to ice but was heroic). We wrapped the prolapse in warm wet towels and plastic bags to keep it moist and warm and covered the female in warm coats on a straw bed. An epidural was given and the prolapse replaced. Unfortunately, we were too late and she went in to shock soon after and we lost her. Very sad start to the year and the first female we have lost to a birthing related incident.

One positive development due to Covid is the webinars that we have been able to access from both the UK and Australia. Amazing amount of information shared into the comfort of our own homes at minimal expense. We especially enjoyed a presentation by Kylie Munyard (from Curtin University in Australia) on alpaca genetic testing for colour. We have sent away 25 blood tests for analysis and have another 25 sample cards. We will see the results of the initial tests before choosing the next group. Whilst I generally favour the lighter shades, I really love the diversity of colour we now have in both our Suri and Huacaya herds. 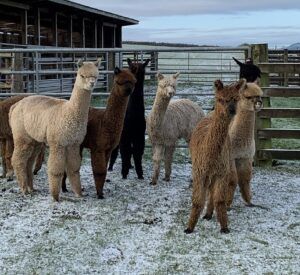 Beck Brow Alpacas across all the colours and both breeds 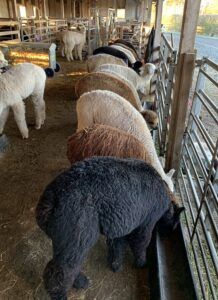 The Future of Beck Brow 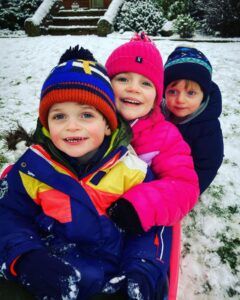 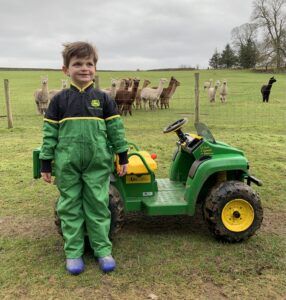 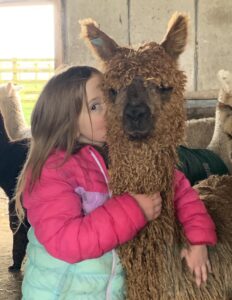 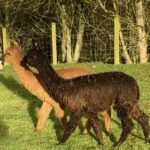 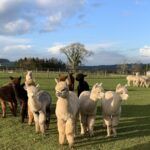 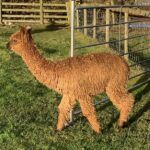 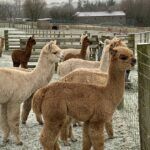 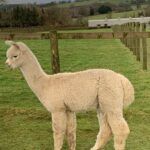 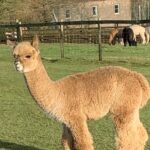 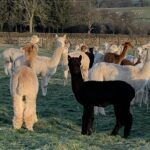 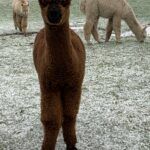 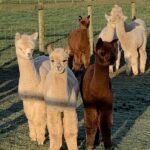 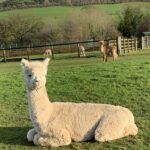 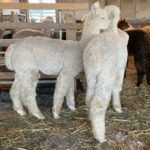 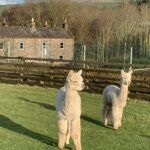