The Ups and Downs at Beck Brow Alpacas 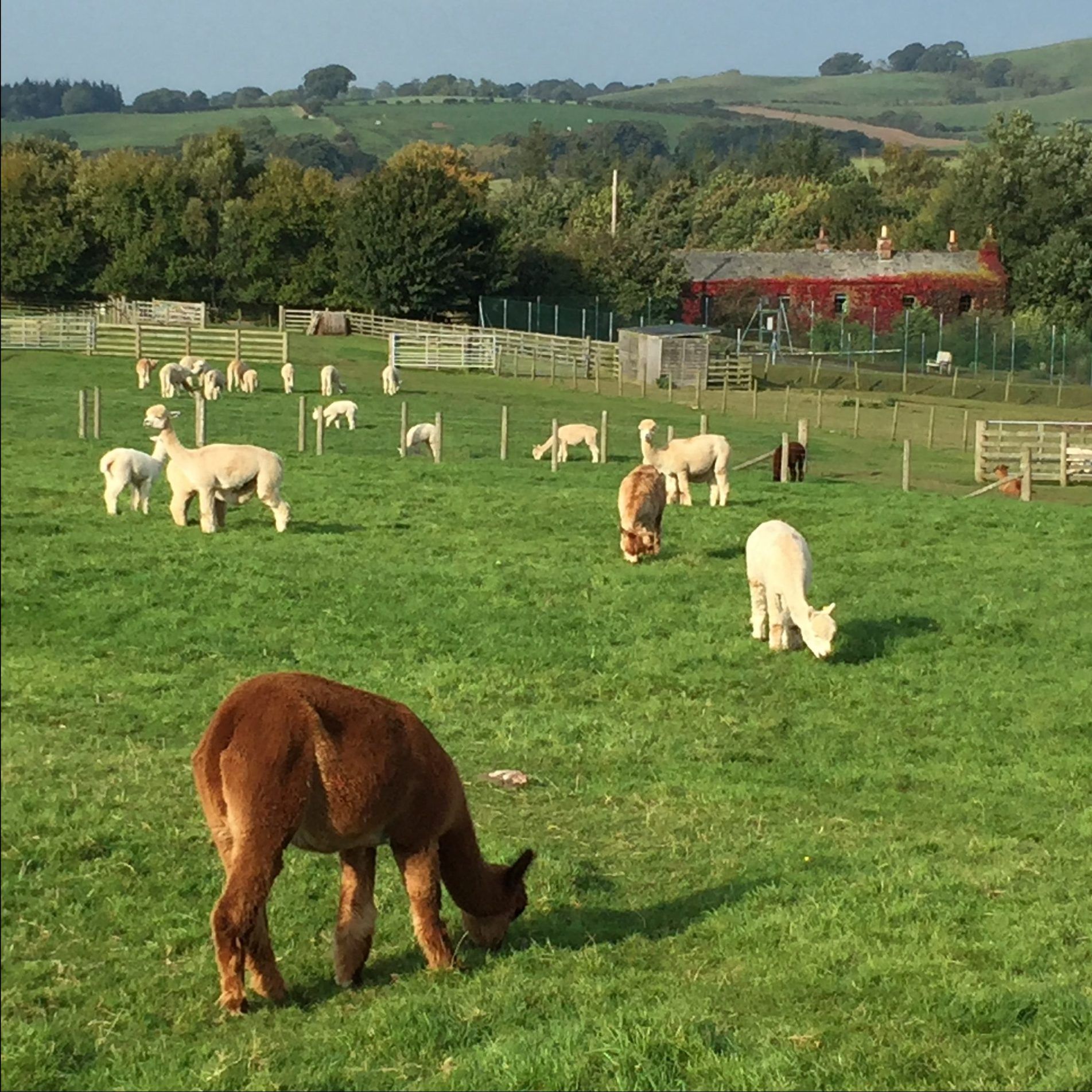 It has been a while since I have blogged…to be honest it’s because some of our news I would rather not share. However, that’s the trouble with blogging about your day to day life as an alpaca breeder; it’s isn’t always going to be good news. Blogging isn’t about only sharing news of our successes and achievements (that would be a news feature) it’s about being honest and transparent…sharing warts and all. Thus this blog is about the ups and the downs, the mundane and the fun…it is about a rather exhausting month since my last blog!

Following on from Westmorland Show, our next trip off the farm was to the Alpaca Classic, held this year at Yeat Wood Farm near Aylesbury (home of The Alpaca Stud and C-S Alpacas). This was the fifth Classic hosted by The Alpaca Stud and Bozedown Alpacas, and I am yet to miss one. This is of course because the education, food and wine is not to be missed…it has nothing to do with my addiction to buying alpacas at elite auctions…oh no…definitely not. And just to prove I really could sit on my hands, I decided not to get a bidder’s number…but there was a charity auction…so I needed a number…and it seems…. another alpaca. I am now the proud owner of Bozedown Delphi, my chosen lot from the Sweet Sixteen Breeders lot. Delphi is a yearling daughter of Bozedown Achilles, and carries a beautifully fine, dense, bright, light fawn fleece (MFD: 14.9, Sd 3.1, CV 20.7, CF 100% – Aug 16). I will next see her at Showtime before she comes to us next month.

I expect that there was lots of mundane in between, but my next trip down south was to scribe at the Heart of England Fleece Show, again held at C-S Alpacas…I was beginning to feel at home at their new farm. There is always lots to learn stewarding at the fleece show and I would have liked to have stayed to the end, but had to dash off having an early start the next day. So it was I arrived home at 10pm and went to bed ready for a 5am start the next day… to catch a plane to Amsterdam…for a well earned rest you you might be thinking….no to see another fleece and halter show!!

It was actually great fun having a long weekend in Amsterdam with Jean and Stuart (Velvet Hall Alpacas) and Angela and Ian (Hannahston Farm Alpacas). We did go to see the Benelux Alpaca Show and watch Cathy (Lloyd) judge the classes as well as catch up with other breeders, but managed to do some sight seeing as well…and maybe a little dining with refreshments! 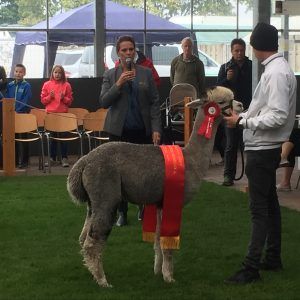 Cathy judging in the Netherlands.

As the results of the Heart of England  fleece show are kept under wraps until after the presentations, I had no idea how we had done with our fleeces until my return on the Tuesday…we were so pleased with our three Beck Brow Explorer progeny fleeces, who were awarded Champion White Fleece, Reserve Champion White Fleece, Reserve Champion Supreme, Best of British, Judge’s Choice, Best Crimp Style, Best Brightness. Congratulations also to Lusi Alpacas who were awarded Champion Black Fleece for Beck Brow Prime Suspect.

Okay so that’s a lot of the up covered…unfortunately the down completely floored us…whilst I was in Amsterdam, Paul had noticed that Moloko (our newly purchased beautiful brown Suri – dam to Angie’s Tribute) had a slight tremor. He took her temperature which was slightly low. She was still eating but he felt something wasn’t right. The vet came and took bloods. He wasn’t overly concerned but gave I.V thiamine, antibiotics, flunixin and she was drenched with Cydectin and Vecoxan. The vet was called back a few hours later when she had a sudden deterioration…and I am devastated to say we lost her soon after. She has had a post mortem (pm) and the only thing found were lesions in the brain. No infective cause and all other organs and results normal. We are assuming that her loss was due to thiamine deficiency, but because she had been treated, the reading wasn’t abnormal. I am still in shock that she went so quickly, the pm showed freshly eaten grass and hay in her stomach, so few signs to know that something was so seriously wrong…

Of course whilst it was so sad for us… we knew it was going to be even worse if we were to lose her cria (Angie’s Tribute) as well…here was the legacy of the lovely Moloko. We tried bottle feeding, but she was adamant she wasn’t having any of it. Fortunately she was already eating hard feed…so the search was on for some milk pellets….we rang everywhere…everyone was on the case, but outside of the foaling season…there was none to be found. Thus an order was placed whilst we considered what to do in the mean time. Eager not to tube feed if not absolutely necessary, we sprinkled a small amount of milk powder in with her Hembra and Cria feed and she took this well. She now tucks into her milk pellets with gusto (which arrived 2 days later) and has gained 2 kgs over the 20 days since she lost her mum. She is such a sweetheart, she knows to come into her private dining area, and made me chuckle the other day when I realised she didn’t look up when I called her name…but came running when I called ” Come on my lovely little Suri”.

We are lucky that we have Moloko’s dam, daughter, grand dam and aunty here at Beck Brow, not only because we have not lost her line, but also because…the main reason that Tribute has thrived is, I believe down to her grand dam, Mojito. Mojito has taken over the rule of her dam and barely leaves her side. It is so touching to see, and so reassuring to know, that she is being cared for by her family. Yes…alpacas never cease to touch and amaze. 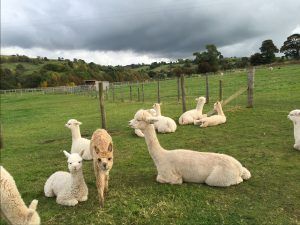 Back to the mundane…we have weighed 160 alpacas over the past two days…actually I really enjoy it as it’s such a great opportunity to get hands on…to evaluate fleeces but more importantly to evaluate the health of the herd. One of the reasons for the mass weigh-in was to get accurate weights for dosing oral Cydectin. We have not routinely wormed for a few years now and rely on faecal egg counts (FECs) and then treat accordingly. However, as we have had a number of positive results (no Haemonchus thankfully but other round worms and some coccidia in cria results) we decided to dose the whole herd. The cria have all had Tolracol (this is the same drug as in Baycox but is £100 per litre cheaper – provided by our vet) to cover coccidia. It is a good feeling to know the whole herd is covered.

It has been a busy time on the  husbandry front with all our pregnant females having received a selenium, cobalt and B12 drench. I realised rather too late, that a number of our females who were mated later in the year, were not getting pregnant first time (and their history told me this wasn’t their norm). Unfortunately we have ran out of time, so these girls have been left open, but we want to retain the pregnancies we have. We know our land is low in selenium and have always drenched, but this year I assumed that the JG Animal Health drench and double rations of Hembra and Cria/ Camelibra would be sufficient…of course this hasn’t the same levels… had I done the maths! We have taken some blood work and are awaiting further results. On top of this the whole herd has had their vitamins AD&E ready for winter. We have certainly had our hands on the alpacas often enough lately. They are such a calm herd (now that the liveries are settled in to Beck Brow chilled out ways!) it is always a joy.

We have had a busy time with visitors and enquiries for alpacas. Nine of this year’s cria at foot are now reserved, but I have not been persuaded to part with any more adult females. I have too many breeding decisions I need to see through. We have spat-off all the Beck Brow females today (yes busy day). We have 34 spitting-off. Twelve are not pregnant; these are evenly split between those who have dropped their pregnancy, those we left open because they were late birthers, and those who were given just one mating due to the time of year. Unfortunately 9 out of the 12 are females who normally produce our show team. However, we have some lovely young maidens spitting-off including for four championship winning females (including a Supreme and Best Female in Show winner) as well as Stardust (a Spartacus daughter whose dam is a Firedragon daughter). Lots to look forward to including our first Suri births on farm…actually thinking about it we will have 36 spitting-off when our new girls arrive…more another time.

In amongst all the hard work I have been having fun…a weekend with the girls staying over on the farm…then a trip to the cinema to see The Girl On The Train…wouldn’t like you to think it’s all work and no play!

It was high drama this morning, when we went out to do the morning feed…all of the alpacas were spooked and outside of the barn (they are usually all in waiting for breakfast)…Paul was first to see the problem in the barn…Reno with a bag full of snakes 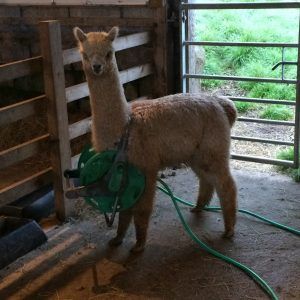 Beck Brow Reno with the garden hose around his neck.

Poor Reno was rather shocked (the hose has been there for at least four years – but there is always something new!) and relived for us to save him from his escapade. 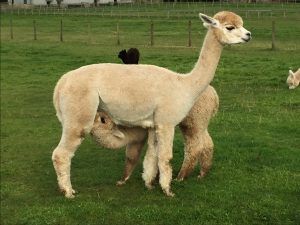 Reno and Anything Goes reunited.

Finally a photo of Beck Brow Ditto. Her dam Honario has provided us with four stunning Explorer progeny over the past four years, sadly she is one of the females we have left open as Ditto was born late August. 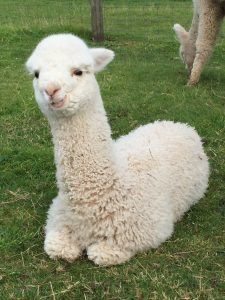 Our next trip out will be on Saturday when we are off to the Yorkshire Alpaca Group Show in Harrogate. I am really looking forward to it…a new venue for the show….and a new show team for us (with some we have never shown before).

Now to input 160 weights into the data base…