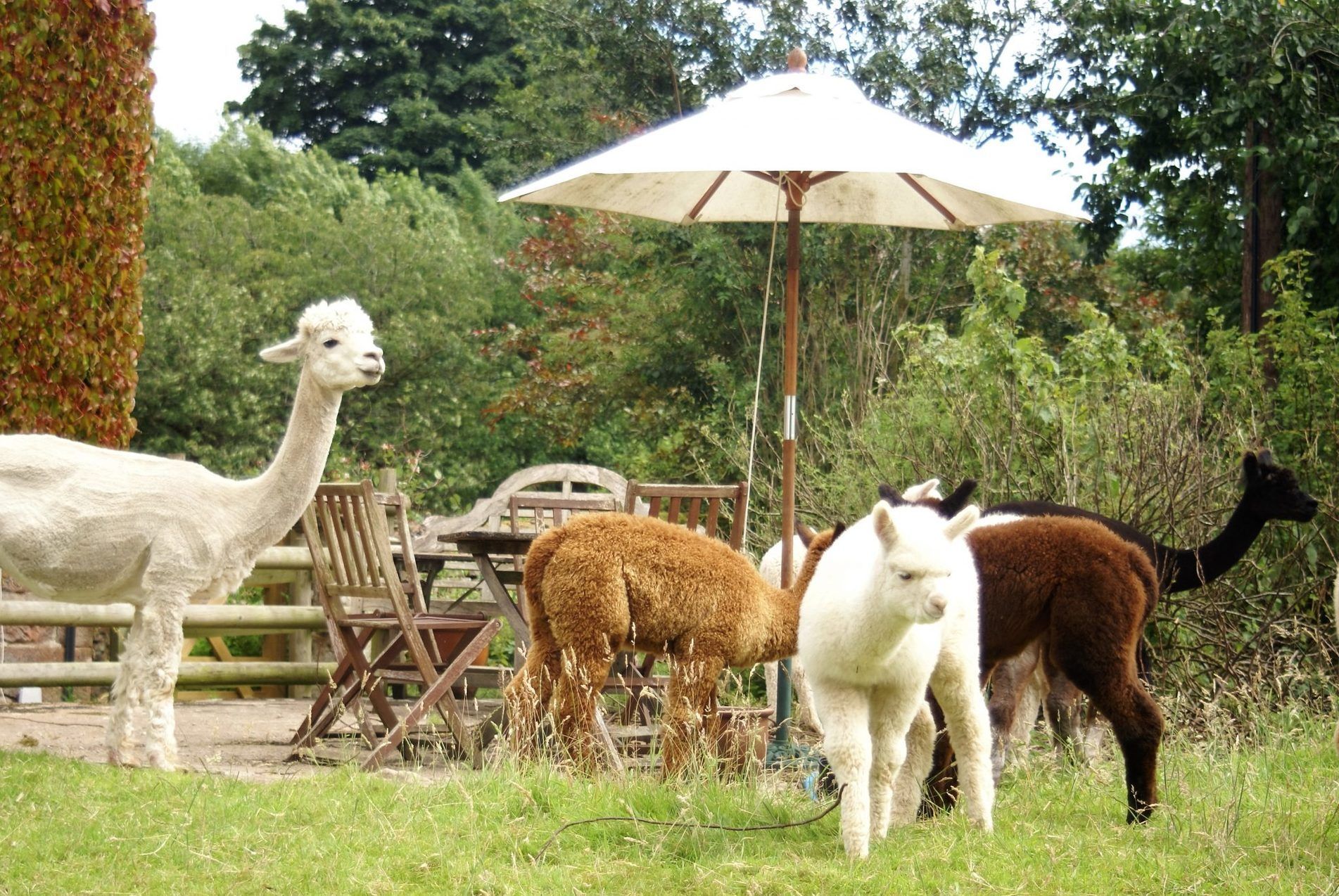 The first tandem birthing went very well, ending with an absolute dead heat. They were so close on the ground I only had to turn around to spray each of their cords. Hoity Toity produced a beige Goldmine daughter and Adelle (white) produced a mutli-coloured Black Sabbath daughter (it was always a gamble on the colour). High Time and Dolly Mix were up and away, and are thriving.

The tandem birthing this week was a little less straight forward. Fallowfield Octavia and Beck Brow Bunny Girl (both carrying Explorer cria) began to push standing right beside each other. Octavia reached the head and both legs stage first but decided to have quite a long pause. When Bunny wasn’t making much progress I checked and found a leg bent back at the knuckle. Easily resolved, she went on to birth first with Octavia immediately behind. Two Explorer daughters…the first of the year…Yipee… A beautiful white from Octavia and a surprise light fawn from Bunny.

However, it soon became apparent that Bunny was not quite as impressed as I was. I kept putting her cria in front of her, but she wasn’t interested. At least Octavia’s cria was very quick to her feet and up drinking, so I only had one to worry about (or so I thought). On the farm on my own, I was just hoping that I could temp Bunny in to the barn with food (luckily she is greedy if not maternal). I managed to pen Bunny and cria, Octavia and her cria, and Adelle and Dolly Mix in together. I gave Bunny sepia (homeopathic remedy) and the cria some bovine colostrum (to get her going as she was low in energy which didn’t help matters) and hoped for some bonding. Bunny was chattering to her cria a little but didn’t like her too close. However the cria seemed just as disinterested in her, as she was in it. Bunny was calm, if aloof, and allowed us to hold her cria under her, but the cria just wouldn’t suckle from her. In fact the cria seemed to be wary of her and gave her a wide berth.

Once I had given enough colostrum to give some cover for passive transfer, I left them overnight. When the cria wouldn’t take her morning bottle I was hopeful. We always say if a cria has drank happily from a bottle and then stops, it is usually because they have latched on to their dam. However closer inspection made this seem unlikely, and a soapy enema produced the meconium, and the appetite for her bottle returned.

The long and the short of it is, whilst we could try to persevere in persuading Bunny to accept her cria (and I think she would eventually – she is calm but not especially interested) the cria has rejected her. Bunny will allow the cria under her when held but the cria doesn’t drink, whatever we try. I know the advice would be to keep the cria on the hungry side so that she looks for milk, but we have, and she has gained no weight just maintained, but is still not interested. Once left Bunny shows no interest at all and visa versa. So we have named her Bunty and bottle fed she will be. Such a shame as topping up is one thing…not having a dam to watch out for you from birth is tough. They are back penned in their little group again today. 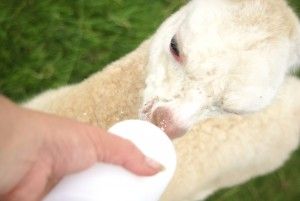 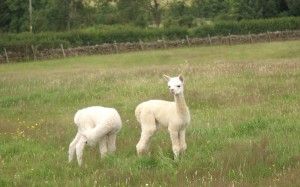 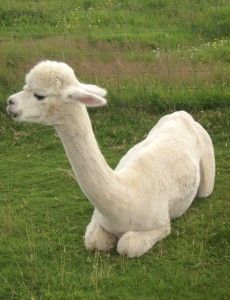 We have only had this situation once before, where the dam and cria have failed to bond despite penning and the use of sepia. This was with Fine Romance (Roma) and Foxy Sox (2012). In this case we rather blamed Galaxy (Roma’s dam) for interfering, for as soon as Roma birthed Galaxy appeared to be calling her away from the cria. Whatever was going on it certainly didn’t help. Interestingly the same happened again with Bunny; Courtesse her dam, was calling to Bunny as soon as she birthed. At first we thought that she was advising Bunny, but her calling confused the cria and who initially looked to Courtesse when she called.

Whilst I had been thinking that Octavia’s cria was at least problem free, that obviously wasn’t the case. We are very careful to only weigh newborn cria once they have dried (it is surprising how much heavier they are when still wet) so we knew that a loss of 500gs in less that 24 hours was very significant. When examined it looked like the cria hadn’t drank from two quarters where the milk was quite difficult to express. Jitterbug (as we have called her) has now had a plasma transfusion and maintained her weight yesterday. Today she had gained 200gs and is doing fine. 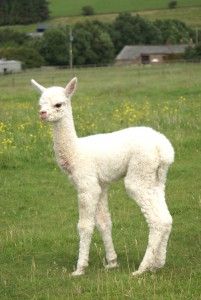 So we have two lovely Explorer daughters to help even up the female deficit and fifteen births now to go. Bozedown Magic Charm has produced a lovely beige female (full brother to Match Point) a strong girl with an extremely dense fleece. With Magic as a prompt we have named her Just Like That (youngsters Google Tommy Cooper!!) 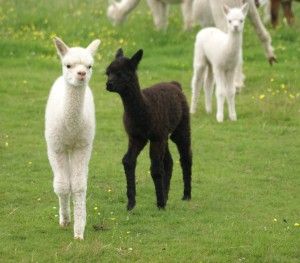 Inca Havannah has also produced a lovely fawn female. A lighter version of her daughter Tutu. Keeping with the theme we have called her Ra Ra…oh how I loved my ra ra skirts in the eighties! 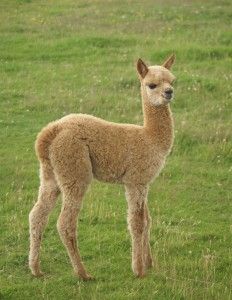 Ep Cambridge Courtesse gave us another male, but a very nice Explorer son. We have named him Jakoti. 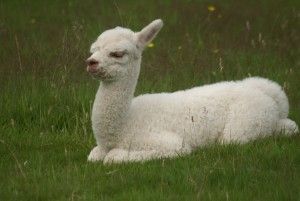 We have had some mixed weather this week. Rather too hot on Tuesday, I spent much of my time (whilst not looking after Bunny and Bunty) hosing down the heavily pregnant females who were over heating. I moved one of the groups next to the house where they had more access to trees for shade. Some of the cria also took advantage of the garden furniture which is now in the paddock. The female in the photo is Ep Cambridge Aria (dam of Valley Alpacas The Diplomat) who is looking rather serene. The following day we had a monsoon of a storm, and the umbrella did well to stay upright! 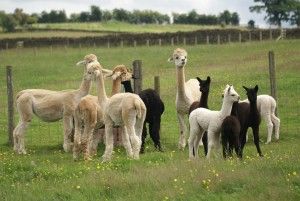 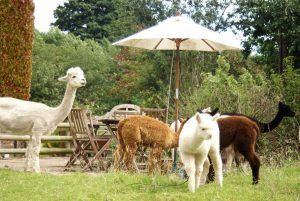 We have used Crovect against the flies for the first time this year. Only on a couple of females who have wounds and thus were particularly bothered by them. I am not sure how successful it has been. Partially I would say, but maybe my administration could have been better (the blue dye is a give away to how evenly distributed it has been)

Finally some photos (not great quality but cute) 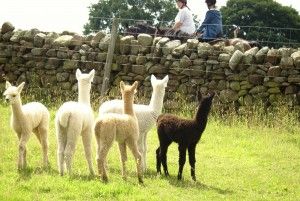 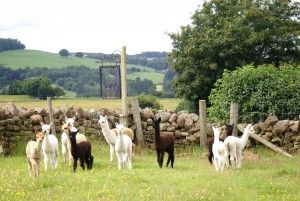