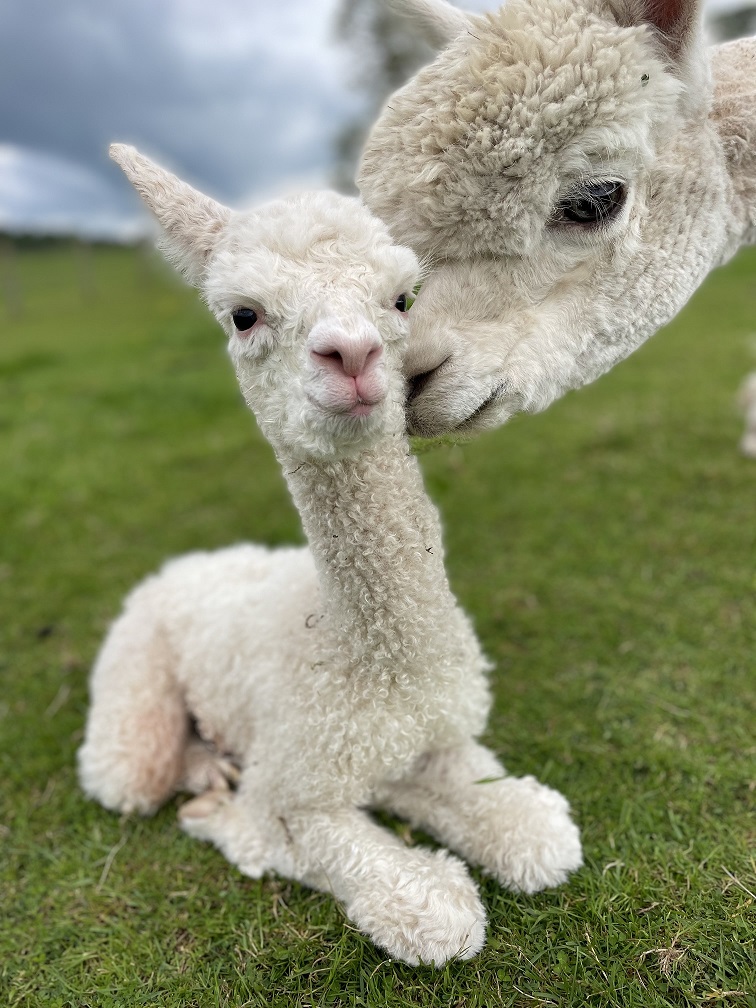 That’s birthing over for 2022. With our first cria born on the 19th of April and the last on the 29th July, it’s been a lovely summer on the farm. Our decision to remove any females from our breeding programme who did not birth easily, or produce enough milk, is now paying dividends with us having to provide minimal intervention. Maidens are given a second chance, but by removing the dams that had issues we are finding that the next generation is also mainly trouble-free. 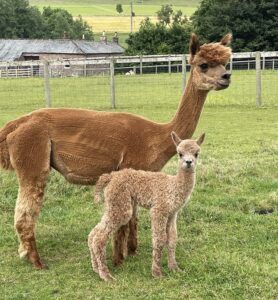 I would also add here that the sire has a large part to play in the ease of the birthing season. We have been particularly impressed at the Limestone Red progeny who start looking for milk the minute they hit the ground even if this means reaching the milk bar on their knees!

We did have two stillborn at full term. Sadly with the numbers we have this is going to happen sometimes. One of the females went on to prolapse (the placenta had not detached from the wall of the uterus which was obviously the cause of the cria death). The vet was quickly called and the situation was corrected after an epidural was given. The dam was administered antibiotics and an anti-inflammatory injection and is doing fine.

We haven’t had the need to use plasma this year and whilst we have our own supply we rarely have the need to use it. Thankfully we have had no sick cria and we cover any risk of failure of passive transfer by using bovine colostrum (cria need to get adequate colostrum within the first 6 hours to produce enough immunoglobulins to resist infection).  When any cria looks like they may not be quick to drink or when maiden mums are taking a while to get the hang of things we get the bovine colostrum out of the freezer. Often it is just one feed to get them going. If not we aim for around 300mls in the first 6 hours depending on the size of the cria. Obviously, the colostrum has to come from a disease-free farm. 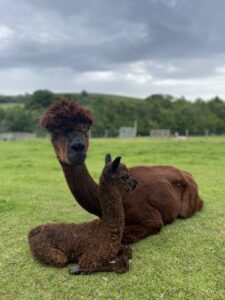 The only negative we have found with using bovine colostrum is that the crias can get constipated. Generally, a soapy enema does the trick but occasionally we have had to give Microlax. Certainly, we find it much less invasive than a plasma transfusion and much cheaper too.

Much time is spent deciding on pairings for the breeding season. I start in the new year (something to keep me entertained in the depth of winter) with lists of females and potential suitors. I usually ignore the number of names on the list, but Paul is good at counting, and even I had to agree that 97 was far too many. At this point, Paul got excited that we would need to make some sales, but I have decided to retire some of the older females instead! However, Aria has managed to get herself in the mating pen again aged 16 years old (probably because she sits by the pen gate from day 10 post birthing and she  is fit as a fiddle)

We don’t usually breed our young females until the summer that they will be two years of age. Whilst well grown enough to breed the year before, we believe that they have plenty of years ahead to have cria and prefer that they are mentally mature. That said, last year I was persuaded by a young female to mate her at 14 months of age (in 14 years of breeding we have done this only a handful of times). She had been sitting for months so I decided that she knew best. She did give birth perfectly well but would have allowed anyone to steal her colostrum at the expense of her own cria had I not intervened. We also missed having Standing Ovation in our 2022 show team as we don’t show females when pregnant. So no young females were given the option this year. We will let them grow up first! 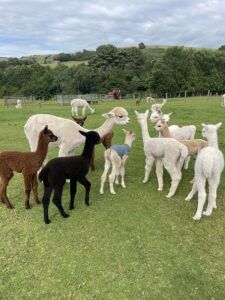 We still have more females spitting off than this time last year but a lot can happen over winter. The joy of breeding for so many years is seeing the generational gain from your decisions made over time. With 17 different males used (only one outside mating) 2023 should be another exciting year where we can carefully assess the results of our home-bred pairings.

We have been very fortunate to be one of the few counties to have had normal levels of rainfall this summer. We actually got more hay/haylage per acre than we have ever had. We also got it in a timely manner when the grass was at its best. Thankfully we haven’t had to feed extra hay and the grass has remained green and lush.

Phase two of the barn building has been completed. The two large barns are home to the pregnant females and also the cria. Work has commenced on phase three opposite. This will be two buildings, one a classroom(storage at other times) and the other a double height store for feed/fleeces and medical supplies. 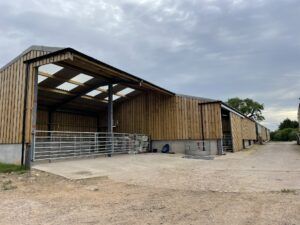 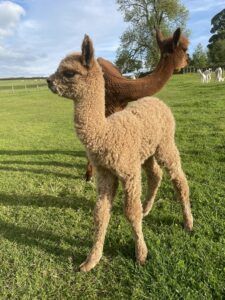 In April, after much careful consideration, Craig (our son-in-law) decided to give up his well-paid job and company car in exchange for a shovel and an electric bike. This has certainly made things much easier and more pleasurable when we can all get a break from time to time. Hopefully, Paul and I will get some long-haul travel booked for 2023 (after all that was our hobby before we went to Peru!!).

Paul and I will be doing some short-haul travel this autumn. We are away three weekends in a row in October when I am judging in Norway, Germany and Italy. Despite all being return visits I have to drag Paul along to ensure I catch the right plane/train/taxi. I really have no sense of direction, before the invention of the Sat Nav I couldn’t leave Cumbria on my own! 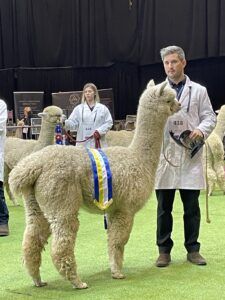 Our first cria of the year was an exciting prospect (Beck Brow Fashionista x Bozedown Blaze of Glory) and didn’t disappoint although he did cause a touch of drama. We knew Fashionista was, in what we thought were the very early stages of labour and were anticipating a cria in the morning. However, she decided that 9 pm was a good idea. The cria was soon up on his feet and looking for milk. With a dry night forecast we donned him in a coat, to ward off any chill in the night air, and happily went to bed. 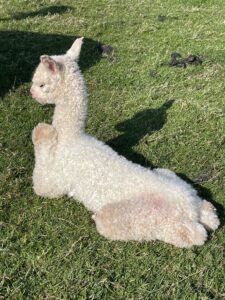 When Paul went out at 5am Fashionista was in the new barn but there was no cria. Dressed in my dressing gown and slippers I went out expecting to find the cria behind a hay rack. An hour had passed and we could find no sign of him. We had walked the paddock and searched the barn over and over. We convinced ourselves that a fox had taken him but then couldn’t quite believe that there would be no sign at all of either cria or coat. Fashionista was still calmly chewing the cud. Checking on the CCTV Fashionista was seen walking towards the barn at 4.30 with her cria.

Thankfully we didn’t give up looking as we found him down in the foundations of the new barn. It was hard to believe how he had slid through the smallest of gaps and how he had survived such a big drop, but there he was cushed and unscathed. He earned the name Indiana Jones with such early adventures. 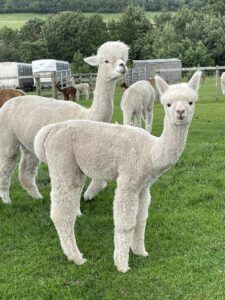 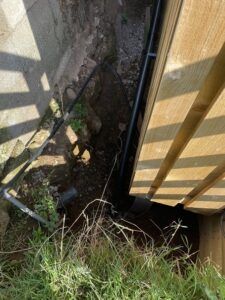 The foundations of the shed 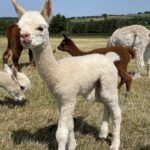 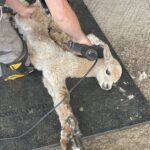 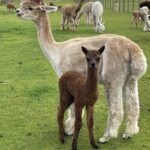 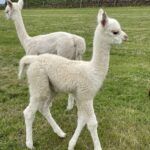 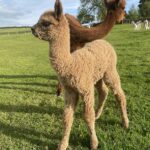 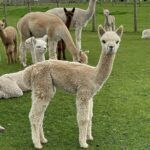 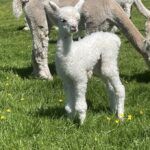 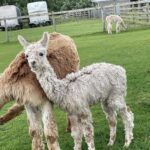 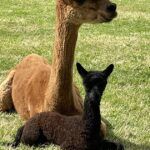 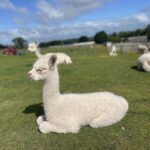 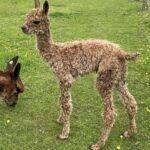 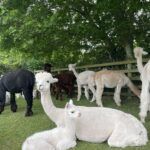 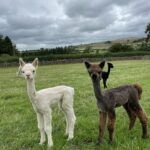 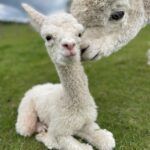 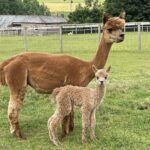 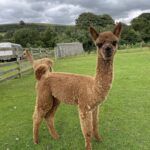 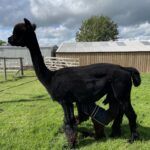