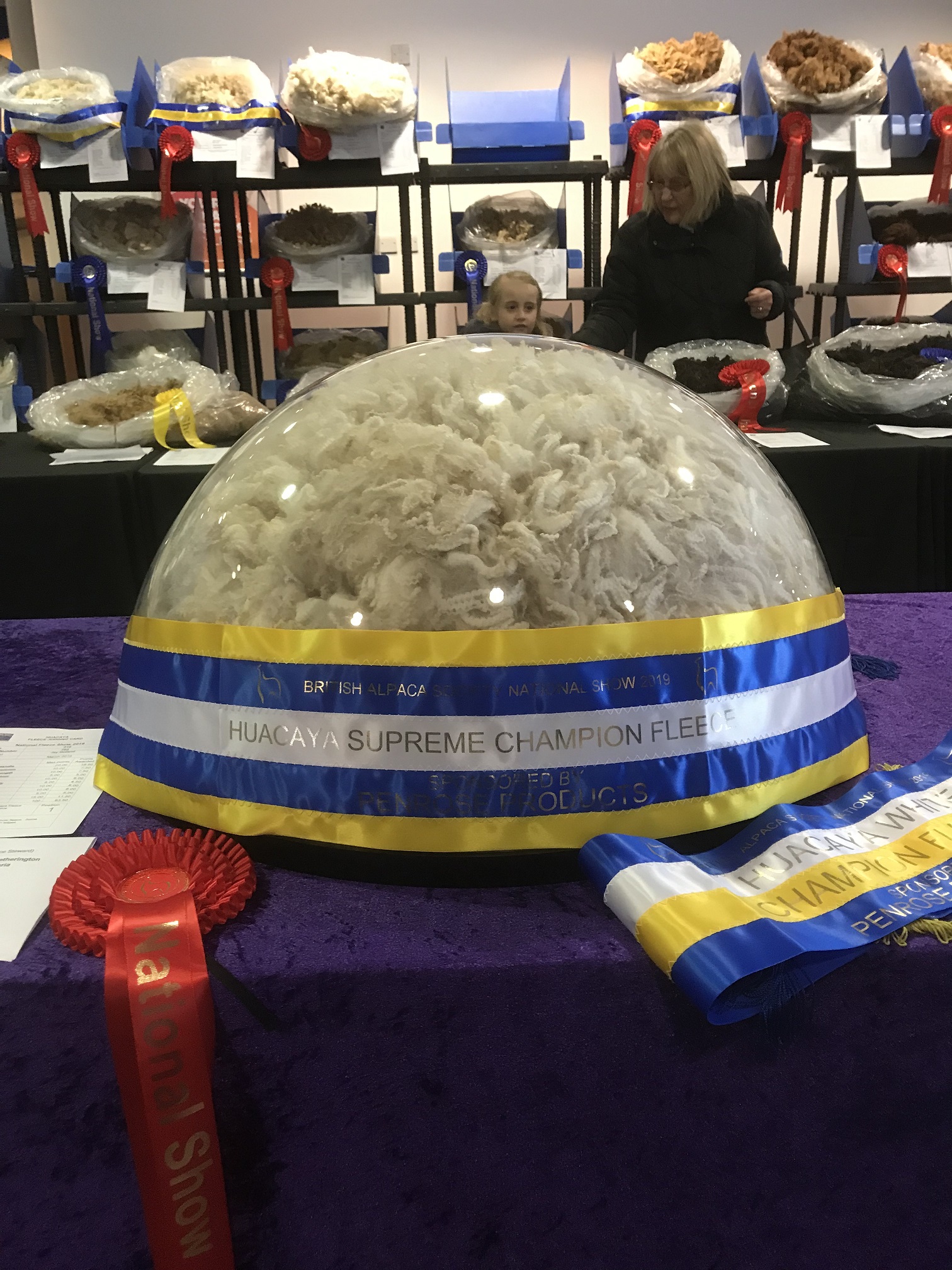 It has been a year since Paul took the plunge and decided to take the job title of Full-time Alpaca Farmer (although he claims not to have read the job description outlining the alpaca poop duties). This means that alpaca husbandry tasks are now undertaken during the week and in daytime hours. The adult alpacas are all weighed monthly. The youngsters more frequently. Everything is up to date and the alpacas are looking great. This also means fewer daytime hours to write blogs…but five months is seriously slacking!

We have attended three shows so far this season, and have been fortunate enough to win a Supreme Championship (in different categories) at each of the shows. The first of the year was the British Alpaca Society National Show where Beck Brow By-Design was awarded Supreme Champion Huacaya Fleece. She then continued her successful show career by taking the Best of British and Supreme Champion Huacaya Halter, at the Scottish Alpaca Championships. By Design is to be mated with the equally highly decorated Bozedown Blaze of Glory, once we have them shorn, this really should be a match made in heaven. 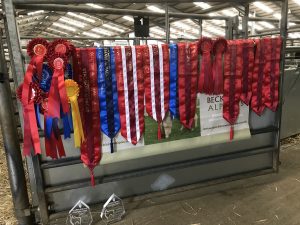 Our third Supreme Championship was awarded at the NWAG Alpaca Championships where Beck Brow Falco took the Suri Halter Supreme. 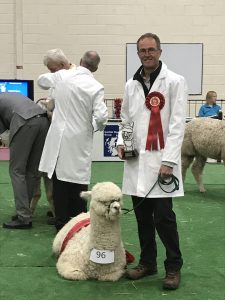 Our first birth of the year was on the 29th of April. Galaxy had been mated early last year, as we wanted to use Waradene St Patrick before he went to his new home at Pottery Alpacas. St Patrick has produced some of our ‘never to be sold’ females and we were hoping for another addition to that group. We have had great success when fawn St Patrick daughters are crossed with Viracocha Black Sabbath, who have then produced championship-winning black progeny. Thus a fawn daughter with black toe nails (yes this is the key) was on the wish list. Thankfully Galaxy is always very obliging and we got just what we asked for, hence the name Beck Brow As Requested.

Second to give birth was Beck Brow Cat’s Pyjamas (sire Waradene St Patrick) who is the dam of Beck Brow Bees Knees (now owned Amberly Alpacas). Cats was mated with Timbertop CT Goldmine of Beck Brow (now owned Acton Hill Alpacas) in the hope of a repeat performance, and it seems she had also read the memo, as she gave us a full brother. He looks every bit as smart as Bees Knees at the same age, so much so we have named him Beck Brow Looks The Business. He is such a mischief, he might have been more aptly named as Monkey Business. Cats. a daughter of Lady Gaga and of similar temperament, just watches serenely as he jumps on the other females, then scarpers before he gets spat at.

Then, unfortunately, we had a run of bad luck. On Saturday Inca Garland delivered her fifth female in a row, but two months too early. Garland was on my ‘excited about this one’ list as she was pregnant to Beck Brow On The Money. A perfect little dark brown female, just born far too soon. Still feeling disappointed and upset for Garland, I find Delphi at 6 o clock the next morning next to a beautiful light brown female, who had obviously been born in the middle of the night and failed to survive (330-days gestation). Poor Delphi was distraught. This was another female I was excited about. But far worse than the loss of a cria for us, is seeing how the mums grieve.  Surely things had to get better. But no. The next morning, first thing, we look out of the window to see a white female birthing, too far away to see who it is.  The initial excitement of seeing that it was Bozedown Celestrial (who was going to produce us a full sibling for Beck Brow By Design) soon changed to despair as we saw that the cria was being born breech. A handsome white male was delivered stillborn having obviously snapped the cord in the womb. Poor Celestrial she so loves being a mother, and usually feeds two cria given the opportunity. We had had a great start to the year, with all our females, thought to be pregnant, coming through winter still looking swell, sadly the loses seem so much worse when they have carried cria to full term.  At least the females don’t have to wait long before they can be re-mated, which does always help with their grief (knowing another cria is on its way).

As you can imagine, we were very pleased to get back to a stress-free birth on Tuesday, when Wellow Qtaz delivered our first female Suri to be born on the farm. A lovely lustrous light brown (might be dark fawn) girl, who was up on her feet within half an hour. 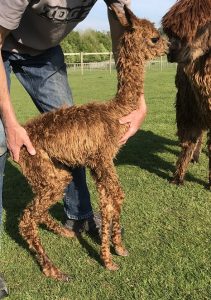 We are looking forward to our first Bozedown Blaze of Glory progeny to be born. Beck Brow Bedazzle (sire: Beck Brow Explorer) is due first in a couple of weeks time (or whenever she decides). Cambridge Scarborough (black) will hopefully produce us our first Beck Brow On The Money cria any time soon. So plenty to look forward to including a first cria for Beck Brow Kiss Me Quick (another one of my favourites on the ‘never for sale’ list).

I cannot help myself. The only person who believes me when I say “that’s it, no more” is me, and I am beginning to doubt there’s any truth in it. I got tempted, yet again, by looking in the Houghton Hall Alpacas’ pen at the National Show. Once the hurdle was opened for me to step inside, I was doomed. So it is, two lovely little junior females will be joining us soon. Houghton Lucky Spirit is a delightful light brown female (sire: Wyterrica Palladium of Houghton) and Houghton Suzie Q a super mid fawn (sire: Houghton Noah). Both these females were purchased with Ambersun Spinners Gold in mind (our fawn stud currently awaiting export from Australia). The girls are being Enferplex tested on Monday and will come to one of our isolation paddocks once we have clear results.

Our isolation paddocks are being kept busy, with our lovely Bozedown females still in isolation for a while longer. The girls were pre-movement Enferplex tested and kept in isolation. Moved within three days of clear results. Then they have been isolated here and post movement tested. Always reassuring to follow best practice at both vendor and recepient farms. Of course, ensuring new additions do not bring any internal or external parasites into the herd is equally important. 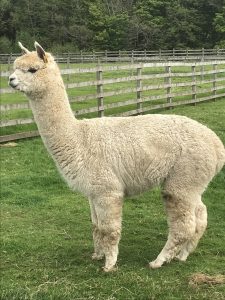 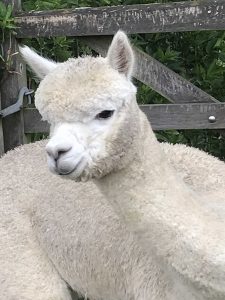 We have such a lovely group of weanlings this year. We have just recently split the boys from the girls (Gee Whizz and Catapult had taken rather a shine to Got The Moves and a threesome was doing nothing for the state of her fleece – never mind her tolerance of the pesky boys). Seven of the young females have been sold and have now left. It’s tough letting the babies go, but I know we will see them grow on at lovely new homes. We are waiting to see the second fleeces on a lot of the males, many of whom look very promising. It takes time but great to see our breeding decisions and investment in new genetics paying dividends. 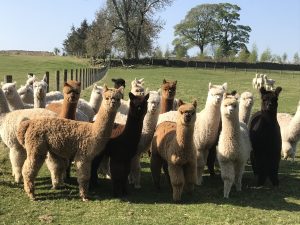 We are taking a small team of juniors to Northumberland Show (and a couple of adult Suris). We will be shearing 100 alpacas on the Sunday before (with the shearer returning for those going to the show) so I expect to be creaking around the tent. Thankfully we have plenty of helpers this year for shearing and we will have Robyn and Ben handling for us at the show. This will be the last show for us as exhibitors until Westmorland in September. I have also had the honour of judging the Heart of England Fiesta and Cornwall Camelid Society Show. No more shows until August, when I will be travelling to Sweden to judge fleece.