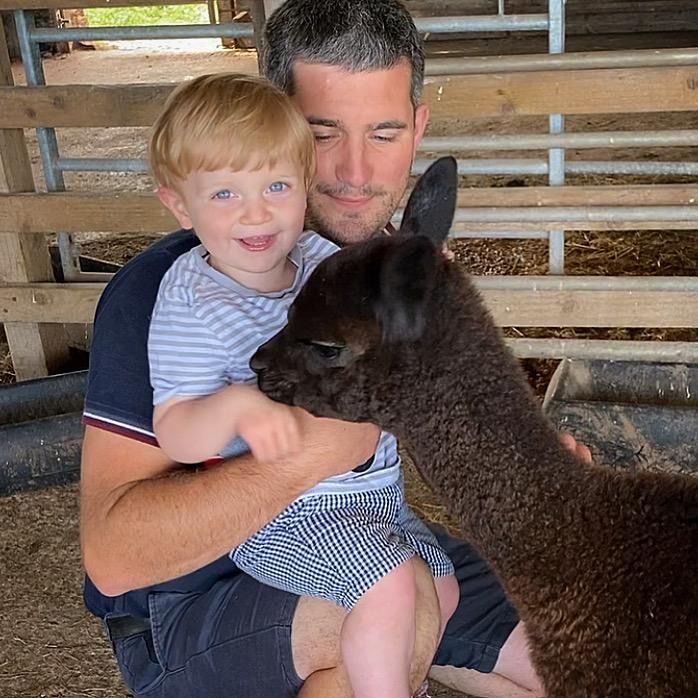 Pandemic or no pandemic, our summer on the alpaca farm has pretty much carried on as normal. We make the occasional trip out to M&S for food (which takes a bit longer) and the wine deliveries keep on arriving (if a bit later) and the rain keeps on pouring (despite the fair forecast). Whilst a northern lass through and through, even I despair at how often we have poor weather at the point the grass has grown long enough to make hay. Yet again our hay has become haylage, as the promised dry weather turned to heavy showers. We can only watch on Facebook as those in the South load their trailer, and console ourselves with the amount of grass that we have in the fields. We have one more paddock still to cut, so a chance of some small bales yet. We do feed a lot of haylage during winter but a couple of hundred small bales are useful to have. Of course, as always, our summer is non-stop birthing and stud services.

In my last blog, I wrote of the hope that the tally of boys to girls might even out. At that point, we still had 11 females left to birth, but with the last 6 cria being male and only 3 births to go, we can declare a resounding win for the boys. Score 27 to the boys; 16 to the girls at this point. The agisted alpacas have fared better with an even split. Might it be possible for the last 3 females to produce girls? Bozedown Campari has produced 5 males in a row, surely time for a change. Although as the dam of Beck Brow On The Money we are not complaining. 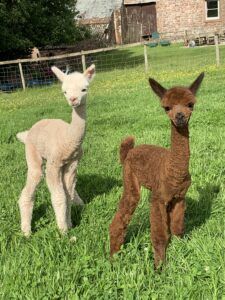 Double trouble on the poo pile 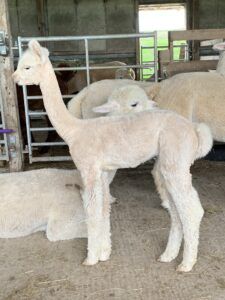 We decided to cria shear again this year. All 44 Huacaya cria were shorn (not Suri). Only one little wobble from a dam whose cria looked brown before shearing and was actually black, but she did, with persistence from the cria, eventually let her drink. The mum had a couple of drenches of sepia (homoeopathic medication) which did seem to help calm her down. The cria was 5 weeks old. We sheared all those born, with the youngest aged only 7 days.  At 2 months old, some of the cria had quite a lot of good fleece removed, but trying to keep unshorn cria fleece free of vegetable matter is something that we find impossible.

Quite a bit of our time is taken up weighing cria. We weigh daily for 2 weeks then (if all is well) we weigh every third day. They will eventually go on to twice weekly and then weekly at a few months of age. We use the spring balance scales with a sling up until 16 kgs then we move on to the platform scales. They soon learn to run through the pen with the scales, especially if there is some food in the troughs on the other side! 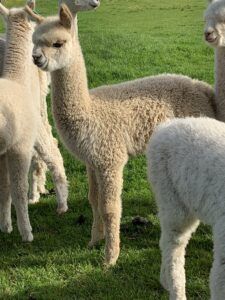 We don’t routinely worm or treat for coccidiosis (other than at weaning) so any weight loss needs to be picked up. We have had a couple this year who have needed Baycox after Paul has run faecal egg counts.  Other concerns would be an indication of a possible infection and also reduced intake. A reasonably common cause for a cria to stop feeding is due to constipation (we find that this is especially so if the cria has been fed bovine colostrum). It is usually spotted by observing the cria straining at the poo pile but can get missed. Our protocol for the treatment of constipation is to start with the basics first. In 99% of cases a warm soapy enema does the trick (we use baby shampoo and 30 mls of water via a short tube – hold down the tail for a minute ). We have had approximately 350 cria born on-farm and have only had to use Microlax on three occasions when the soapy enema did not produce a result, This is our second level of treatment. Only once have we had to step that up by adding oral medication. Initially with Lactulose (with no effect) moving on to liquid paraffin as a last resort.

As with many alpaca breeders at this time of the year, the sound of mating alpacas ogling in our ears is a daily event. Paul, the engineer, is tasked with ensuring the mating procedure is in order and goes around with dirty knees muttering something about “what a way to make a living” on a regular basis. We have 66 alpacas spitting off on-farm. So a busy May/June for us again next year. We are finishing our own matings soon, just one or two as they reach 21-days postpartum. Mating earlier works well for us, as we now have one or two herds booked in for drive-by matings every day (different males none work every day). Of course, there is always one female who doesn’t get pregnant as planned. Inevitably it is always one of our top producers. Last year Snooty Boots was left over to start spring birthing rather than autumn. She successfully became pregnant but has dropped the pregnancy. Re-mated today she is nearly back where she was last year, and we are running out of time!

We are often asked at what age do we take females out of our breeding programme? The answer is we let them decide (as long as they are fit and healthy). If they come and sit next to the mating pen whilst a mating is taking place, then they are allowed some romancing. If they don’t come near (and they normally would) we take it that they are calling it a day and they have earned their pension (paid in Camelibra). Aria who is 14 years old sits to be re-mated within days of birthing. We make her wait but never get quite to 21 days. Aria’s cria are always some of the fastest-growing, she births easily and is totally unfazed by anything. Ep Cambridge Aria is the dam of Valley Alpacas The Diplomat a high performing stud male at Furze Park Alpacas. 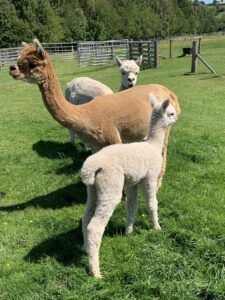 Whilst we do not use age as a criteria to retire females, we do look at other factors. A few years ago I mentioned to Mary-Jo Smith at Bozedown Alpacas that the females we purchased from her always birthed easily and had an abundance of milk (they are the ones who started the trend of allowing any cria to feed from them). Her reply was ” that’s because if females are problem birthers or poor milk producers they are no longer bred” It’s not an easy decision to remove a quality female from the herd but we have followed this example. Is it fair to keep breeding from a female when her cria need to be topped up with bottles every year? or one where the vet has to be called out at birthing each season? We haven’t re-mated our female with the vaginal prolapse. It is likely this will happen again. Fortunately, she hasn’t come near the mating pen, which makes it easier.

The cancellation of the halter shows in the spring felt like the end of the world as we knew it at the time. Then we put things into perspective. We were well and had lots to look forward too. There were also positives as we went into the birthing season full of energy (the shows are great but definitely tiring). We will be going to the National Show next year with both juniors and intermediates who have never been shown. We won’t have seen the competition out there. It’s going to be great. Hopefully, we will have a vaccine by next March, social distancing will be over, and we can throw away the dreadful masks!

In the meantime, we will be entering some fleece shows. Our first was the Three Counties which was extremely well supported with 150 entries. Fleece shows provide such valuable feedback so it was good to see breeders taking the opportunity to have their fleeces judges. We had an incredible show, entering 3 fleeces and being awarded five sashes and a Supreme Champion Huacaya Sheild as well as Judge’s Choice Suri.

Apologies about the lack of post cria shearing photos – it keeps raining!! 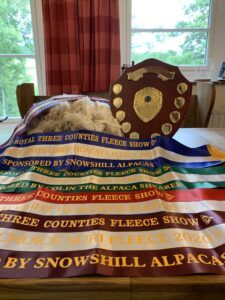