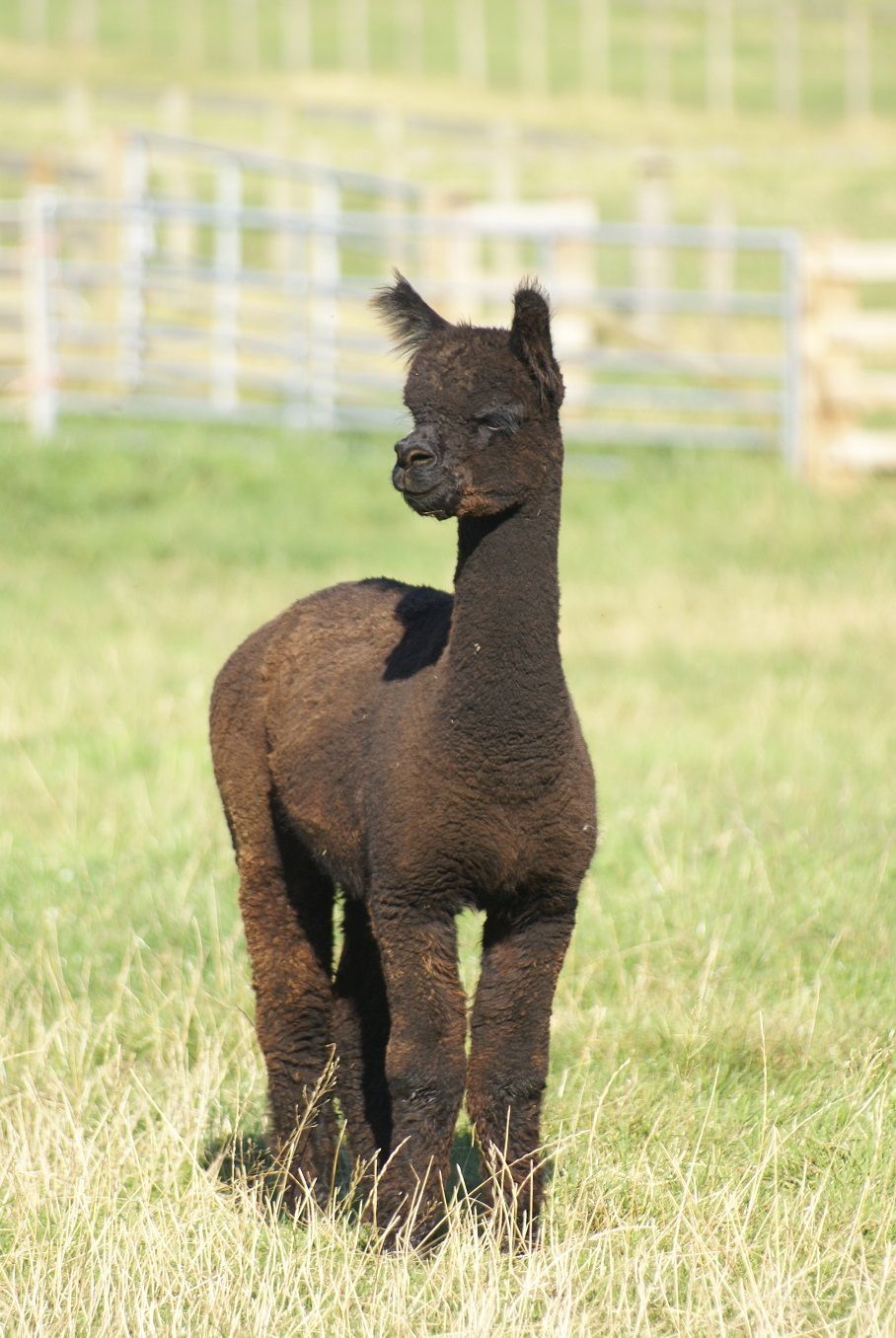 After months of watching the maternity paddock…I am now free to leave the farm without looking for either a farm sitter or alternatively having to shop at break neck speed in order to be home within the hour! It has taken a bit of getting used to. I kept clock watching at first (after all it has been six months) but I am now rather enjoying hitting the high street (was definitely cheaper stuck on farm!) and even managed a manicure!

We have had 11 girls and 10 boys born belonging to us (many more from 5 herds on livery here). We have had some very nice cria born in a lovely array of colours. Our best year to date for us. Next year if all of the females on farm hold their pregnancies (unlikely) we have the potential for 67 births (40 ours). Looks like a busy one next year!

One of our most exciting cria of the year is Beck Brow On The Money. Thus it is not good news that he has injured his right hind leg. I noticed it at the beginning of the week and hoped it was just superficial, however it doesn’t really seem to be improving as I had hoped. I think we will have the vet check him out (I am rather worried that it is looking like a ligament injury) 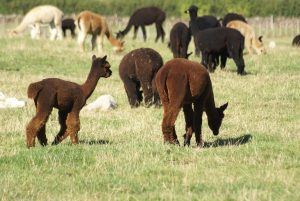 I had a lovely couple of days up in Scotland at the weekend. The Scottish Smallholders and Growers put on a show each year in Lanark, and this year they wanted to involve some alpacas. And so it was that I was invited to judge a fun show (obviously not BAS) in order to put something on for the public to watch. It was very well attended with 35 fleece and approximately the same in halter. It was great to meet so many enthusiastic breeders and the show was very well organised. The Scottish Alpaca Group will be holding a BAS halter show as the same place next April, with Matthew Lloyd as the BAS judge.

The event coincided with the Heart of England Fleece Show, which meant that I was unable to attend. We had entered four white fleece, two junior and two intermediate. I wasn’t expecting a great deal, as I had weighed them and knew we were short. However having read the article on density written by Dr Stephen Mulholland (Alpaca World Autumn 2014) I was reassured that our fleeces were dense but they are ultra fine and thus will be considerably lighter than a fleece even a couple of microns coarser. So with fleeces of 15 and 16 micron it is really difficult to get the full weight points (also Trendsetter had a couple of crows nests removed from her fleece). However, I thought it would be good to have them assessed and use this as feedback for our breeding programme.

We are focused on breeding for uniformity and low primary fibre diameter along with good density. We didn’t aim for ultra fine fleeces but this has naturally come on the back of this. Hence we were truly delighted with our score cards. Below is Beck Brow Trendsetter’s fleece and score card. She tested 15.8 microns (AAFT -but this is very difficult by eye) and had a SD of 3.3. The exciting results are uniformity of micron at 9.0 and lack of guard hair at 9.5. These are very good. Beck Brow First Edition (who got first in the Intermediate White) also got 9 for uniformity and 9 for lack of guard hair (his second fleece is 16.8 and SD 3.3). Our four fleeces took 1st and 3rd intermediate white and 2nd and 4th junior white (I haven’t seen the score card for the other fleece) 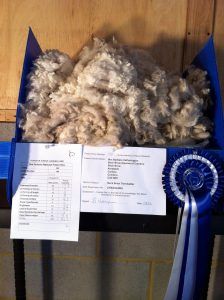 Trendsetter (sire: Beck Brow Explorer) will be going to both the YAG show and Showtime at the end of the month. I have varied the teams between the shows to give some different boys and girls an outing, however Beck Brow Prime Suspect (top) has also been entered in both shows.

We will be doing our last spit-offs this weekend. Every one had their vitamin and mineral drench yesterday and a few toe nails got done. Also on the list for the weekend is microchipping of the cria. Not my favourite job, so I am glad to say that Paul is taking on the task of insertion whilst I do the cuddle hold. It sort of feels like we are on top of things after an incredibly busy summer.

As we have had another lovely sunny day, I will finish with the photos taken today: 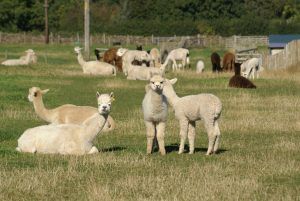 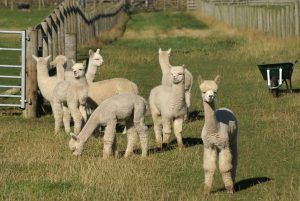 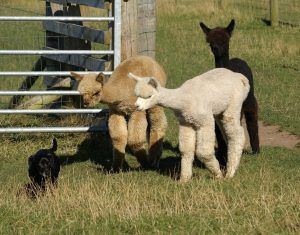 Velvet with Golden Sunset (Goldmine) and The Strategist (Explorer) 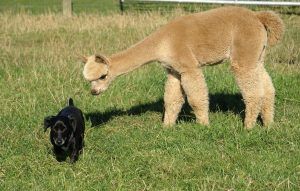 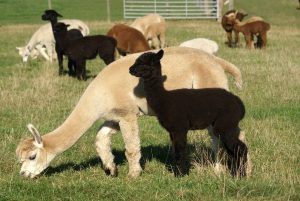 Snooty Boots with Fair Play (Black Sabbath) every day I have to rescue Fair Play as Snooty has left her in a different paddock. 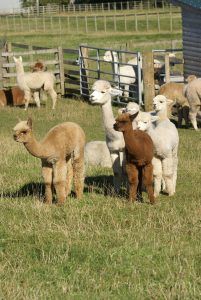 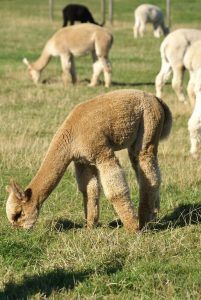 Golden Sunet (Goldmine) a beautiful colour from a white female (we have repeated that one!) 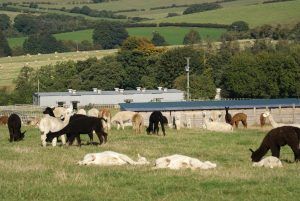 And some photos that don’t involve cria… 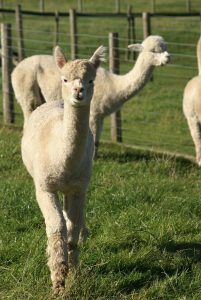 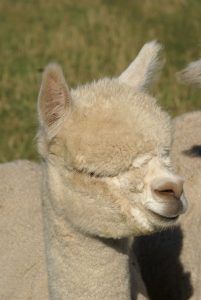 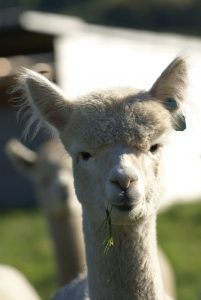 Stardust (sire: Spartacus) has grown into a beautiful female since here premature birth in quarantine in New Zealand 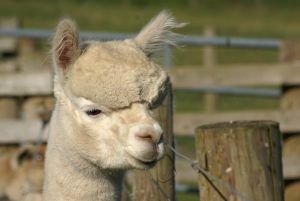 Hallelujah (adult female) is the double of her sire Explorer. She is pregnant to Goldmine but will be mated to our new boy Kurrawa Legend’s Crusader next year. 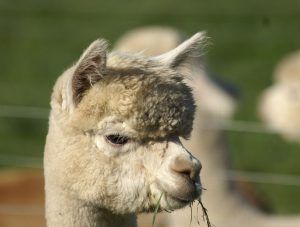