Does anyone know the time???? 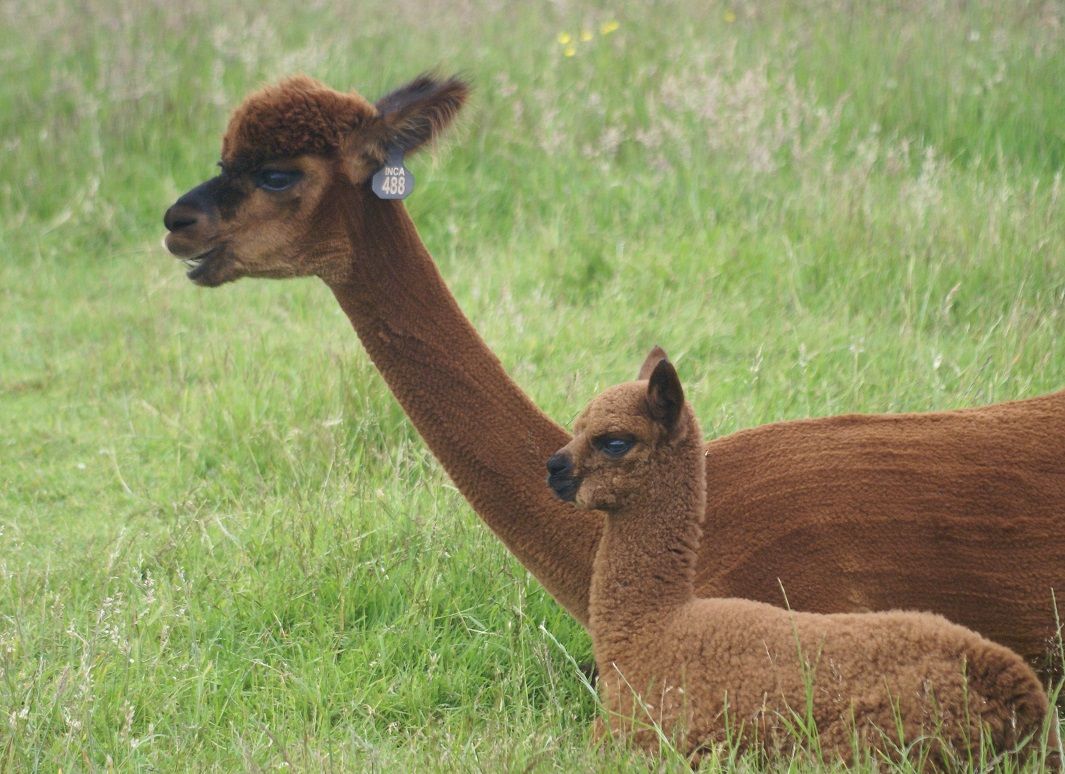 Let’s start with last Wednesday, when Inca Havannah was showing all the signs of wishing to unpack her cria. Straight out after breakfast, chattering away to her unborn cria, and heading for the sandpit (this is the favourite place for the first stages of labour). By 11 am I had decided that something just wasn’t going as it should. A quick call and Amanda and Graham (Florens) came over to hold her whilst I investigated.

Well I would have investigated if I could have got my hand in. She was so tight. We tried lubrication and gentle stretching but to no avail. A nose was evident…but there was no way the cria was coming out. The vet was called and a C-section anticipated. In the meantime the contractions were coming more frequently and Havannah was pushing hard.

The vet arrived and decisions were needed…and quickly…in the end it was agreed that an episiotomy should be tried as the first intervention. With local injected, the cut was made, and the problem was found to be the the vaginal sphincter had not opened, rather than ring womb (cervix) as expected. To cut to the chase…after much manoeuvring…out she came…a beautiful brown female, who was full of beans and quickly on to her feet.

Despite being quite torn inside, as well as cut, Havannah loved her cria immediately and was kissing her whilst the vet was stitching her up. Lots of pain relief, a week of broad spectrum antibiotics, and care of the external wound, and all seems well. We have named the cria Tutu. She is such a pretty girl who has has gained weight at a great rate, and as a bonus has a gorgeous fleece too.

On Thursday we caught up on some of our spit -offs (own and agisted). Ep Cambridge Gunsmith now has seven females rejecting him at pregnancy spit-offs. Then on Friday the boys had five females arrive for romance.

Saturday I took Dixie Chick, After Eight and Seventh Heaven to Skelton Agricultural show. Dixie, especially, was an absolute star. I don’t think we have ever had such crowds before. Plenty of scarves sold despite the warm weather, and lots of animal enquires.

Sunday was another busy day with a visit from a lovely couple (holidaying in the Lakes, but based in the South) who are new to alpacas. They have females who will be having a date with Explorer later this month and were interested in seeing his progeny. This coincided with the collection of four pet boys we had recently sold. The boys have gone to Scotland to act as guards to chickens and geese as well as being family pets. This also coincided with a drive by mating…so our visitors got to see Explorer in action!

On Monday the boys had three females visit on drive-by. After that I thought I might just have a quiet evening. Paul was away…a bottle of white and some M&S treats were on the agenda…Just the evening feeds to do…and a cria being born at 5.30pm!!!! Pandora produced a beautiful mid fawn daughter (sire; Waradene St Patrick).

Pandora’s adult daughter (Kingwell Athena) was especially interested in the newborn…so much so she decided now was the time to go in to labour. I am not quite sure how it came as a shock to her…but it did…she turned saw the head and legs and freaked out. Eventually birthing and running for the hills, leaving the cria on the ground. A beige female born at 8pm!!

A call to Robyn for assistance and all the girls from the due paddock were brought in to the barn. By this time the heavens had opened. Pandora’s cria hadn’t drank and was looking in corners, rather than under mum. She was given vitamin B1, some cows colostrum and penned with mum, and also with Athena and her cria.

Athena did decide she rather liked her daughter after a while, but wasn’t keen to feed her. So her cria was also given cows colostrum. Pandora’s cria (who has been named Slinkee Minx) soon got the hang of nursing and Athena’s was given adequate colostrum to cover passive transfer needs, then left to look for mum. I got my glass of wine, smoked salmon, calamari, marinated artichokes etc…at 11pm!

By morning all was resolved; Athena was feeding her cria (although I did have to keep reuniting them for the first few hours, as Athena wandered off and forgot about her) 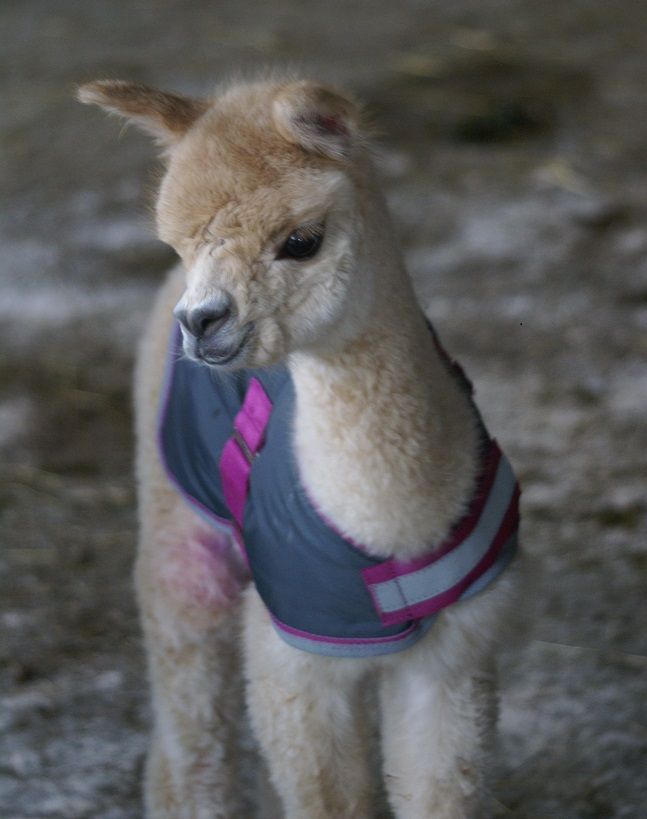 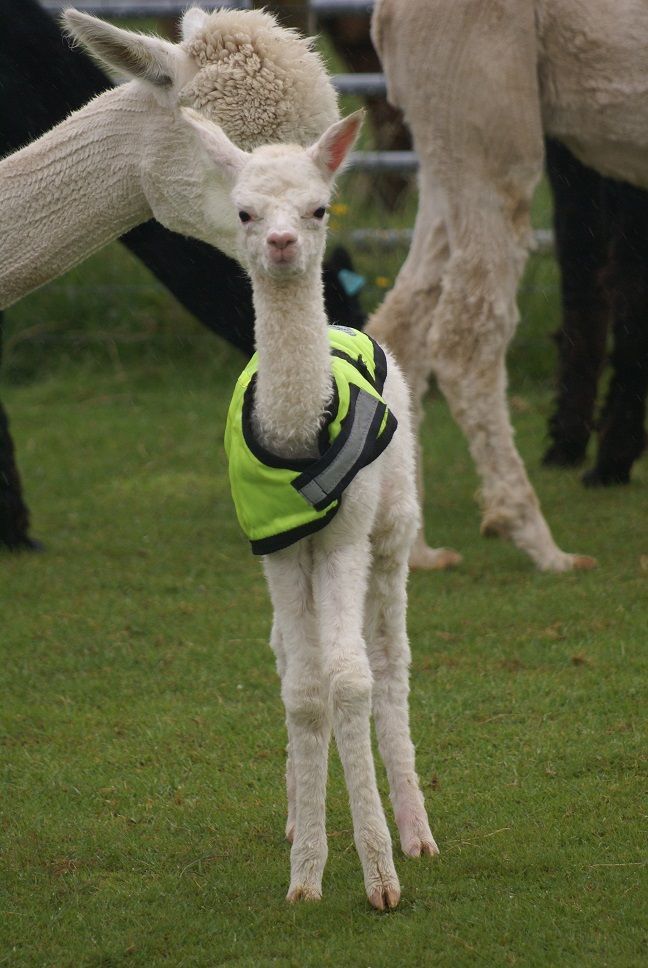 Tuesday and I was due a quiet day surely. One drive-by mating arranged and no one looking like birthing??

Pearl who is the mother of Pandora and grandmother of Athena was doing a lot of talking. Was she wasn’t she? In the end I decided that she was just talking to her off-spring as nothing else was happening. Whereas Roma (fine Romance) was being very vocal…she got out of the sand pit and threw herself on the ground. We brought her in and couldn’t find a problem, but she continued to groan. We called the vet…Roma is special…in more ways than one (a bit of a drama queen to say the least, but also one of our early home bred girls). Roma rejected her first born and tried to do the same with the second. If it were possible Roma would have her cria by elected C-section and would definitely bottle feed rather than breast. Anyway the vet decided she was indeed being dramatic and her cria wasn’t ready to be born.

Wednesday (today) I go to the barn for the usual checks at 6am (every one is in…they have free access to come and go). I spot Roma straight away…moaning and groaning still. Then I see a cria…it is obviously not hers…it is dry…it is sitting next to Pearl!

Pearl has had a beige St Patrick boy. The placenta is in the paddock, so she must have birthed some time ago and he has been strong enough to follow her in. Pearl is one of the females who came to us on agistment. She is 10 years of age and was extremely thin when she came. I purchased her and her daughter at foot…bought for reasons of heart not business…I felt so touched that she had come in with her cria so new born…she trusts us:))

Roma is now making such a fuss and is pushing, but nothing is happening. Paul checks internally…he cant feel anything close…we speak to the vet, he thinks the cria is low in the pelvis, as it was last night. The vet comes to visit… just as Roma gives birth!!!!! Two unnecessary call outs Roma …its a few years since that has happpened…Yep, if Roma was a human she would certainly be classed as high maintenance…love her! 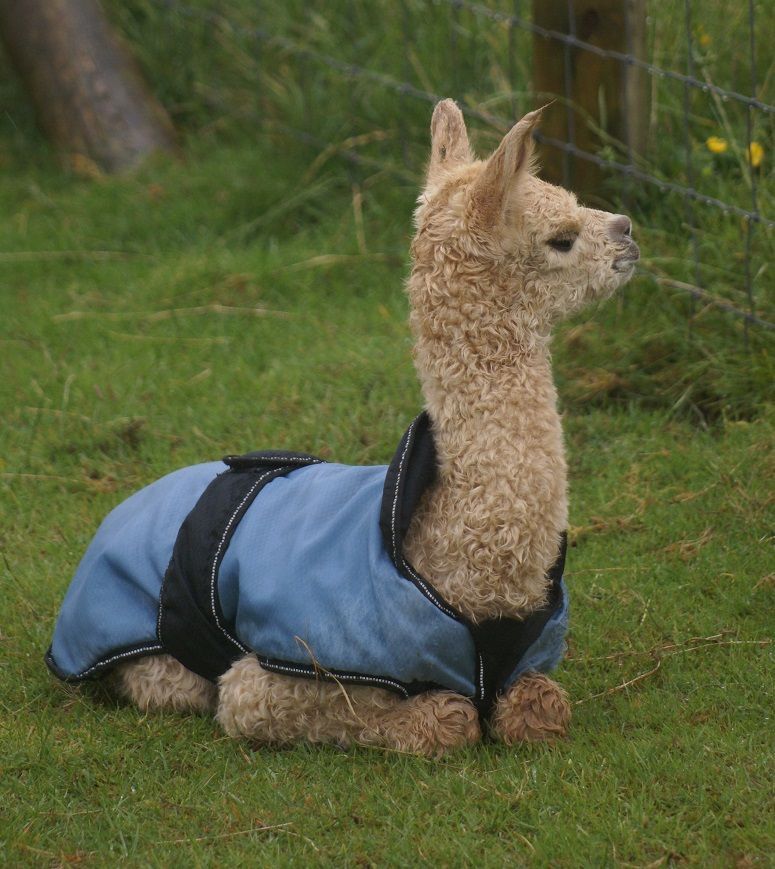 Roma’s cria: Beck Brow Chocks Away (he was up and off the minute he was out) sired by Timbertop CT Goldmine 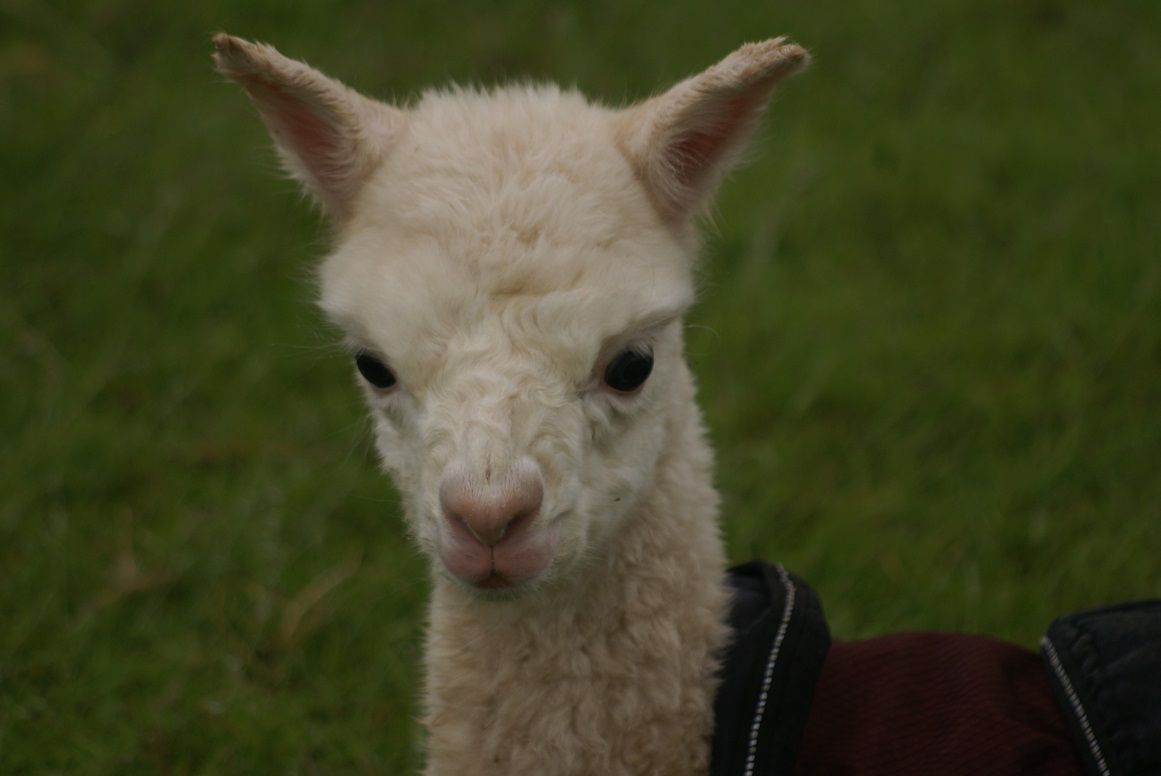 No further births today, but two before 7am is enough. Explorer and Goldmine have three mobile matings late afternoon and I have stacks of paperwork to catch up on. If I have the energy!

Categories: Blog
Births, legs back and a prolapse!
Failure of Passive Transfer and Plasma Transfusion in Cria