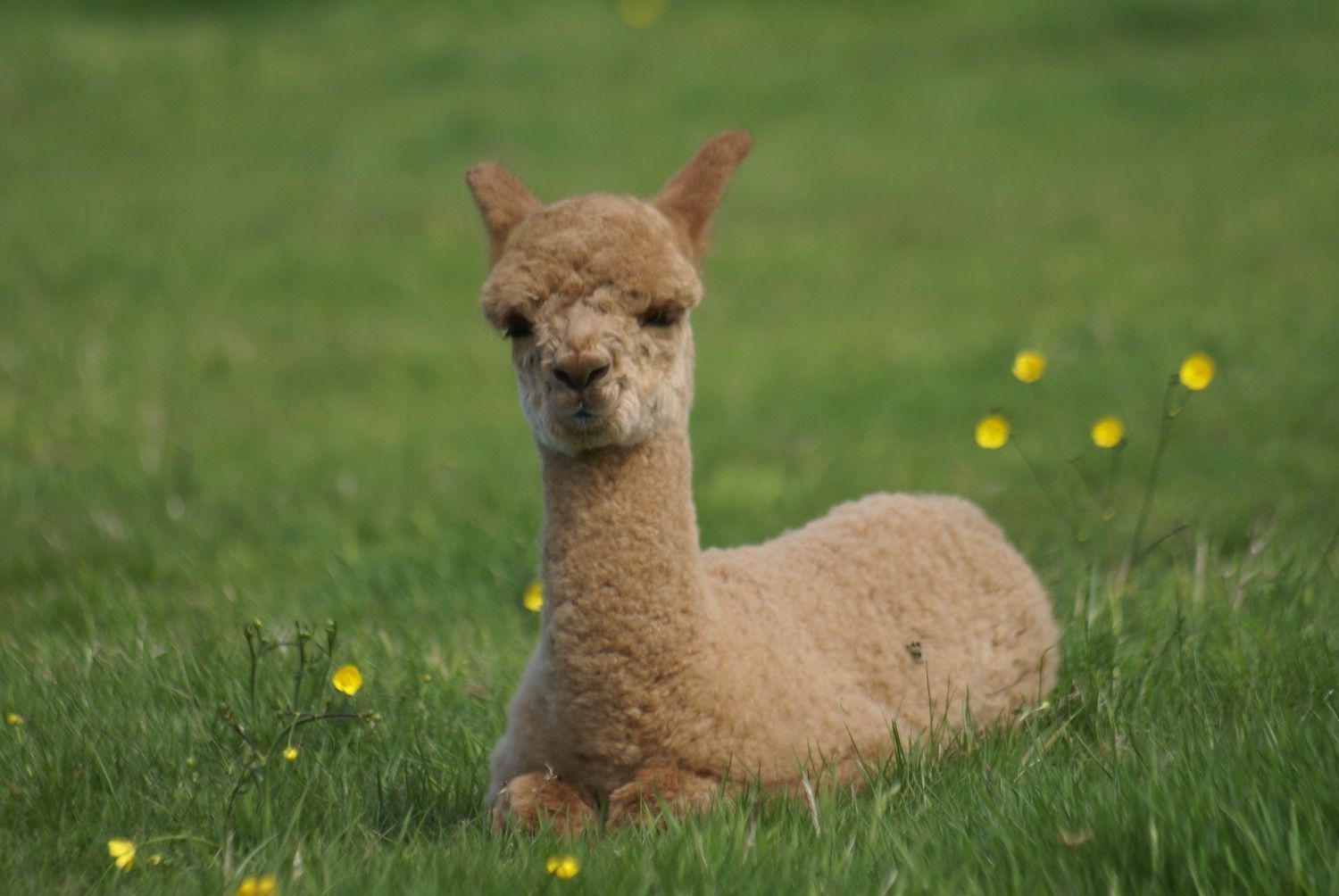 It’s a month since our first birth, and nearly as long since I have blogged. I think the delay in blogging is due to the wish to postpone our sad news (more on that later) but with lots of cria on the ground we have plenty to smile about…

Regular readers of this blog will know of Beck Brow Cat’s Pajamas; Supreme Champion winning female and daughter of two Supreme Champions; Ep Cambridge Lady Gaga and Waradene St Patrick. This was one of the births we were particularly excited about…one not to miss. Well that was the idea, but whilst I had headed off to Homebase and was deliberating over the colour charts, Cats had decided to birth around 6pm. I say ‘around 6pm’ as Paul went out to check and found a cria already kushed…Cats is so elegant…I can just imagine her thinking; “I will be having some privacy and and dignity rules applied here…thank you” 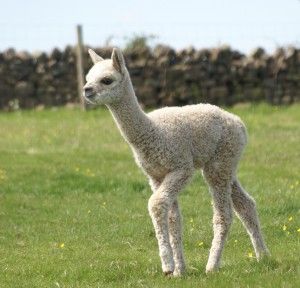 So it was, whilst I opted for the Farrow and Ball Smoked Trout shade of paint, Cats delivered a beautiful light fawn male (photo above at 3 weeks of age) who has been aptly named Beck Brow Bees Knees. He is the leader of the gang of boys…yes we have a gang of them…Nine out of ten to date (six are ours)…

Bozedown Campari, who is dam to our champion brown junior Beck Brow On The Money, obviously decided that we were so impressed she would try a repeat performance…well done Campari but a female version would have been very welcome. I jest, as we are grateful to have not only a healthy boy, but another very promising mid brown fleece. 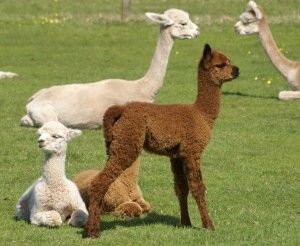 Photo above taken yesterday at two weeks of age, another confident cria whom we have named Beck Brow Back Of The Net (if he turns out not to be stud quality we will have scored an own goal with that name!!)

Next it was a son for Ep Cambridge Aria (dam of Valley Alpacas The Diplomat) the same pairing with Goldmine last year produced a lovely mid fawn female…this year it is a beige male, whom we have named Beck Brow Lyrical.

After a gold rush of boys I was hoping Beck Brow Explorer might change our run…but no. Renatta (dam of Supreme Champion Mr Darcy) presented us with another boy…and what a whopper. He looked about two weeks old when he was born….as I kept saying how pleased I was with him, we have named him Beck Brow Well Chuffed (if he doesn’t make the grade he might have to drop the ‘Well’ bit) 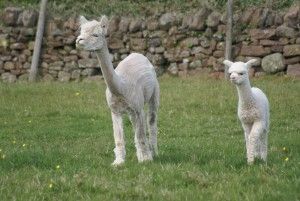 It was Explorer’s turn again the following day…and yes another white boy…I am hoping a rather special white boy. Furze Park Elvira (sire: Furze Park Telstar) was chosen especially as a match for Explorer, and they haven’t disappointed at this early stage. We have named him Beck Brow Read All About It (another presumptuous name…I might have to do some later registrations this year…don’t want him to be Old News!!) Below is his fleece at 20 hours-old. It is difficult to do it justice as the handle is exquisite… 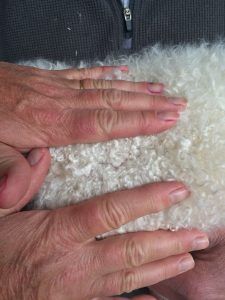 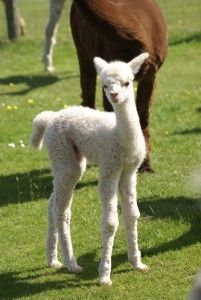 Beck Brow Read All About It (sire: Beck Brow Explorer)

Finally we had a female on Saturday when Inca Garland delivered a dark brown female (sire: Viracocha Black Sabbath) who has been named Beck Brow Mimi. The astute amongst you will have noticed that at the beginning I said that we only had one female, and that should have meant Goldilox. Sadly, despite our best efforts Sox lost her cria again at two weeks of age. It seems so dreadfully cruel, but she has been stoic. It cannot merely be coincidence that both cria developed peritonitis at 2 weeks of age (when no other cria have been lost to this). We have mated her to Black Sabbath to see if there was a mis-match with Goldmine. We would so love for her to have a family after her rejection as a cria.

We now have 31 Beck Brow females to birth. So plenty of time for some girls to be born. The agisted females have been all boys so far… 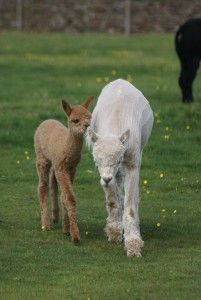 I am especially looking forward to seeing what Bozedown Anything Goes (pregnant to Bozedown Achilles) produces for us. AG was purchased at the Alpaca Classic last autumn and has settled in so well. She is so serene…a touch of the Lady Gaga’s about her (alpaca – not pop star). 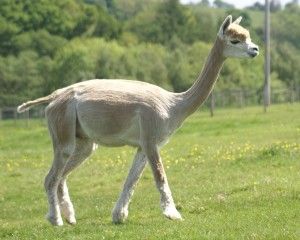 Another female eagerly awaited to give birth is Ep Cambridge Summer Solstice (sire: Windsong Valley Firedragon). We decided it was time to give Beck Brow Explorer a chance over a top quality coloured female…and who better than Solstice…now we would really like a fawn please (yeah we know…) 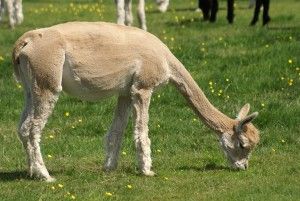 Always looking forward…next year we will be excited to see what Beck Brow First Edition (Eddie) produces for us. Eddie is the first born progeny of Beck Brow Explorer and a multi-supreme championship winning male. We have set him to work paddock mating with Beck Brow Posh Pants and Beck Brow Bebop A Lula. As Eddie has two championship winning full sisters, who all have very similar, very advanced fleece styles, we are pretty sure of what to expect from this line. His dam, Morden Hall Honaria is due to be our last birth of the year in early September. 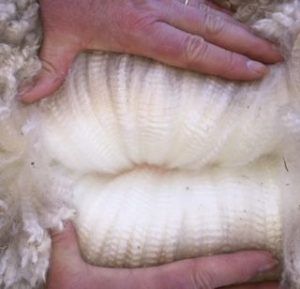 It has been a busy week, in amongst the birthing, Paul had a long day out delivering, servicing, geting services and receiving medical care…all from a 7am start and a midnight return. The main reason for the long trip was to take Ep Cambridge Lady Gaga down for a visit to Claire Whitehead at the Camelid Veterinary Centre. Claire is a specialist camelid vet, with reproductive health as one of her specialities. As Lady Gaga failed to become pregnant last year we decided to waste no more time and to seek out Claire’s help. The ultrasound scan suggested an infection and Gaga was was given a uterine washout. We now await culture and sensitivity results before starting an appropriate antibiotic.

On route Paul met up with Lulu from Lusi Alpacas. Lulu and Simon have purchased the BAS National Show Champion Black Male; Beck Brow Prime Suspect, as an additional herd sire for their elite black herd. We are delighted that he has gone to such a good home and wish them the very best. We have a lot of this male’s family within our herd and know he has a depth of quality that he will carry forward…exciting times. 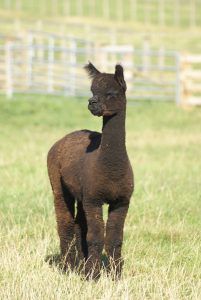 On the subject of new males; our two new boys will be arriving at Heathrow tomorrow evening. It will have been a long trip from Auckland and an even longer wait from purchase (since last summer) for their arrival in the UK. Kurrawa Legend’s Crusader and Gilt Edge Samurai have been especially chosen to meet our Explorer and Goldmine daughters in the future. I will be travelling down to Heathrow with Ian from Hannahston Alpacas (Glasgow lad) which will entail a lot of repetition…as I don’t understand Glaswegian and he doesn’t do Cumbrian!! 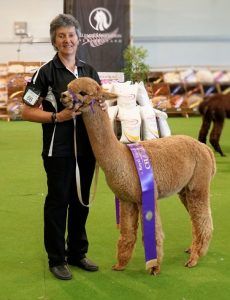 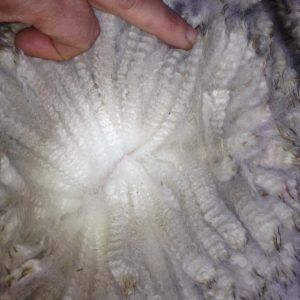 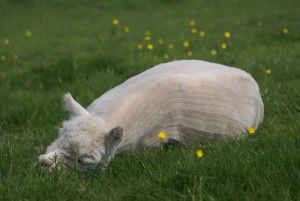 Categories: Blog
Foxy Sox and Goldilox
All about the boys….