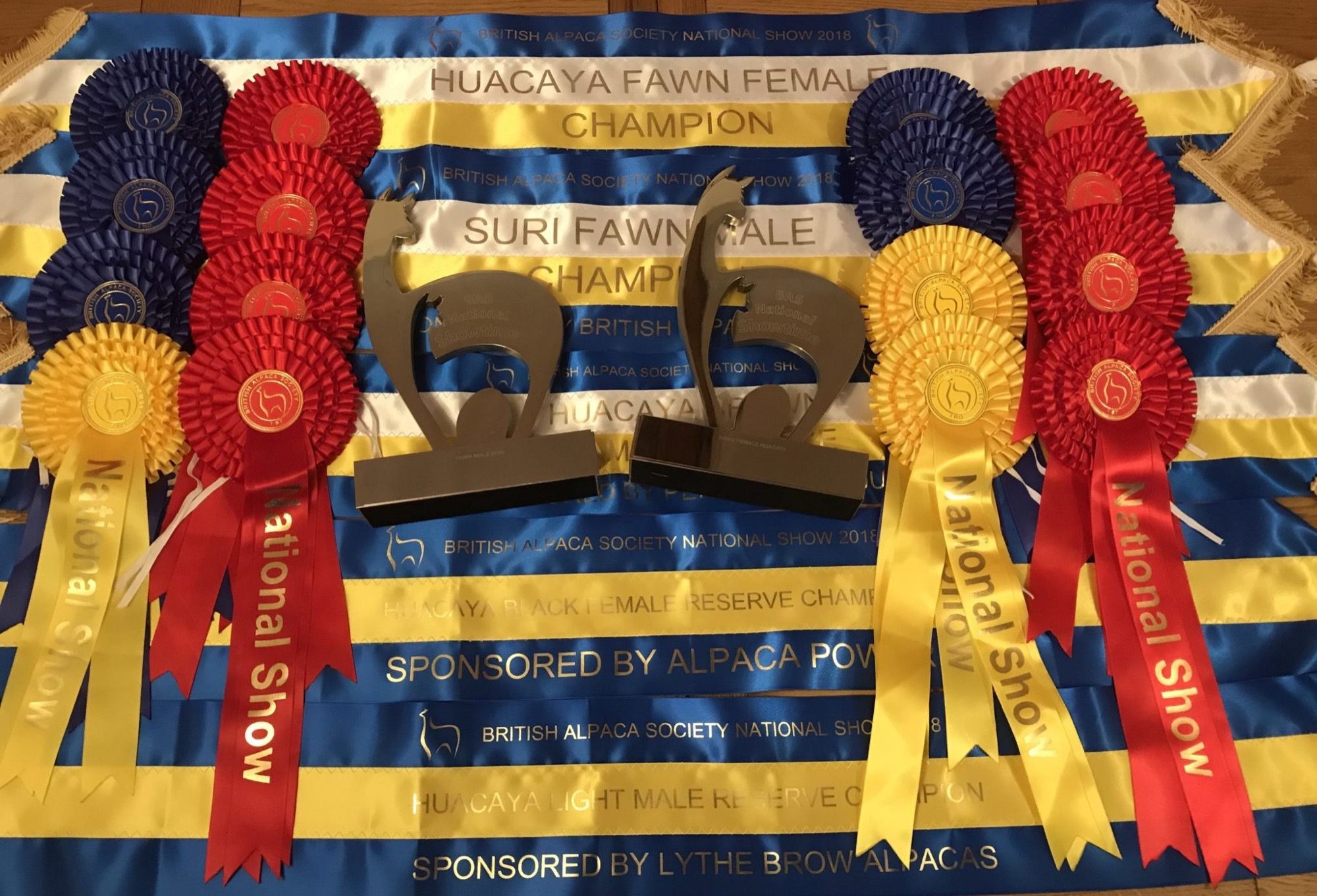 I always think it is strange to be offered “do you want the good or the bad news first?”… who would ever want the good news first…who wants to be given a balloon only for someone to pop it straight away? However, on this occasion I am going to start with the good stuff, then move on to the not so good. Although I am in fact waiting for a phone call, a call which may bring very exciting news, so this could end up a good news sandwich (fingers crossed).

The British Alpaca Society National Show was held at the weekend, 600 alpacas, 100 exhibitors and 4 judges all gathered together at the International Exhibition Centre in Telford. The show is a real credit to the Society and a much anticipated event for all the breeders who attend. The National Show gets bigger and better year on year, as does the standard of the alpacas being exhibited, as well as all the fleece and fibre entries and the number of trade stands.

It is always hectic setting up and taking down, showing animals and manning our Gold Sponsor stand, so we were grateful to have help from Ole and Laila owners of Alpacajoy of Norway, Jane from King Garth Alpacas and Robyn and Craig from Beck Brow. Thank you all for the help and the fun.

Therefore we were delighted when 19 of the 20 were placed (Geisha had a tender fleece) with only 3 placed below 3rd position.

Some of the stars were;

Beck Brow Kiss Me Quick who took the Champion Fawn Female (sire: Goldmine). Her dam is Beck Brow Snooty Boots (also dam of Beck Brow Jimmy Choos now owned by Inca Alpaca, and Beck Brow Fair Play now owned by Old Felton Alpacas,  both championship winning blacks). Boots is due another Goldmine progeny this year. Then we have to make the decision, do we put her back to Black Sabbath again? 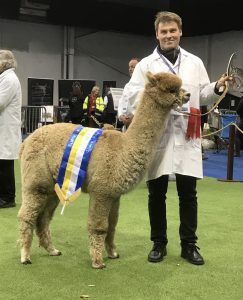 Kurrawa Hell Raiser of Beck Brow was awarded the Fawn Suri Male Championship. Hell Raiser has the most laid back personality as well as a superb fleece (yes misnamed!). We cannot wait to see his progeny in 2019 (yes its a long game!) 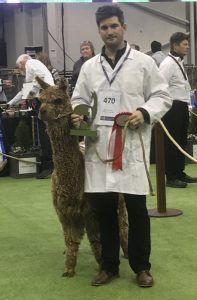 Although we are largely seen as breeders of the lighter coloured Huacayas, we do like to dabble on the dark side and took along one black entry. That was Beck Brow Rock Star (sire: Viracocha Black Sabbath. Dam: Beck Brow Foxy Sox) a junior black female, who rocked up and took the Reserve Champion Black Female award. Thankfully we have a repeat of this pairing due in the summer. 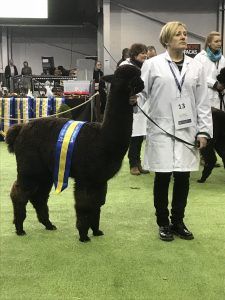 One of my favourites and hopefuls for a higher placing was Beck Brow Vidal (sire; Goldmine.) Vidal was found born on a cold wet day with an unrecognisable temperature. Thankfully we had a generator in the belter, and a hairdryer, and eventually got his temperature up to  36 degrees. After a 100 mls of colostrum he was up and off. He is a proper little character and it took all of Ole’s expert handling skills to keep him behaving in the line up. However this was rewarded with Reserve Champion Light Male. 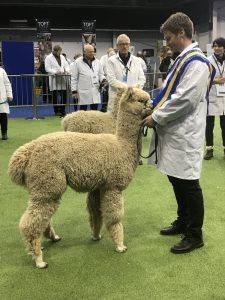 We took along Prima Chanel (sire; Gilt Edge Samurai of Beck Brow) who resides at Beck Brow on agistment. Another junior and another Reserve Champion Light, in the females this time. She did put up a good fight for the Championship but was pipped by a impressive intermediate owned by Bozedown Alpacas. 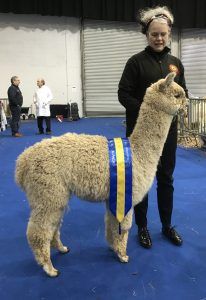 We were also particularly pleased with Beck Brow Bees Knees (sire; Goldmine. Dam: Beck Brow Cat’s Pyjamas) who was second in his Intermediate class behind the champion fawn male and was very close to receiving the reserve champion placing.

Also a very near reserve champion, was Beck Brow By Design (sire; Explorer. Dam: Bozedown Celestrial) who was first in a very competitive junior white class. The quality and quantity of white females was outstanding and it was a credit to her to be so close to the championship (awarded to two Intermediates). By Design is full sister to championship winners; Trendsetter and Fashionista (now owned by Old Felton Alpacas). 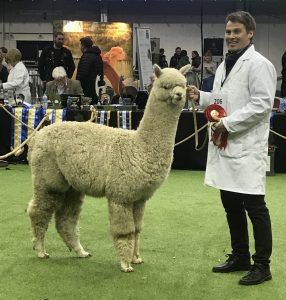 We had only two fleece entries. Beck Brow Back of The Net (sire; Goldmine. Dam; Bozedown Campari) who was awarded Champion Brown Fleece and Beck Brow Bedazzle (sire: Beck Brow Explorer) who was placed 2nd behind the Supreme Champion (Bozedown Torres) 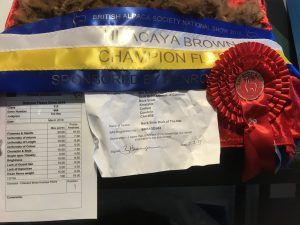 We had a great time meeting friends old and new. The judges did an amazing job keeping us informed and entertained (thank you Liz Barlow, Karen Caldwell, Robin Naseman and Tim Hey) and a big thank you to our show team for doing us proud. Congratulations to Fangdale Alpacas and Houghton Hall Alpacas for their Halter Supreme Championships and Bozedown and Alpaca Synergy for the Fleece Championships. 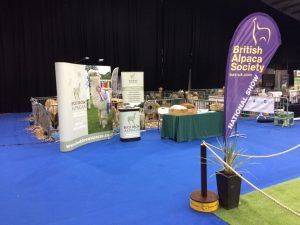 That was the fun bit. It had been a rather challenging few weeks running up to the show with extreme weather conditions. We were beaten by the Beast from the East who kept us snowed in for 5 days. Fortunately we were well stocked. There were a number of friends who were concerned about our wine supplies, but we had enough for a week or two down the cellar! We lost a bedroom ceiling, a bay tree and a large field shelter in amongst it all. We were fortunate that none of the alpacas were hurt, as they had obviously been inside the shelter when it took flight. The bay tree I know is insignificant (although it was large) but I like to keep bad things in threes! Actually I think we will move swiftly on. 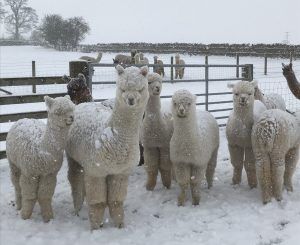 Happy times ahead (hopefully) with birthing soon to begin. Our first female is due on the 8th of April and is already bagged up, so I expect that we won’t have too long to wait. we have 51 pregnant females due to birth (45 belonging to Beck Brow) pregnant to 9 different stud males. We will also have three new males entering the breeding programme in 2018.  Apart from Hell Raiser (as above) we will be introducing Beck Brow On The Money (multi-championship winning brown) and Gilt Edge Kudos (shared with Old Felton Alpacas) who will be coming into the UK next month. Kudos is a Supreme Championship winning son of Ep Cambridge Invictus (an AAA National Show Supreme Champion) who is a son of Windsong Valley Firedragon.

Oh and the phone call?… good news…but not for the bank balance!

Categories: Blog
How many months….
The Beck Brow Alpaca Stud gets some new members.