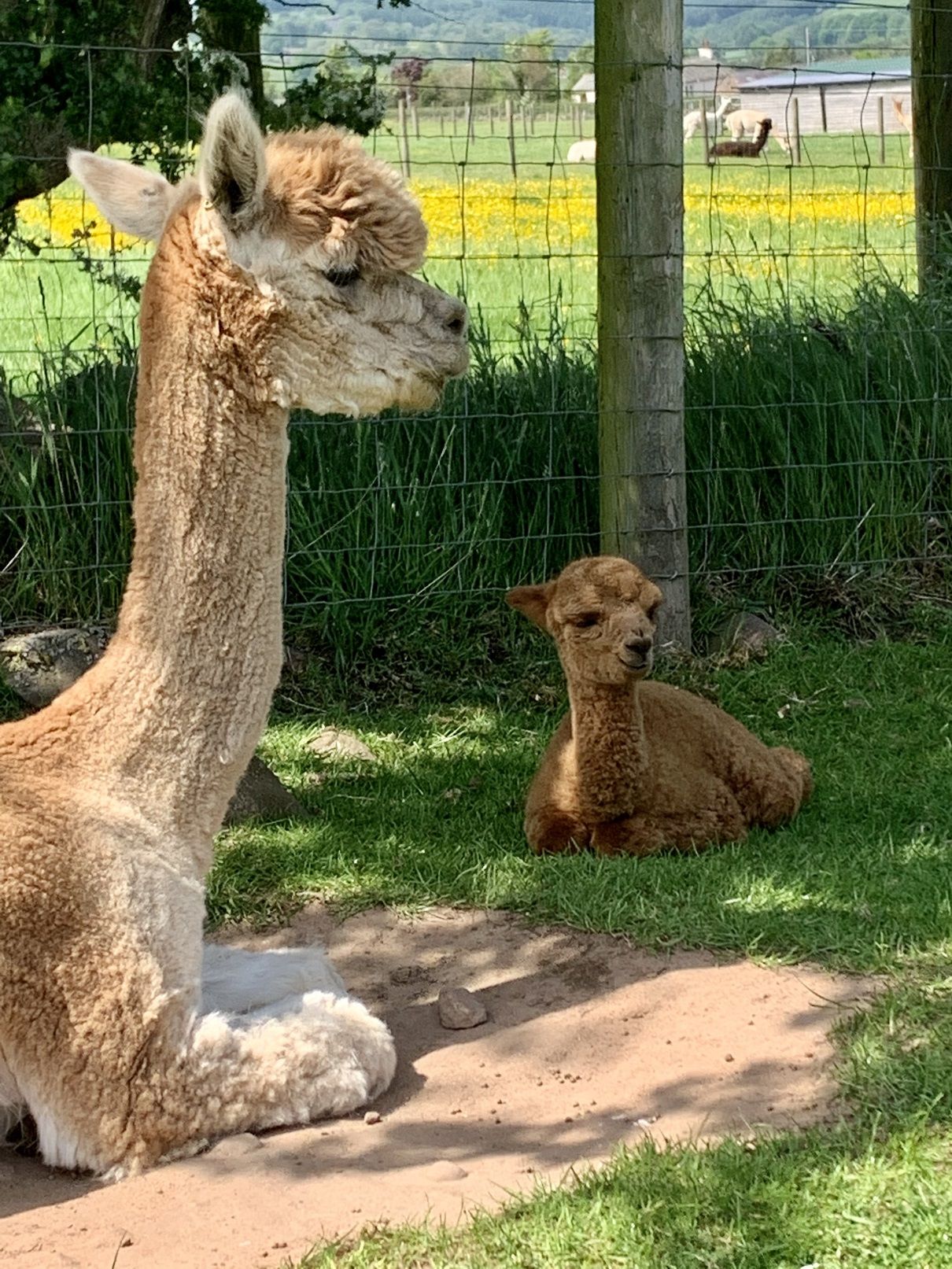 At last time for a ctach up. Following on from my last blog…

As mentioned in my January blog our shearing was booked for early April. We saw the benefits of shearing before birthing in 2020 and decided to repeat the experience. We ordered in lots of straw for housing overnight in our numerous barns, belters and shelters. We were fully prepared…but not for waking up to this on the morning of shearing day … 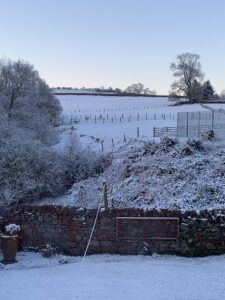 Yes…that’s right…the view from the bedroom window was white. Thankfully it was melting by lunchtime and the shorn alpacas, after a full tummy of haylage, went out to see grass peeping through. As with last year, we kept the alpacas inside at nights for a while to acclimatise. Whilst I am not going to advocate shearing in the snow, it is interesting to note that we had no alpacas shivering. Strangely so, as we usually do have some when shearing in late May. It would seem that going from overheating, to naked on a cold wet day in late May is more challenging than April conditions. Matthew (MK Shearing) did a great job with James assisting. Lovely haircuts and fleeces so well looked after. We just need to fitten up for next year!

The new barn, which was completed just 4 days before shearing, has come in very handy with the awful wet and cold May we have had. The pregnant females are now split between the two main barns, with those due first nearest the house. I know they say you can’t have too much barn space, but I seem to spend too much time trying to keep barns, belters and shelters swept and clean. Hence the introduction of a latrine in the new barn which is working pretty well (let’s say that they try but some are better at aiming than others) 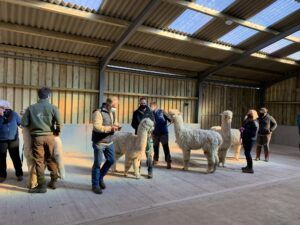 The back of the barn 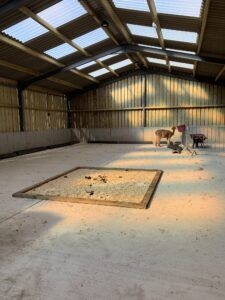 The Latrine in the barn

Paul has eventually given up on his vintage Massey Ferguson, which had become increasingly unreliable and needed some time and money spent on it. With paddock sweeping falling behind, and nagging in his ear, he purchased a tractor that actually starts when you ask it too. The real reason I believe that he relented was he was sick of getting wet with no cab. Of course, as soon as it arrived the sun came out and he is driving around with the doors open and the roof up. 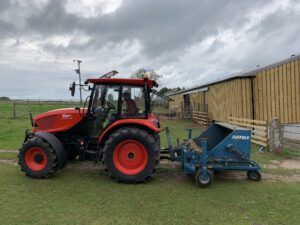 I know I have claimed myself to be cured of purchasing alpacas, and to be fair it has been a while and the house has benefitted from a bit of a refurb, but I am back on form. My search for new coloured genetics lead me to the purchase of Limestone Red (you can read all about him in the News Section). Red is currently in one of our isolation paddocks with Skittle. We pre and post-movement Enferplex test and once we have the results he can join the other males in his year group. He is such a lovely boy. 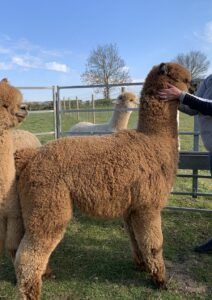 Our first cria of 2021 was born in January. I know its too cold in Cumbria, but this one was born in Victoria, Australia. Thanks to Kurrawa Alpacas we have a little herd on the AAA registry. A very promising white male was born with assistance from Natasha. Dam Forestglen Champagne Moment. Sire: Kurrawa Legend’s Enforcer. We have registered him as Beck Brow Game On. Hopefully he will get his day on the AAA show circuit. 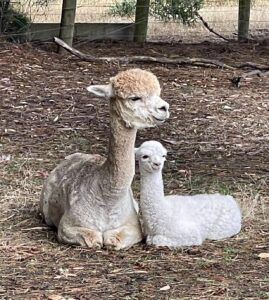 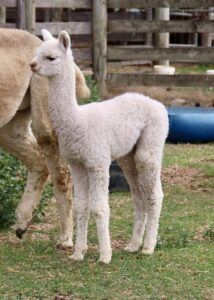 Beck Brow Game On at a few days old 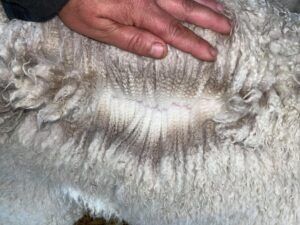 Beck Brow Game On – fleece at 4 months of age

Birthing season in the UK got off to a good start at the end of April. Two healthy boys were born on the same day and then they have come at a steady flow. Although, it did seem at one point that the wetter it was the more cria we had born. That said there were few dry days in May. I am not going to pretend it didn’t make for hard work. It was so wet and cold two cria needed the heated pad and hairdryer treatment to get warmed up. It was amazing, although healthy, how quickly they became cold even coated. 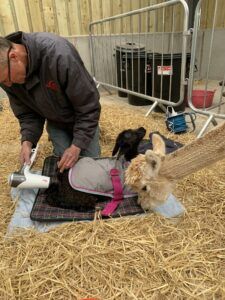 Cria getting warmed up in the barn

Two of our first to birth were two females purchased from Houghton Hall Alpacas at the BAS National Show 2019. These two females (Suzie Q and Lucky Spirit) have remained close having spent their isolation together. Although mated a week apart, I saw them in the paddock early one morning hatching a plan…. 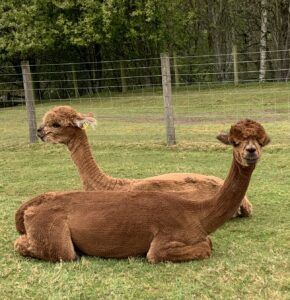 … looking like a half-decent day weather-wise they decided to go for it. Lucky Spirit was first to birth producing a lovely brown Beck Brow On the Money daughter. Followed a couple of hours later by an identical result. 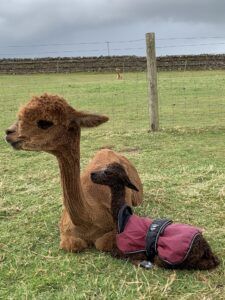 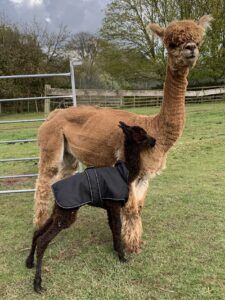 Suzie Q and her daughter 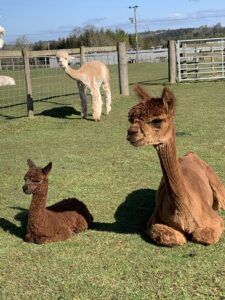 Oh La La and her daughter 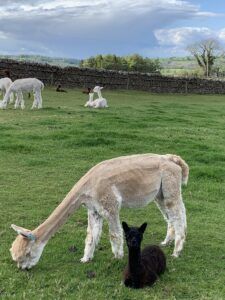 Summer Solstice and her daughter 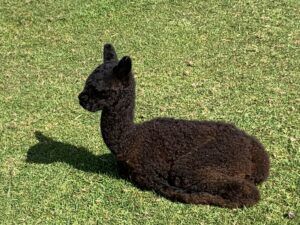 A daughter for Solstice

So far we have 34 cria on the farm. Just about halfway. Twenty-five of those are owned by ourselves and thankfully we are having a better ratio of females to males than last year. The tally at this point is 15 females v 10 males but a long way to go.

We did sadly lose a male (not included in numbers above) he was born a dummy cria and was given colostrum and plenty vitamin B1 but we saw little improvement. We managed to get him to drink from his mum but that is all he did…stand (often needing prompting)…drink…wee…sit down. We had bloods taken and he had no signs of infection but it was obvious he had some muscle breakdown, so we spent our days running around making sure he stood regularly. He was also given plasma and antibiotics as we all knew that he was vulnerable to an infection sitting about (especially pneumonia). We looked after him so intently for 12 days but sadly we did lose him to sepsis, despite further intravenous antibiotics. The postmortem is still ongoing but his heart was strong and he had no traumatic brain injury. The most likely primary cause is ischaemia during birthing but we might never know. Such a beautiful little soul. 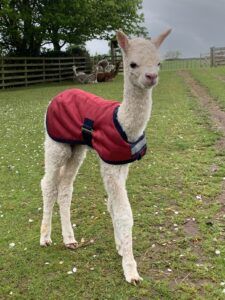 Beck Brow Fashionista, a first time mum, is such a star I thought that she deserved a special mention. She does of course come from a star-studded family having Bozedown Celestrial as her dam (she who specialises in mobile catering feeding all those in need). Fashionista has had a beautiful Bozedown Blaze of Glory daughter…. 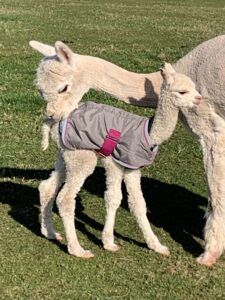 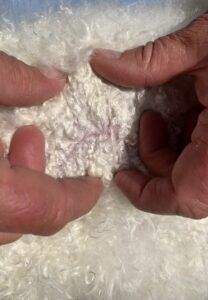 Of course just like her dam….she looks after everyone… 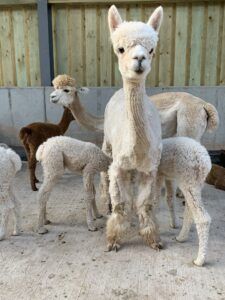 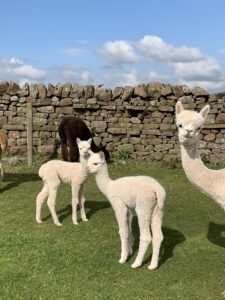 This is such a fabulous family line, we have retained all Fashionista’s sisters. However, we are pleased to announce the purchase of Beck Brow Dressed to Impress by Anne and Mike of Brillberry Alpacas in Buckinghamshire. The dam of DTI is Beck Brow Trendsetter a fill sister of Fashionista (both sired by Beck Brow Explorer) and his sire is the outstanding Bozedown Blaze of Glory. DTI is the image of his sire and shares fleece qualities from both these outstanding lines. Sadly never shown, he is a stand out both in conformation and fleece. 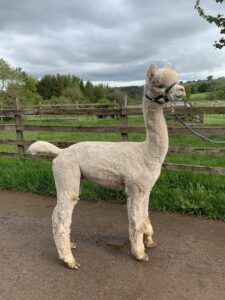 We received the results from our first batch of genetic colour coat analysis and boy did we get some surprising results. The most interesting being that Kurrawa Legend’s Crusader of BBW is actual a hidden classic grey. This accounts for the number of blue-eyed whites (BEWS) he sired when mated to whites. We were using him as the wrong colour. This was confirmed when a white daughter of his produced a classic silver grey (sired by On The Money) for a client. We only tested two of his daughters (we will test more now) and one of those came back as hidden grey. Luckily I had paired her with On the Money and she has produced a lovely rich brown boy (I know we need to be Beck Brown Alpacas) 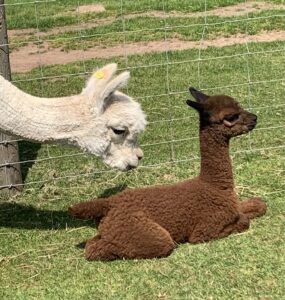 The other surprise was how many of our alpacas are actually black with dilution genes. Which would account for our success in getting blacks from our fawns with Black Sabbath. Both Beck Brow On The Money and Hit for Six are genetically black. Beck Brow Come As you Are our lovely modern grey boy (who has started working) is genetically black with a roan pattern. 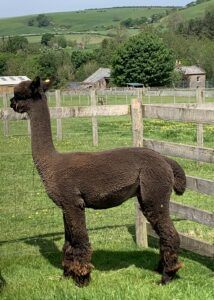 Beck Brow Come As You Are

Normally (whatever normal is these days) we cria shear in July. However, when we realised that Matthew would be passing our door on his way back to Ireland in late May, we decided to shear the first batch of cria. Twenty four were shorn in the record time of within the hour. Having decided that all those 3 days and older would be sheared we decided to minimise the risk of rejection by coating the cria the night before. Coats were removed for shearing and quickly replaced before heading back to mum, we didn’t even have a whiff of any rejection. Either just good luck or the plan worked Next cria shearing end of July. 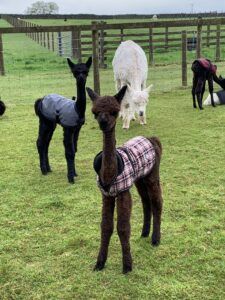 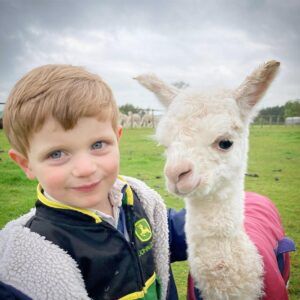 The grandchildren come to the farm regularly and enjoy the outdoor space. Especially so the nature around the pond and in the five acres of woodland. Yesterday it was the excitement of seeing the ducklings and Theodore catching a frog. 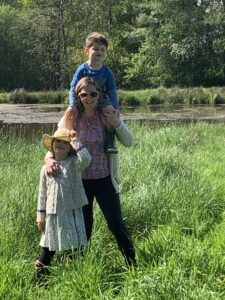 Robyn, Hettie and Theodore at the pond 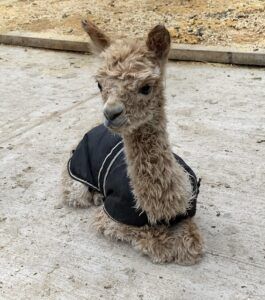 Our first Suri of the year