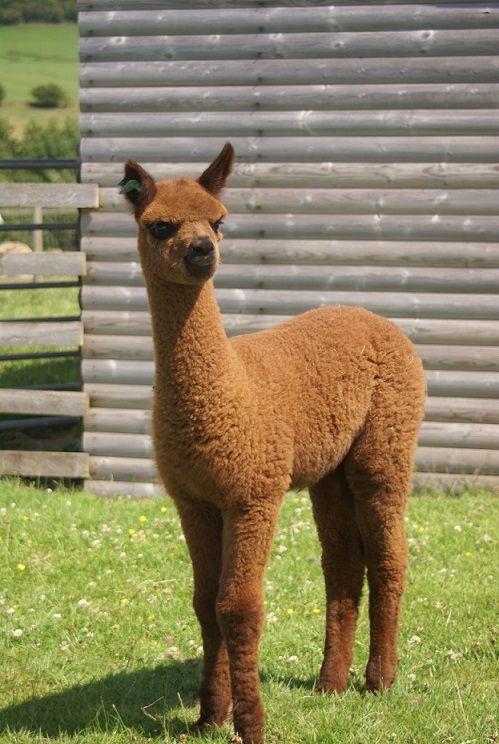 So far. So good…now that might be jinxing ourselves, but we have had a pretty easy birthing season so far. Okay we have had a c-section and a breech birth, but both were handled brilliantly by our vets, and both had a good outcome. We have had 40 born on farm so far, 21 owned by Beck Brow. We have had 2 Suri cria born (both male ) and 19 Huacaya (13 female). We have 11 left to birth (10 belonging to us).

One of the happiest outcomes, has been the birth of a healthy daughter for Beck Brow Foxy Sox (sire: Waradene St Patrick of EPC). Foxy Sox was hand reared having been rejected by her dam, and is very special to us. She herself, was a fantastic mother, but lost both her previous cria to peritonitis. The previous cria had both been born at 330 days and were 6kgs at birth with slow weight gains. Despite plasma, both were lost to infections. So it was a relief when Sox went 348 days and delivered a 8.5 kg black female (sire: Viracocha Black Sabbath) who weighed in today at 12.3kgs. We have named her Beck Brow Rock Star (Roxs) 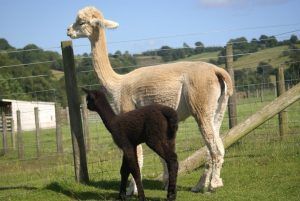 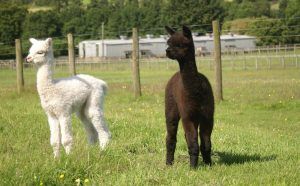 It has been rather nail biting waiting for the cria to arrive, and for them to be assessed. Had we made the right decisions? Last year, with our 2 new stud males arriving from Australia and New Zealand, we felt if we were going to let them prove themselves, we had to give them plenty of girls, and some of our top girls…girls who would have otherwise had a date with Goldmine or Explorer. Males who have proven themselves to provide us with a show team. Thankfully Kurrawa Legend’s Crusader of Beck Brow and Gilt Edge Samurai of Beck Brow have done us proud.

Crusader has the most cria so far (as he worked earlier being a year older) and has exceeded all expectations, especially as he is producing colour, and of a quality we expect from our top whites. The fleeces have a fabulous handle, are exceedingly bright, long and extremely organised right down the legs. All on strong frames. Phew…. 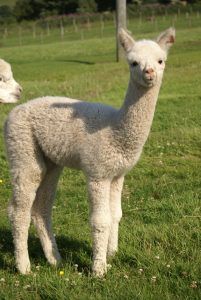 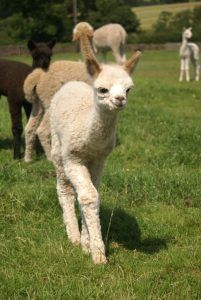 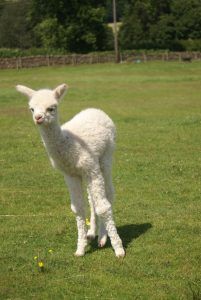 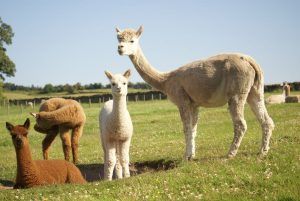 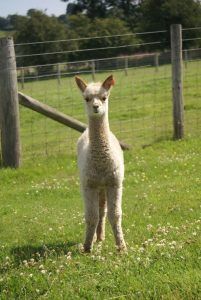 Possibly my favourite, Easter-Wood Adelle produced a handsome boy on Sunday, Crusader’s first male and a stonker. He was 370 days gestation and looks like he is at least a couple of weeks old. Very Excited to see how he develops. Whilst I am normally very quick at choosing names, this one is taking some thinking about… 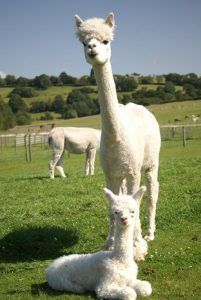 Easterwood Adelle with her cria. 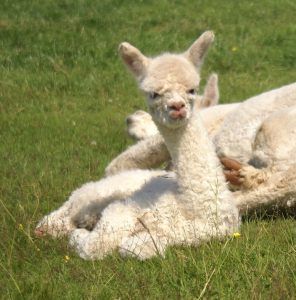 Samurai has only had females here at Beck Brow, but has had a fabulous looking male born at Acton Hill Alpacas. Five in total ranging from Beige (1), Mid fawn (3) to Brown (1). As expected the cria appear to be incredibly dense, at this early stage, with good coverage. They also have well organised fleeces and good frames. Only 2 of those born belong to us, having sold 2 females who have gone on to produce daughters. We are starting with a Japanese naming theme… 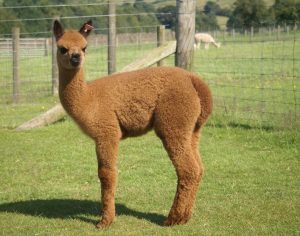 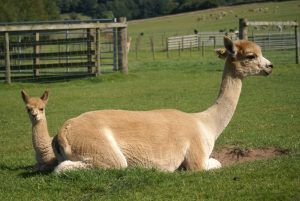 Of course we couldn’t leave our established boys with no progeny to be born. Our first birth was a little early for us.; Beck Brow By Design (sire: Beck Brow Explorer) was born when we were at the British Alpaca Society National Show (28th March). She thrived from the word go, initially gaining between 400-500gs per day. She was last weighed on Monday and was 34 kilos (not even 4 months). 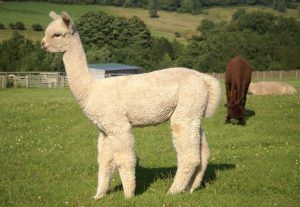 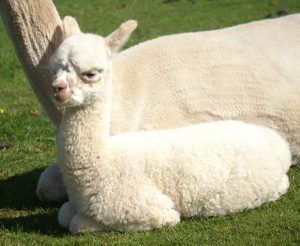 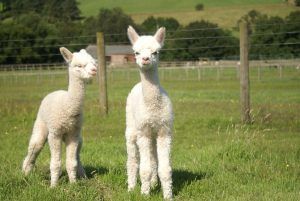 Our 2 Windsong Valley Firedragon daughters (Stargazer and Solstice) both had Explorer progeny. Solstice gave us a full sister for Beck Brow Hey Now (show champion 2017) who looks to be on a par with her brother.

Goldmine and Campari produced another full brother for the brown championship winning boys. He also has a lovely fawn female with Garland, (he definitely got under used. but we only had so many fawn/brown females to share out. I have made up for that this year, as we have more coloured maidens) 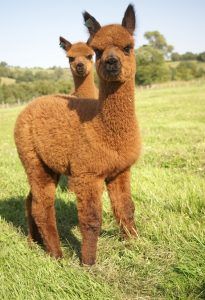 Beck Brow Out Of The Park (sire; Timbertop CT Goldmine of Beck Brow). Full brother to On The Money and Back Of The Net.. Talisman behind. 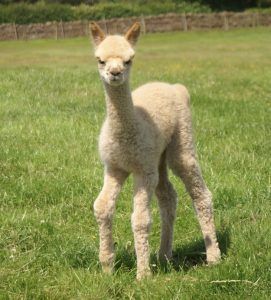 Poor Black Sabbath fared even less well in the sharing out of female (we decided to try Samurai over the few blacks that we have. They are yet to birth). Apart from Roxs, his only other cria is a brown male we have named Talisman (who is looking very nice). He is also pictured at the top of the blog. Sweet Secret, dam of National Champion Prime Suspect is due in a couple of weeks. 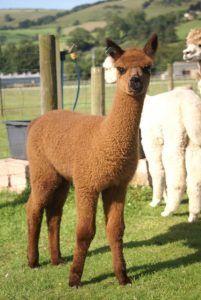 We also brought in some outside genetics, with the use of stud services by Bozedown Achilles and Bozedown Bourbon, and are delighted to have added two lovely coloured females to our herd. Both have beautifully soft handling fleeces (buttery is often used as a description). 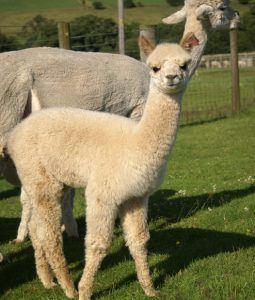 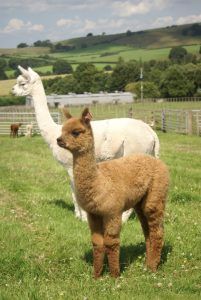 We have 86 females (resident here) who will be mated this year. That is without all the outside services, so we have to be very organised about giving the boys plenty of rest days. Thankfully not all of those will birth here in 2018. As I said in my last blog we are reducing numbers. At present 33 adult females (some with cria at foot) are moving to various homes. On Sunday the Kingwell herd (7 adult females), who have been agisted here for the past four years, was very astutely purchased. The new owners are today, also the owners of a beautiful fawn Samurai daughter born at 9.15 am. The herd consists of mainly pregnant females, who will be producing progeny from Crusader, Explorer, Samurai and St. Patrick in 2018. An exciting purchase, adding a real depth of Australian and British genetics to a relatively new herd.

Our new Suri Stud (Kurrawa Hell Raiser) is stuck in New Zealand due to some red tape issues. Thankfully Neil (West Wight Alpacas) and Chris (Spring Farm Alpacas) brought up some fabulous males (Amadeus and Aslan) so the majority of our Suri girls are spitting off. Anyone in New Zealand who wishes to purchase a brown Suri stud male (Australian National Champion 2016…

Two cria born today. Time to check them out…