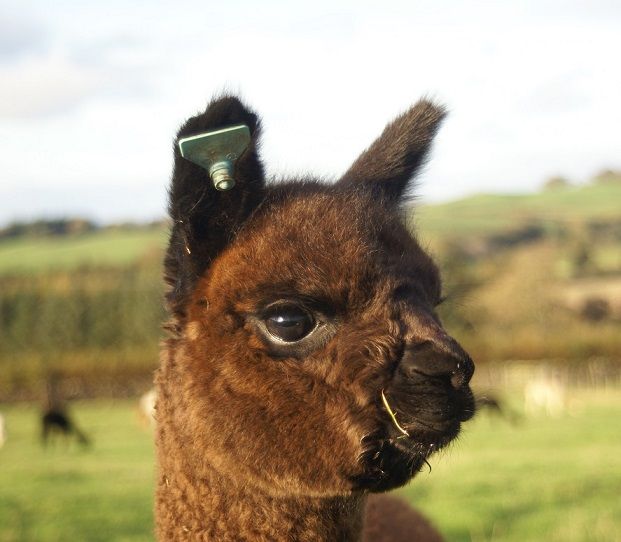 All a bit late for summer unfortunately. My feet have never seen a flip flop all year. The wellies have worn out (I have bought myself a couple of new pairs, just so I can decide which ones to wear – gets a bit boring otherwise). We have no home grown hay, no sun tan, and few photos… but some lovely cria.

So the camera has been out. Excuse the shadows but at least they are dry (double click on photos to enlarge) …

Beck Brow Stand and Deliver (sire: Beck Brow Explorer) is a bit of a man for the ladies. He already weighs over 30kgs at three and a half months of age. Firstly he is seen with King Garth Ab Fab (sire: Gilt Edge Samurai of Beck Brow). 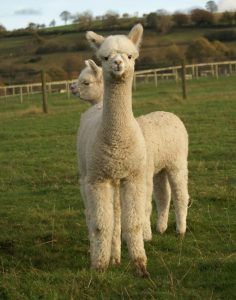 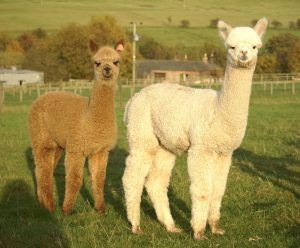 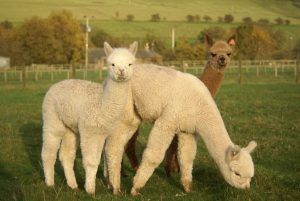 BB Stand & Deliver with the girls

Speaking of good weight gains; Beck Brow By Design (sire: Explorer) has grown like a mushroom since day one. She was born whilst we were at the National Show this year. Current weight; 50.5kgs at seven months of age. Now there is an absolutely strong argument that she should be weaned, however as her dam Bozedown Celestrial weighed in at 91 kgs, I think she is managing okay! Celestrial has topped up an adopted cria most years in the past. By Design will be weaned with a group from her paddock next month.

It has to be said she is a bit of a poser for the camera. 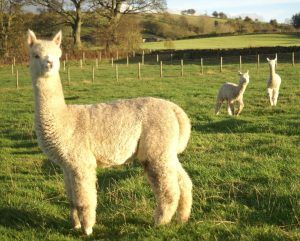 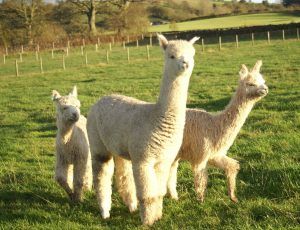 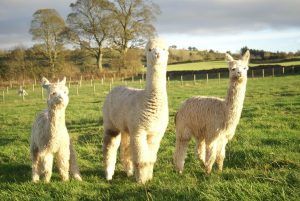 Rather more camera shy, is her niece Beck Brow Go Getter (sire; Kurrawa Crusader of Beck Brow). Go Getter’s dam is the lovely Beck Brow Trendsetter but I never seem to get a good photograph of her. She is so bright she burns out. 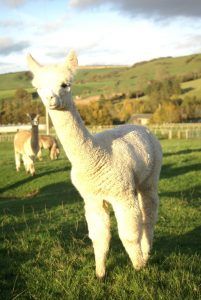 Now for some colour… we have had a lot of brown this year. Bozedown Campari of course produced a full brother to her two brown champions. Beck Brow Out of the Park (sire; Timbertop Goldmine of Beck Brow) is the image of Beck Brow On The Money and has the same cheeky character. 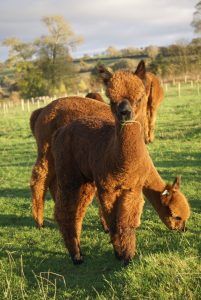 Beck Brow Out Of The Park 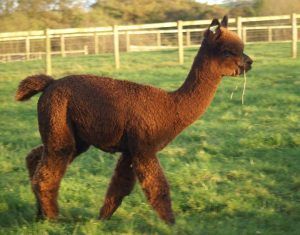 Van Dieman Inca Chaska has also produce a lovely brown male. Beck Brow Talisman (sire; Viracocha Black Sabbath) is such a lovely rich colour and has such a dense fleece. 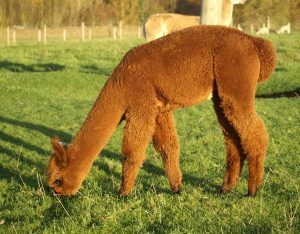 Our third brown male is Beck Brow Damascus (sire; Samurai) who is also looking very promising. The show team could be looking rather colourful next year! 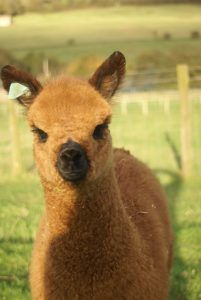 And it doesn’t stop with the boys. Beck Brow Seventh Heaven has the prettiest brown daughter, sired by Bozedown Bourbon, we have named her Beck Brow Cloud 9. 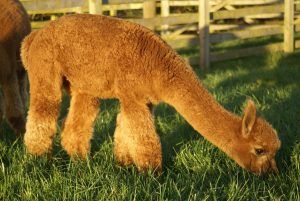 Our first Samurai cria to be born was Beck Brow Geisha Girl. A lovely surprise from a light fawn female (Bozedown Anything Goes). 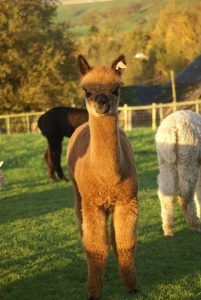 One of my favourites of the year is Beck Brow Razor Light. I feel that I am now in great grandmother territory, as Razor Light is sired by Beck Brow First Edition (sire; Beck Brow Explorer. He may look a scruff bag in the photo…but inside he is wowzer! Dam; Beck Brow Sugar Babe (a distant line breed of both Spartacus and Remarque) 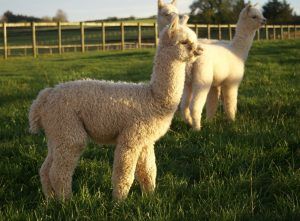 Okay I have a few favourites so I will make it three in a row…next up is Beck Brow Vidal (sire; Goldmine). Such a personality and the densest fleece. 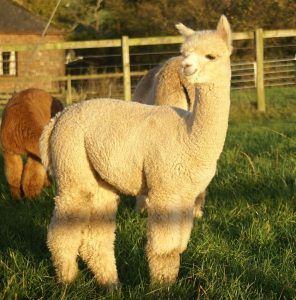 I dont think it really shows in photographs just how organised Beck Brow Law Enforcer’s fleece is. As with all the Crusader cria he is really friendly and sweet natured. 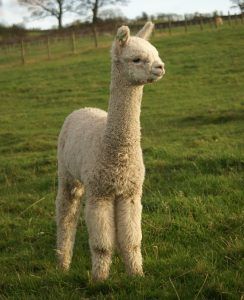 We have a black and a might be black. Beck Brow Foxy Sox has a lovely bay black daughter whom we have named Rock Star (Roxs) who is sired by Black Sabbath. 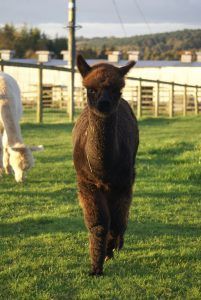 And Cambridge Scarborough has a son, Beck Brow Bevan, sired by Samurai…could be black…could be brown! 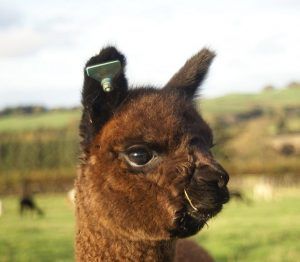 We have some lovely fawn females including; Beck Brow Ray of Sunshine (sire; Goldmine) 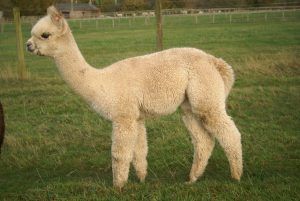 Beck Brow Cheers (sire; Crusader) who was deliver by C-Section. Her dam is Beck Brow Bottom so maybe it is apt that I only got a toilet shot! 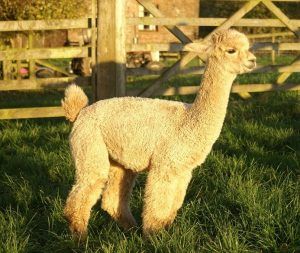 The photo does not do justice to Beck Brow Dakota (sire; Bozedown Achilles). Dam Beck Brow Dixie Chick. She has such a soft handling fleece. 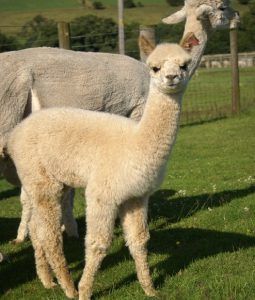 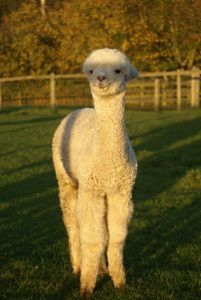 Categories: Blog
Reflecting on the Summer and 2017 Cria
Beck Brow Winter Catch Up