All about the boys…. 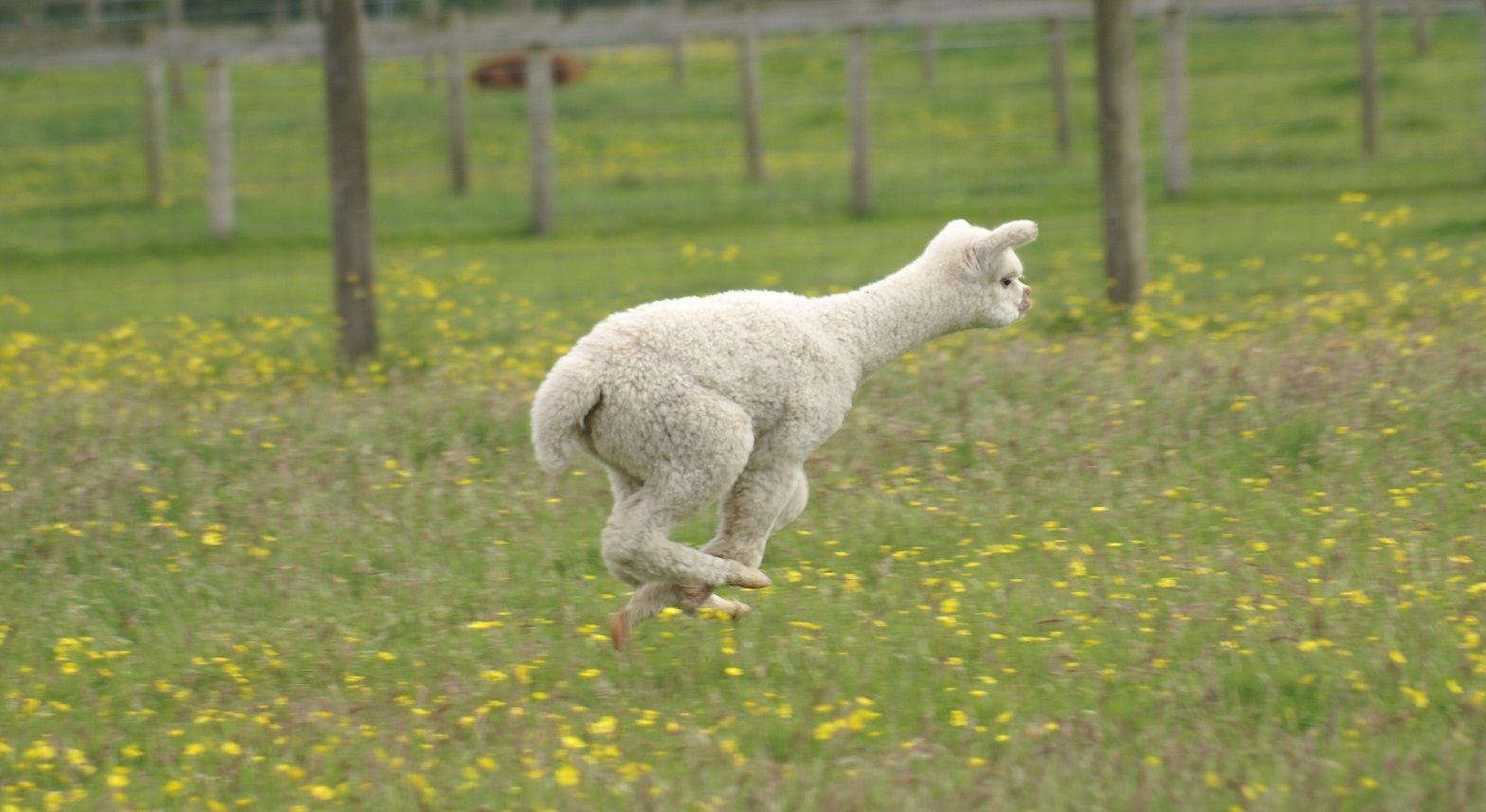 I have been rather busy since my last blog and I am somewhat sleep deprived, but its all been rather exciting.

Firstly the trip down to Heathrow Airport to collect the new studs went well, Ian and I did a few trips around the same roundabouts (blame it on the Sat Nav) but we arrived in good time. The alpacas all appeared to have endured the long journey from New Zealand in good health. However it was 1.30 am before we left the airport with our alpacas and paperwork, and poor Ian had to drive through the night. We arrived home at 7.45am and whilst I could have fallen asleep standing up (I had been awake for 26 hours by now) I could see that we were going to have a birth…or two. So it was I managed to get some sleep after 31 hours. 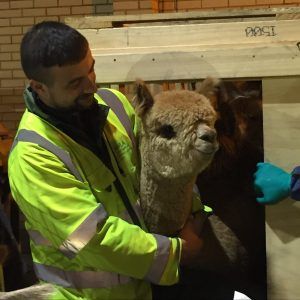 Saturday it was yet another early start when at the 5am check, I saw that Prophecy’s Desire was about to birth. She delivered a very handsome grey male (sire: EP Cambridge Gunsmith) for her owners, Prima Alpaca. Somehow it didn’t seem worth going to back to bed, especially as I had a hair appointment…a restyle…ready for the TV crew. 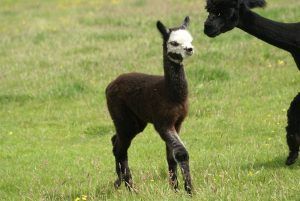 On Sunday Kurrawa Legend’s Crusader had his first date with Beck Brow Trendsetter our championship winning white female (sire: Beck Brow Explorer) whilst Gilt Edge Samurai watched. Samurai isn’t quite two yet so we weren’t sure if he would be interested…he definitely was.

So it is Monday and the TV crew are coming to record a piece about the new studs arriving from New Zealand/Australia. I wake up at 5am with a stomach bug…one where it is difficult to leave the bathroom never mind tend to the alpacas. Luckily the reporter attending the farm on behalf of ITV is friend and fellow breeder Kim Inglis of Blencogo Farm Alpacas, and with Robyn on standby, we manage to record a piece. This was before the shearer arrived to shear the two new boys…I then go to sleep and don’t wake up for 17 hours!!

For those who haven’t seen the article about the boys arriving I will put a link on our news page.

By Wednesday morning I was feeling a little better but not 100%, however I was looking forward to Sarah and Peter (Gilt Edge Alpacas) and Toni and Greg (Waters Edge Alpacas) calling in as they passed on their travels from Scotland to the Lake District, having arrived from New Zealand via France and Italy (to name but two). Of course when you have a free day you never get a birth, and when you have visitors expected and would like to prepare some lunch…you have three. The time went far too quickly and It would have been nice to have spent longer chatting about alpacas…hopefully next time.

Obviously deciding it is much more fun birthing when I am already busy we had a repeat performance on Saturday. With drive-by matings booked in, the first to go into labour was EP Cambridge Stargazer (sire: Windsong Valley Firedragon) who was rather premature with her dates…unfortunately it soon became apparent that all was not well when the placenta appeared first…sadly the male cria had been dead for at least 24 hours. A failed placenta seems to have been the case. She is having antibiotics.

Our stud service clients arrive and only have time to unload, before they see their very first birth. We really couldn’t have planned it any better. We then have the ladies meet their dates, have a look around the farm, and wave goodbye. Back to the birthing paddock and Beck Brow Hallelujah is obviously in labour. This is Beck Brow Explorer’s first daughter and this will be his first grandchild…

Whilst we are checking Hallelujah, we receive a call from our clients (who have only driven up the road) to ask if they may discuss the purchase of some females that they have spotted. So they get to see their second ever birth on the same day, and drive off with two of our top females from our show team…obviously catch me when I am multi-tasking and take them before I change my mind 😉

At 9pm, after a somewhat busy day, we do our final check of the paddocks…to find Beck Brow Bees Knees (our star cria of the year so far) struggling to breath. He was rasping so loudly, no stethoscope was required to know he was struggling. With a raised respiratory rate and slight temp (39.4) with suspected a chest infection (although we had seen him earlier and he seemed okay) We gave him Flunixin (non-steroidal anti-inflammatory) to reduce the inflammation in his bronchioles, gave him an antibiotic and tucked him inside for the night. He was still drinking from his mum which was a good sign. When I got up in the middle of the night to check on him…he was fine. The antibiotic could not have worked so quickly so I can only assume he had had some kind of anaphylactic reaction to something?…phew.

He he is today… 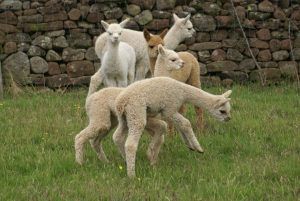 So far we have twenty three cria and have thirty three left to birth on the farm (we did start with 60 but lost twins, one female has sat so isn’t pregnant, and we have sadly lost 2). We are rather boy heavy, fourteen of the cria born belong to us – eleven boys and three girls. Some photos of some of the cria…

The first to birth on Wednesday was Bozedown Anything Goes, a female we purchased at the Alpaca Classic last year. Whilst I knew she was in labour, I didnt actually witness the birth as she just had him without any fuss, he was straight up on his feet and drinking within half an hour. I love this female she has settled into our herd so well. We have named the cria Reno (I know it is a female character in the musical but we will ignore that) a lovely looking male by Bozedown Achilles. 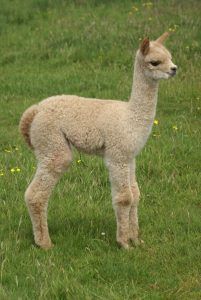 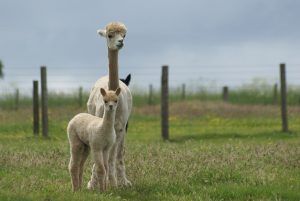 Hettie has witnessed two births and absorbed every detail. Searching in the birthing box she decided to check out the new born to ensure it was well… 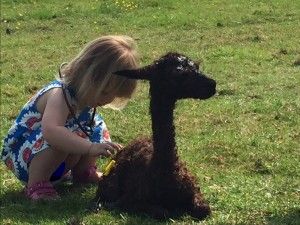 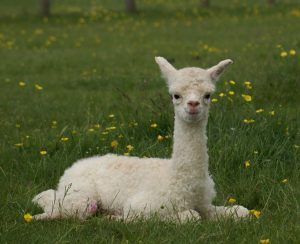 Beck Brow Arizona arrived rather early (325-days) but has done well. This little man looks special, sired by Explorer and with EP Cambridge Samson on his dams side, he has EP Cambridge Spartacus on both sides of his pedigree. He has incredible organisation even in his tail fleece (pictured 36 hours old) 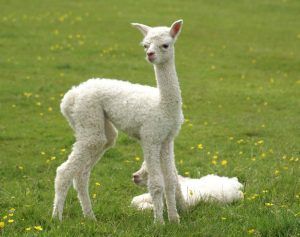 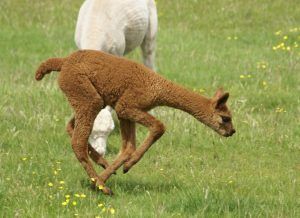 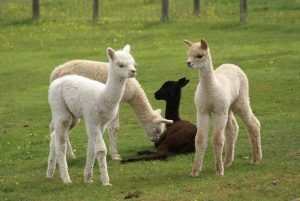 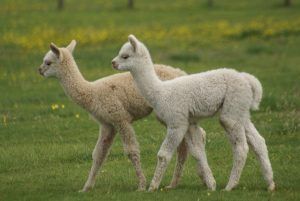 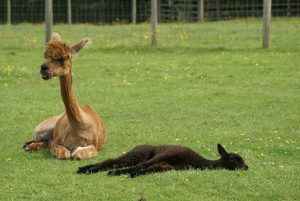 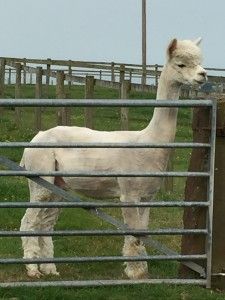