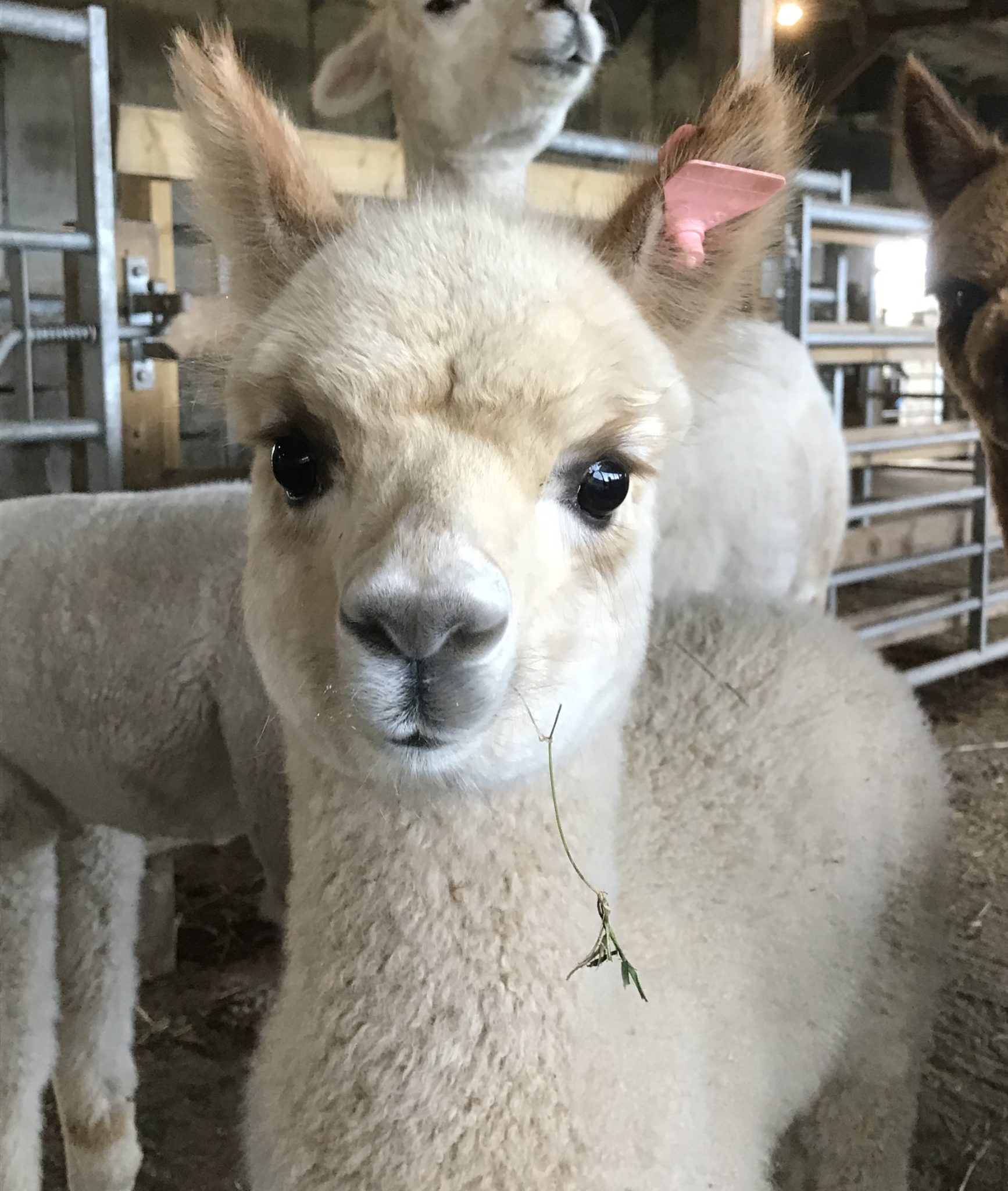 Now that birthing and stud services are over for the year, we are starting to catch up on some of the other tasks on the farm. I am pleased to report that the skip did get filled, and that we have a couple of near empty sheds (how long will that last!). Paul has been working hard (although he is in his element) having hired a digger and dumper truck for a week. We had a tonne of stone delivered which he has distributed in all the gateways ready for winter, hopefully this will mean I won’t be slipping on to my back into muddy puddles this year. He is now digging in some more water pipes in the far paddocks and some drainage pipes for the guttering on the far belters (although I though that was why he had hired the digger!) 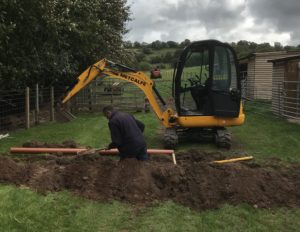 We did some pregnancy scanning earlier in the week. As our ultrasound probe had yet another air bubble in it, I decided to order a Pregtone doppler scanner. I must say that the Pregtone is easy to use, okay you end up smelling like a chip shop (we used Crisp and Dry as the contact agent) but we picked up the pregnancies quickly. Whilst we rely on spit-offs generally, there are always those who are not clear to read. Beck Brow Ditto was one of those, spitting and sitting. Unfortunately she would appear not to be pregnant, so will remain with us until next year (she was sold). Beck Brow Glitterati (National White Female Huacaya Champion 2017) had been sitting all summer, spitting occasionally but never two weeks in a row. Thus a trip to see Claire Whitehead (alpaca specialist vet) was on the cards for the spring. However, to our deligh,t she is producing a clear pregnancy tone (I have tested her on three occasions as I couldn’t believe my ears). We all know Bozedown Blaze of Glory is one handsome male, obviously Glitterati thought she would have a few extra dates! Very much looking forward to the results of pairing these two BAS National Show champions. 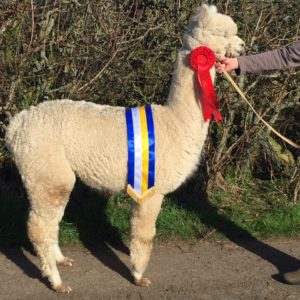 Having decided that you can never have too much alpaca, we now have an alpaca mattress topper, duvet and pillows. Sheer luxury from Penrose Products. It is amazing to think that just a few years ago there was no market for our second and third grade fleece. Now this British company is winning awards at the highest level for its fabulous bedding products made from alpaca. Millie is seen giving her approval (Millie is the reason we have a super king size bed – okay she doesn’t take up much room but she is a fidgit!) 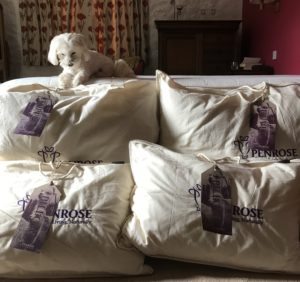 Penrose Products get the Millie approval

On a more serious note: Where I can, I try to keep this blog free from politics. Thus I have so far not mentioned the case of Geronimo, nor have I commented on any Facebook related posts. For anyone unfamiliar with Geronimo I have given a snapshot of the story, as I see it,  in italics below.

Geronimo is a male who was imported in to the UK from New Zealand in the late summer of 2017. As is routine, all of the alpacas being imported were skin tested for bovine tuberculosis (bTb) prior to export (this included our Suri stud male Kurrawa Hell Raiser). The alpacas were primed with tuberculin, prior to the skin being measured a few days later. This is to look for a reaction to the primer which is seen as a positive result. Once in the UK the owner of Geronimo decided to test him again using the Enferplex blood test ( a test which relies on antibodies for detection of the disease). Geronimo failed this voluntary test and entered into the protocol devised by DEFRA/APHA. This meant that he had a further compulsory primed test, which he again failed. Geronimo is still alive and showing no signs of disease at this moment. Whilst DEFRA/APHA have given notice to slaughter Geronimo, his owner is requesting further testing and research as it is believed that multiple priming has caused a false positive result.

We unfortunately became involved in the Geronimo situation recently, and as this has been referred to in the latest Alpaca magazine, I thought it best to clarify our position: just a few weeks ago, we were rather surprised (an understatement) to hear that the alpacas who were imported with Geronimo in 2017 were to be compulsory tested by DEFRA/APHA, especially as we believe that this was instigated as a response to someone else’s request.  Although we could have refused to have Hell Raiser tested, we would have been placed under restriction had we done so (the protocol says tracings should only take place after the index animal – Geronimo in this case -has been culled and proven to be positive on culture). We regularly Enferplex test and were happy to voluntarily test Hell Raiser. But now we had been forced into a situation where he had to be primed before testing, something that the Geronimo case is fighting against because of the perceived risk of false positive results. Of course Hell Raiser had been previously skin tested, and thus primed, prior to export.  It seemed incredible that Hell Raiser (and potentially our whole herd) had been put in this position of being forced to have primed testing done without any evidence for it.

We Immediately complied with DEFRA/APHA and Hell Raiser was primed and skin tested, followed by a Enferplex blood test 28 days later. Hell Raiser had already passed a voluntary non-primed test the previous month, but we were not allowed to use this once in the compulsory system. Our regular surveillance testing did mean that we weren’t overly concerned, but it was disappointing to put Hell Raiser through  unnecessary additional  testing and priming. Thankfully, as expected, Hell Raiser got the all clear a couple of weeks ago. I can only say that APHA were very helpful under the circumstances. We hope that Geronimo may be tested again and be clear. We will continue to do regular surveillance, and have more Enferplex tests due tomorrow. 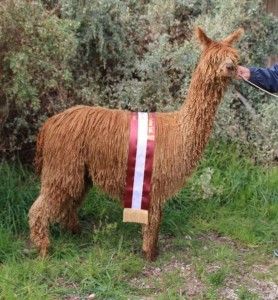 We continue to weigh the cria weekly (fridays is my favourite day) and they are all doing really well with good weight gains. Smitten Kitten has had a small umbilical herniation and has been wearing a belt. We will check it in the morning, and if it is still there we will ask our vet to check her whilst she is here. We have started winter AD&E paste/injections for everyone on the farm. A couple of the cria have had injectable AD&E and phosphate for slight front leg deviation (always the very dense fleeced ones). We have shown our 2018 cria to a lot of experienced breeders who have visited the farm, and whilst we are fortunate enough to have a number we consider special, it is always Beck Brow High Jinx (beige) who wins the vote. Her fleece is very advanced but as she is not for standing still, I haven’t yet got a photo that does it justice (we need three people for sure) 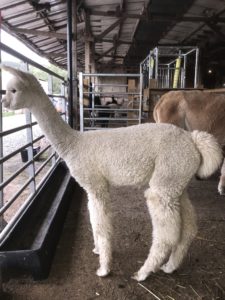 We have even managed a bit of leisure time, and treated ourselves to a rather nice tasting lunch at Forest Side this week. We have also had some grandparent time. With Hettie 4 years old, Theodore 23 months and Toby 5 weeks, Robyn and Craig are kept busy. 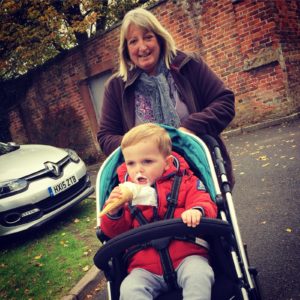 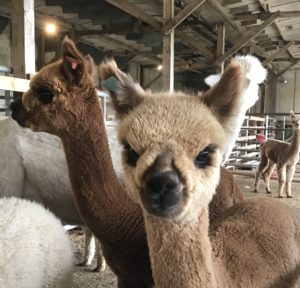 Getting ready for a girls week away from next Friday, need to get to the charity shops for my murder mystery character fancy dress. Some old dowager. The old bit I have covered, the rest will require imagination.  The nursing gang have been going strong for many years now…however the PJ’s come out earlier in the evening as each year passes!

Finally a couple of photos taken in the evening light… 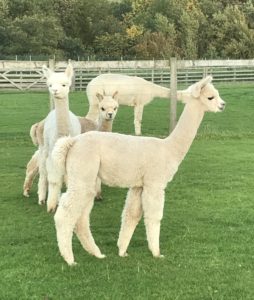 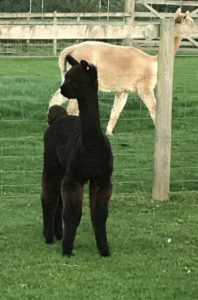 Categories: Blog
It’s a Wrap-Blaze of Glory and Haylage!
Edge Of Glory and Chaos come to Beck Brow